Schneider will be part of the show’s “Tournament of Champions,” and is the first trans person to qualify

One word made all the difference Wednesday on “Jeopardy!”

Champion Amy Schneider’s dazzling streak on the quiz show is over, snapped by a Chicago librarian after 40 consecutive wins and nearly $1.4 million in prize money.

Schneider’s success put her in the ranks of Ken Jennings, who's serving as guest host, and the quiz show’s other all-time greats. It also made Schneider, a trans woman, a visible symbol of achievement for often-marginalized people.

“It’s still a little hard to believe," she said of her impressive run. "It's something that I’m going to be remembered for, and that’s pretty great," 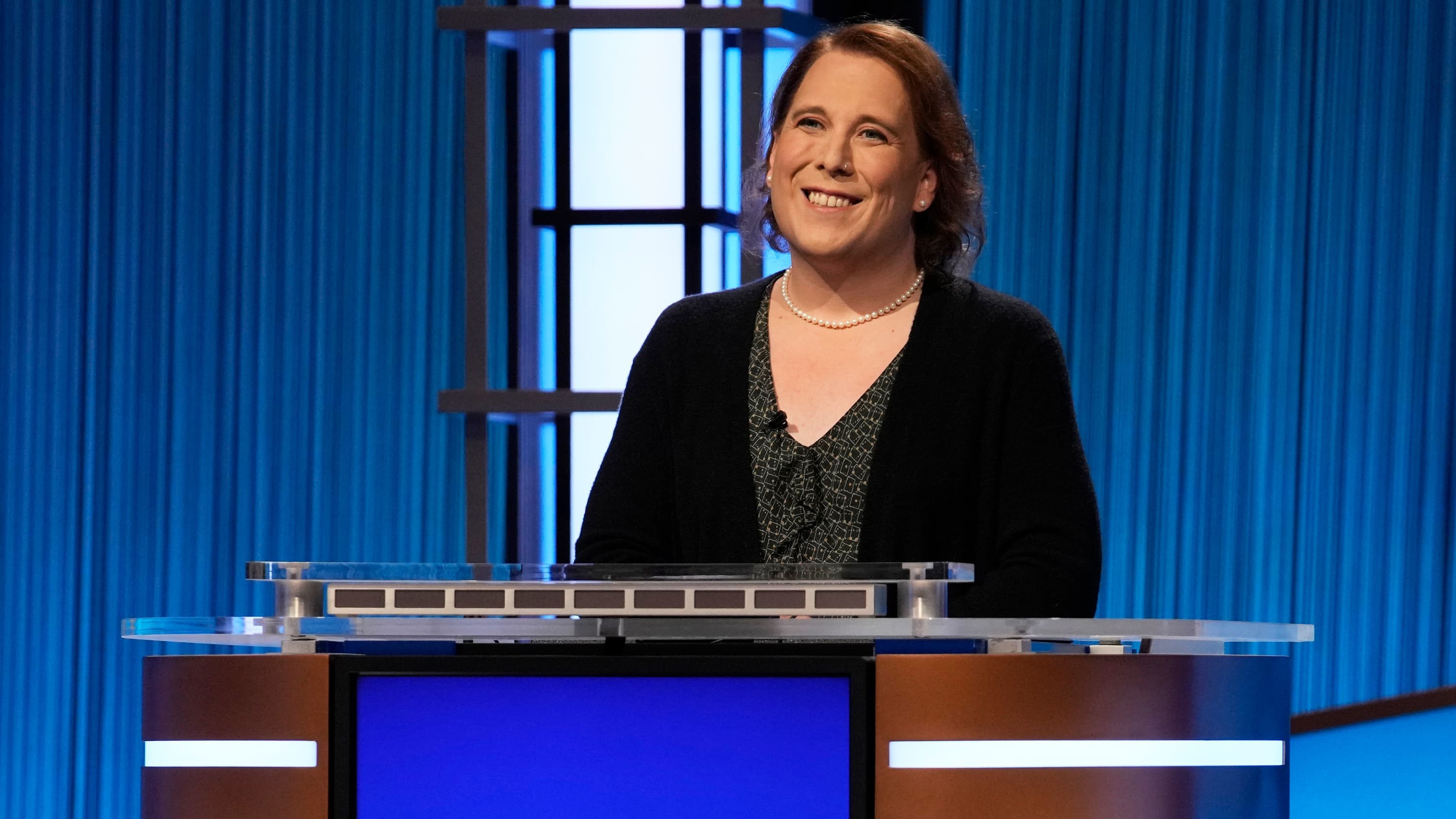 ‘Jeopardy!' Champ Amy Schneider Becomes No. 2 on All-Time Wins, Behind Only Ken Jennings 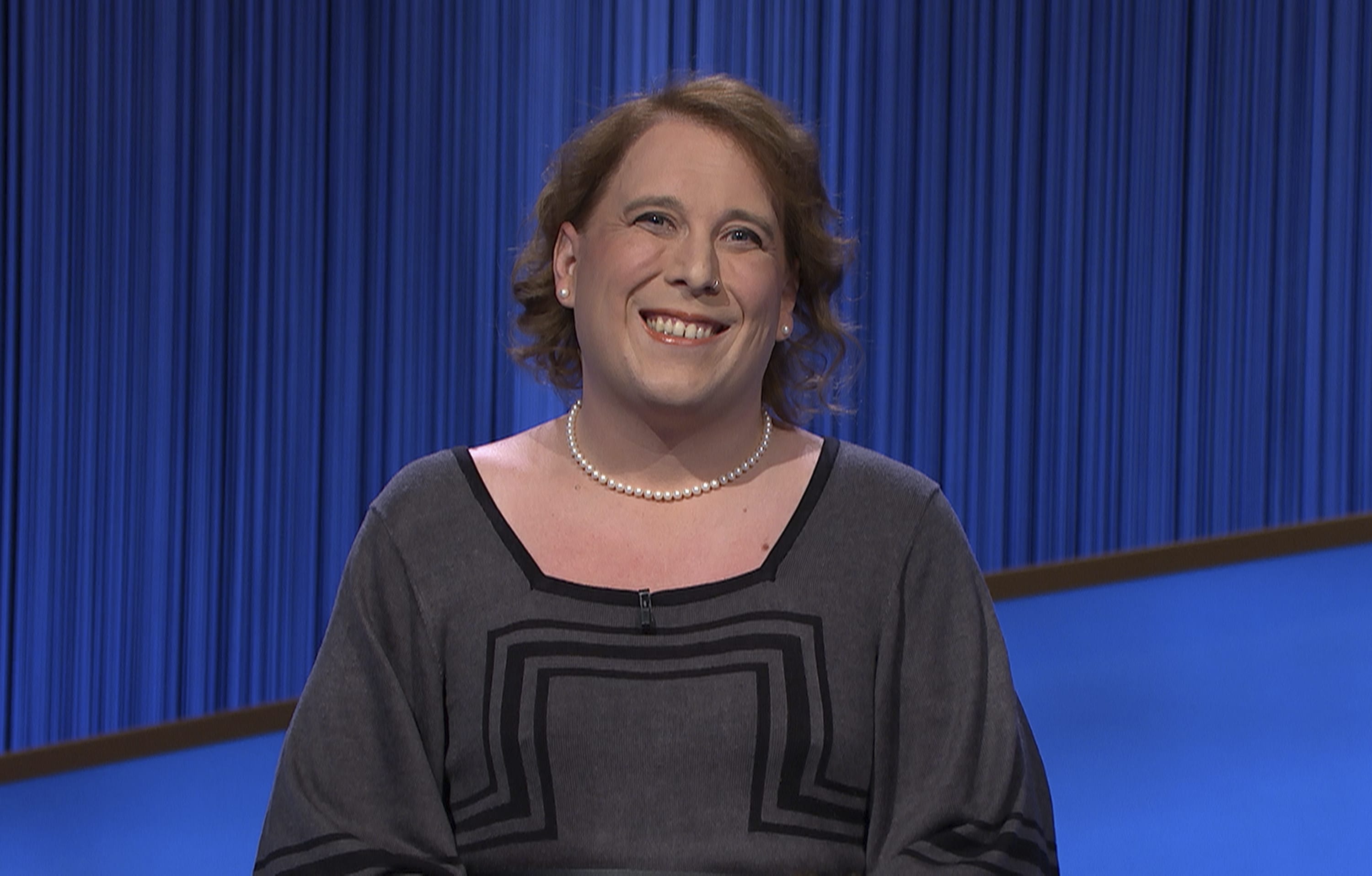 Amy Schneider's More Than $1.1 Million in ‘Jeopardy!' Winnings Will Come With a Hefty Tax Bill

New champ Rhone Talsma had the correct response to the final “Jeopardy!” clue for a winning total of $29,600. Schneider, who found herself in the unusual position of entering the last round short of a runaway, was second with $19,600.

“I’m still in shock,” Talsma said in a statement. “I did not expect to be facing a 40-day champion, and I was excited to maybe see someone else slay the giant. I just really didn’t think it was going to be me, so I’m thrilled.”

Schneider told The Associated Press that Talsma played well and did a “great job of taking the opportunities when they came up and putting himself position to be able to win.”

The answer that stumped Schneider was about countries of the world: The only nation whose name in English ends in an “h” and which is also one of the 10 most populous. (Cue the “Jeopardy!” music — and the response is, “What is Bangladesh?”)

Among her immediate reactions when the game and her streak ended: She was sad but also relieved that “I don't have to come up with any more anecdotes," the stories that contestants share during game breaks.

Contestants receive their winnings after their final game airs, and Schneider’s spending plans include clothes shopping and, especially, travel.

An engineering manager and Dayton, Ohio, native who lives in Oakland, California, Schneider's regular-season play made her No. 2 in consecutive games won, placing her between Jennings with 74 games and Matt Amodio, winner of 38 games in 2021.

Schneider will be part of the show’s “Tournament of Champions,” and is the first trans person to qualify.

She was braced for her streak to end, she told AP.

“I had a feeling my time was winding down, even though it didn’t look that way in the scores,” Schneider said. The routine of traveling to Los Angeles for tapings — five shows a day, two days a week — was tiring, and that took a toll.

After she surpassed Amodio's tally of consecutive victories, she added, the prospect of trying to break Jennings' long-standing record was “hard to imagine."

Schneider’s depth of knowledge, lightning-fast answers and gracious but efficient manner won her a devoted fan base. Comedy writer Louis Virtel, a former “Jeopardy!” contestant, tweeted earlier this month that Schneider was like a “case worker assigned to each episode, and when she’s done she picks up her briefcase, nods, and leaves.”

She was also admired for her handling of anti-trans trolls, with one measured reply prompting a shoutout to her from writer and Broadway star Harvey Fierstein.

“The best outcome of all of this always is going to be whatever help I’ve been able to offer the trans community,” Schneider said. “I’m here because of the sacrifices countless trans people have made, often to the extent of risking their lives. To do my part to move that cause forward, it’s really special.”

Schneider has a message for “Jeopardy!” viewers who will miss making her part of their daily routine: “I realized that I am really just so sad for all my fans. ... I want to thank them for all their support, and tell them that's it's OK.”

The streaks by Schneider and Amodio have helped ease “Jeopardy!” past the mishandled replacement of its admired host, the late Alex Trebek. Executive producer Mike Richards was picked by Sony Pictures Television to replace Trebek last year, but quickly exited the show after old podcasts surfaced that included his misogynistic and other demeaning comments.

A permanent host has yet to be named, with Mayim Bialik, who was named host of prime-time “Jeopardy!” specials, and Jennings trading off this season. Jennings is also a consulting producer for the show.