Attorneys representing Black Lives Matter in Los Angeles have again asked a federal judge to restrict, or enjoin, LAPD officers from using certain “less lethal” weapons when trying to control or disperse street protests, citing the city’s own after-action reviews that found some officers’ use of the weapons at demonstrations last summer were improper.

“Temporarily enjoining the use of the 40 and 37 mm weapons – which the LAPD’s own commissioned report indicates officers are not reliably trained to accurately or appropriately use anyway – in this way is appropriate,” wrote attorneys Paul Hoffman, John Washington, and Carol Sobel, who are representing BLM.

Three so-called "after action" reports have now been made public, and all point to problems at the LAPD related to crowd control, training, and planning, not to mention the multi-million-dollar cost to business owners and taxpayers. Eric Leonard reports for the NBC4 News on Tuesday, April 13, 2021.

The new request was made to U.S. District Court Judge Conseulo B. Marshall, who declined to take action on a similar application in June 2020 when BLM claimed LAPD officers had misused the weapons during demonstrations that followed the killing of George Floyd in Minneapolis.

Numerous, lengthy new legal filings from the group say the City of Los Angeles has essentially admitted, in an after-action report authored by former LAPD constitutional policing advisor Gerald Chaleff, that officers misused the launchers in crowd control situations, and claims officers have continued to misuse them during recent protests against City efforts to clear homeless encampments in Echo Park.

“The Chaleff Report and the new evidence before the Court demonstrate the essential need for such training and the need for experienced and informed supervision over the use of these potentially lethal weapons,” the BLM lawyers wrote. 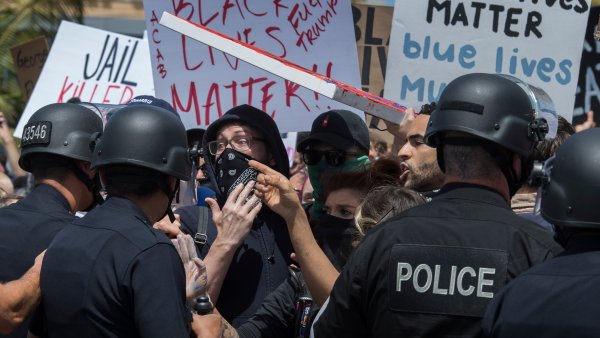 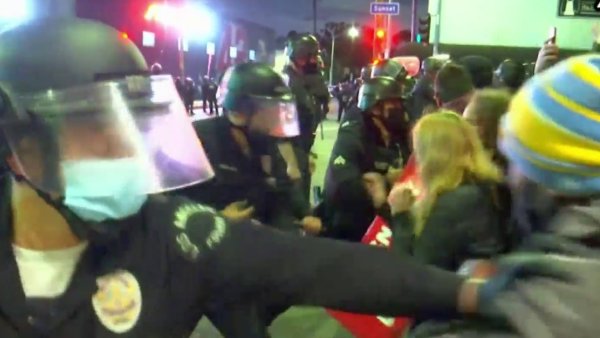 On Tuesday, before the new BLM court filings, LAPD Chief Michel Moore said he anticipated the “less lethal” launchers would still be used in protest situations in which officers were being attacked, such as when rocks or homemade weapons were thrown at police lines.

“We have more than 100 officers that suffered injuries as a result of that protest period, including fractured skulls, broken legs, lacerations, and cuts, we still have people recovering from those injuries,” Moore said.

“We relied upon the less lethal weapon systems in lieu of taking that weapon system away and having the officer with no other defensive defensive weapon other than a firearm,” Moore said, but added they would not be used, “blindly,” or without restraint.

The LA City Attorney’s Office urged the judge to reject the request, saying the group’s proposal would leave officers with fewer options when encountering violent individuals within a larger crowd of peaceful demonstrators.

“The Plaintiffs’ proposed order would hamper the Los Angeles Police Department and prevent the use of less-lethal munitions when lethal force is not warranted,” said Deputy City Attorney Gabriel S. Dermer.

“The LAPD endeavors to allow peaceful protests to continue, and the 40mm tool assists officers in this endeavor when persons committed to violence put public safety at risk,” he said.

The City Attorney’s Office and the LAPD did not immediately respond to requests for comment.