The Los Angeles County District Attorney's Office denied Friday it had been asked to consider filing criminal charges in the robbery and murder of off-duty LAPD Officer Fernando Arroyos, who was shot to death during a gunfight with alleged gang members Monday in a South Los Angeles neighborhood.

The DA's Office said in a email that it was never consulted on potential criminal charges before the LA County Sheriff's Department, which investigated the murder, presented its evidence to the U.S. Attorney's Office, which announced Thursday the four people arrested in the case would face federal racketeering allegations which could lead to death sentences. 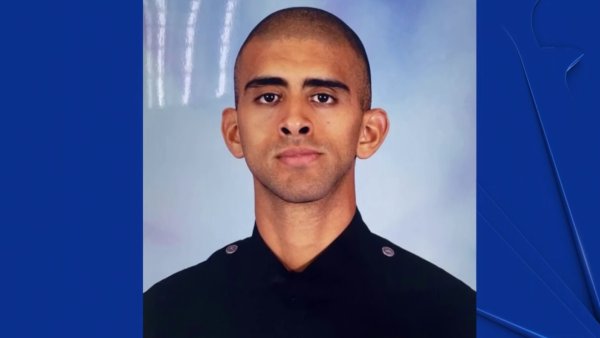 “It was indicated to us that the case was referred to Federal authorities, who filed charges. As such, we did not have an opportunity to review the case," said Alex Bastian, Special Advisor to District Attorney George Gascón.

Multiple law enforcement sources disputed the DA's account, telling the NBC4 ITeam that while there may not have been a formal presentation of evidence, there were numerous discussions earlier this week between investigators and DA's office personnel about the facts of the case and the potential charges involved.

"Well, we definitely had conversations with the local DA. And their response was not satisfactory to the gravity of the situation," LA County Sheriff Alex Villanueva told reporters at a Thursday night press conference.

Fernando Arroyos, 27, a three-year veteran of the LAPD, was shot about 9:15 p.m. Monday in an apparent exchange of gunfire with as many as three armed robbery suspects in the unincorporated Firestone-Florence neighborhood. Robert Kovacik reports for the NBC4 News on Wednesday, Jan. 12, 2022.

Villanueva said his detectives opted to take the case to federal prosecutors because the DA would refuse to file certain enhancements under California law that would elevate the severity of punishment for anyone convicted of the murder.

The LA County DA's Office has a unit dedicated to investigating and prosecuting attacks on law enforcement, called "CAPOS," or Crimes Against Police Officers.

The unit dispatched two of its prosecutors to the scene of the Arroyos murder, and members of the unit participated in discussions on Tuesday and Wednesday about gathering the evidence necessary to file state criminal charges, the sources told NBCLA.

Upon taking office a year ago Gascón instituted a variety of reforms aimed at reducing many criminal penalties, including blanket orders that prohibited prosecutors from filing most sentencing enhancements, which can amplify prison time when crimes involve gangs, guns, repeat offenders, or special categories of victims.

"I believe their plan was just prosecute a simple murder with no gun enhancements, no gang enhancements, nothing. And that did not really cover the depravity of this crime," Villanueva said.

Arroyos died at St. Francis Medical Center after he was shot Monday night in the 1700 block of E. 87th Street while looking for a house for sale with his girlfriend.

The federal criminal complaint filed Thursday accused three men and a woman of participating in the robbery and murder of Arroyos in furtherance of "Florencia 13," a multi-generational street gang that was previously the target of federal organized crime investigations.