Big Bank Earnings Begin. What Cramer and Other Market Analysts See Ahead

Big banks could be in for a strong earnings season, three market analysts say.

JPMorgan, Citigroup and Wells Fargo kicked off the flurry of reports on Wednesday with their second-quarter results, all beating expectations thanks to better-than-anticipated loan losses.

Here's what CNBC's Jim Cramer and two top bank analysts made of the reports:

Cramer, the host of CNBC's "Mad Money," noticed a shift in investor sentiment toward the group:

"We're going from companies [where] we've kind of said, 'You know what? Those banks really aren't that great,' to saying, 'Wait a second. Wait a second. Wells Fargo and Citi are cheap versus the others because they haven't been doing that well.' I mean, I'm looking at Wells Fargo and I'm saying, 'Eh, nothing special, nothing special, but they beat on [revenue], they beat on expenses, they beat on net interest income,' and then I realize, wow, that's what you want. It's the trifecta. [CEO] Charlie Scharf. He's back. He's bigger than ever. … To me, it is still a pitiful, helpless giant. But the fact is that he, Charlie Scharf, is making it more efficient and, by the way, honest." Home Purchase Cancellations Are Above 15% for the Second Straight Month. It's Important to Know the Financial Repercussions 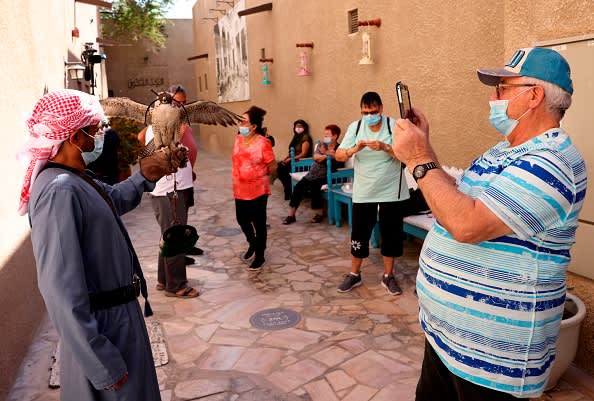 The UAE Is Scrapping Its Covid Mask Requirements After 2.5 Years

"When you look at the comps depending on what type of business line, they are either easy or difficult. And if you compare the trading results to the first-quarter levels of '21, those were difficult comps. Investment banking … especially on a year-over-year basis, those comps were quite strong. But what's interesting to us [is] … [JPMorgan CEO Jamie Dimon] was quite optimistic about the outlook for the economy and that tells us loan growth will start to materialize later this year and next year. In particular, if you look at JPMorgan's credit card receivables – this is the primary source of consumer borrowing – on an end-of-period basis, they were up 7%, 28% annualized. So, we anticipate you're going to see more of that from the other companies like Bank of America, Wells Fargo and Citi that report … in the next day or two."

"We'll see what others bring, but certainly as we look out into later this year and into next, we do foresee loan growth accelerating. Loan growth has historically been a lagging economic indicator and all forecasts have the economy continuing to grow and we expect loan growth to follow. … I think clearly, the investment banking and trading business, while it could be certainly down in the back half of the year versus the first half of the year just given the record first half we've seen, should remain strong. And then on the traditional activities, we think there's room for loan growth to accelerate. Credit quality remains pristine. And I think at this point, interest rates have a lot more room to move higher than lower, and given the vast majority of banks remain asset sensitive, they should benefit from an ultimate increase in rates and steepening in the yield curve. Obviously, rates have come in of late, but certainly, we think there's more room for them to move higher over time."