Teacher Travels Through YouTube on His Distance Learning Bus

He sits behind the wheel and looks ahead as he starts to bounce in his seat.

Some would think Brent Ford may have been socially distancing for too long.

“Yeah, hey, it’s Brent Ford with Distance Learning Bus,” Ford screams at no one in particular.

However, Ford isn’t going anywhere on his Distance Learning Bus. The bus is an old wooden cutout of Scooby Doo’s Mystery Machine. It’s sitting in El Cajon Valley High School’s Arts, Media, and Entertainment studio. However, Mr. Ford and Emilio Martinez are the only people here.

“Six months is a long time to go without students being on campus,” said Ford, who is also a Special Education teacher. 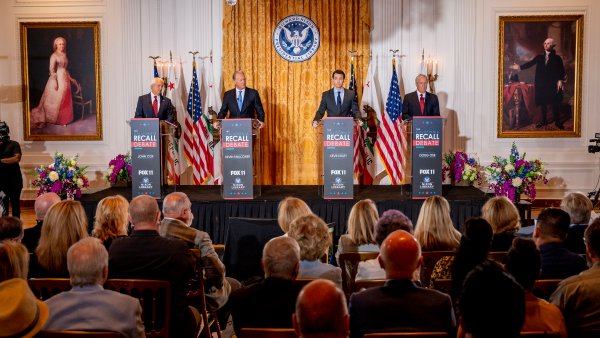 Republicans Aim at GOP Base in 1st California Recall Debate

One day Ford and Martinez were goofing around with the cameras and the Mystery Machine when they accidentally streamed the video live on YouTube.

“Hey you over there! Get on Distance Learning,” Ford would scream in the video.

Amazingly, people shared the live stream on Facebook, too.

“It was on from there and then people were like, ‘Can you please do more of these videos?’” Ford recalled.

Now, Ford and Martinez regularly produce Distance Learning Bus videos featuring Ford interviewing someone from the school or the Grossmont Union High School District. Ford saw YouTube as a great way to reach his teenaged students. Martinez mounts a GoPro on the back if his car and records a route that is superimposed in the background behind Ford and his guest.

“I thought if I could be goofy enough to infiltrate the kids’ concepts then they could get some distance learning,” he said, still holding onto the fake wooden steering wheel. “The whole thing is: Let’s have a good time with distance learning. It’s all we’ve got right now.”

While the videos are goofy, they are also informative. They touch on different subjects for students stuck at home during the pandemic.

Ford and Martinez have produced more than a dozen videos and they say they’ll continue to make more. However, Ford said he’d park his Distance Learning Bus for good to have his students back.

“Absolutely, I mean, I became a teacher not because I like to sit here by myself on the distance learning bus, but because I love interacting with the teenagers," Ford said.