Brush fires broke out during hot and dry conditions in Riverside County.

Additional evacuation orders were issued Saturday in response to the 12,000-acre Apple Fire, burning at 0% containment in Cherry Valley, which has charred at least one home and was threatening at least 2,586 homes .

Residents north of Wilson Street, east of Sunset Avenue and west of Hathaway Street in Banning, were ordered to evacuate about 2:15 p.m. as flames crept toward the neighborhood, according to the Riverside County Emergency Management Department.

About 7 p.m., residents were put on notice they should be prepared to evacuate with little notice from the area north of Morongo Road east of Millard Canyon Road, west of Whitewater Canyon Road.

Also under evacuation orders since Friday were residents in the Banning Bench area and those north of Cherry Valley Boulevard between Beaumont and Highland Springs avenues, the Riverside County Fire Department said.

Fire officials estimated that thousands of people have been evacuated and said they do not have a time frame for repopulating evacuated areas.

A hard road closure was in place along North Sunset at Wilson and North San Gorgonio Avenue at Summit Drive, according to the Banning Police Department.

Fire officials said a single-family home and two outbuildings were destroyed near Avenida Miravilla, adding to the destruction of a few cars, a structure and a boat reported Friday night.

Initially, two possible arson fires were reported at 5 p.m. Friday in the area of Apple Tree Lane and Oak Glen Road on the north end of the unincorporated community bordering Beaumont, and merged into one by 5:45 p.m., the RCFD said.

A third possible arson fire was also reported in the area and had blackened 60 to 80 acres by 7 p.m., according to reports from the scene. Firefighters sent to the location encountered the three blazes coalescing in a drainage with heavy vegetation.

A temporary evacuation center was established at Beaumont High School, 39139 Cherry Valley Blvd., with anyone going there subject to COVID-19 testing before being allowed in, fire department spokesman Fernando Herrera said.

The American Red Cross was assisting evacuees by putting them up in hotels.

The South Coast Air Quality Management District issued a smoke advisory through Saturday evening for the Coachella Valley, San Gorgonio Pass and Hemet-San Jacinto Valley due to the fire. The agency urged residents in the area who smell smoke or see ash to limit their exposure by remaining indoors with windows and doors closed or to seek alternate shelter, and avoid vigorous physical activity.

As of 4:30 p.m. Saturday, 43 engine crews and 10 hand crews from the RCFD were on the ground battling the blaze, totaling 375 personnel. 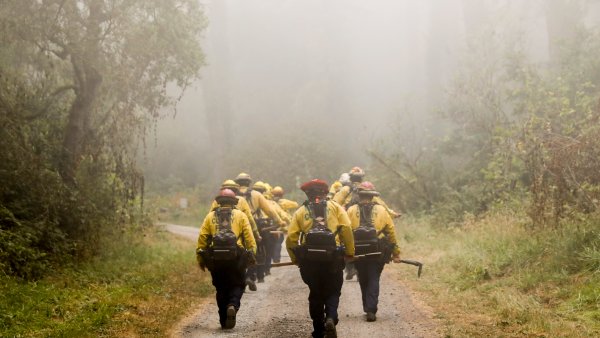 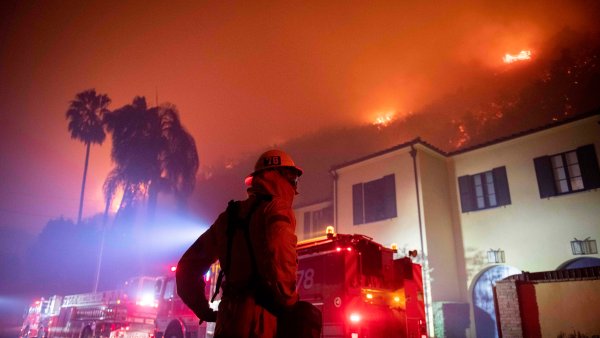 At the request of the fire department, Southern California Edison turned off electricity along Oak Glen Road and surrounding side streets to prevent additional fires from breaking out as burned power poles collapsed and dropped transmission lines.

The practice is known as a ``public safety power shutoff.''

Witnesses called 911 as the fires started, stating a man was seen walking along Apple Tree Lane, igniting each blaze. Arson investigators were dispatched to the area and an investigation into the cause was underway.