“Somedays I just sit here and look out the window. If it weren’t for my family and friends who contact me every day ... I would probably cry every day because it’s been so tough," Erika Gomez said

But after more than 40 days of government-ordered quarantine -- meant to protect her and other healthy residents from getting coronavirus -- the typically upbeat 24-year-old Kindergarten teacher may be nearing a breaking point. 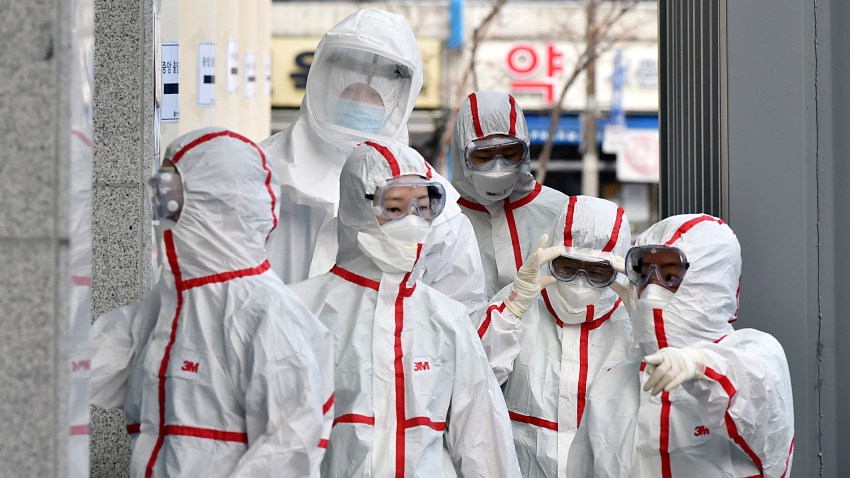 Coronavirus Cases in US, Elsewhere Rise as China’s Crisis Wanes

“Somedays I just sit here and look out the window," Gomez said. "If it weren’t for my family and friends who contact me every day, Facetime me, I would probably cry every day because it’s been so tough.

"I’ve talked to somebody face-to-face only twice in 40 days."

Gomez is in Yinchuan with a program, through her Riverside County school in partnership with the Chinese government, that has allowed her to teach English to kindergarteners for the last two years -- that is until 40 days ago when the city shut down and her school was closed.

Yinchuan: A City at a Standstill

Yinchuan with a population of nearly 2 million, is more than 900 miles from the epicenter of the deadly coronavirus outbreak that has since spread to more than 60 countries including the United States.

Despite the distance, the government is taking precautions to prevent its spread. Modes of transportation, including trains, planes and even taxis have been halted to Yinchuan.

Residents are forced to stay within their apartment and can leave only under tight restrictions -- a guard and a health care monitor posted at the front of her building ensure tenants are following the rules.

Gomez has a government-issued voucher that gives her limited permission to leave her building and go to a market a few times each week.

“Every time I exit my apartment, they check the voucher and then when I come back inside, they check my temperature and stamp my voucher," Gomez said. "The market is pretty much the only place I can go because the restaurants aren’t open. The shopping malls aren’t open."

Video shared with NBC 7 showed suited health officials at her gate. Once Gomez reached the streets of Yinchuan, they were mostly deserted.

Erika Gomez, a 24-year-old English teacher from Southern California living in China has been quarantined in her studio apartment for 40 days. She shared her experience as the coronavirus continues to spread around the world.

Visitors are also not allowed within her apartment building. And even if they were, similar restrictions regionwide means there are few people who would be able to visit her anyway.

The first person she was able to see in weeks was her school's director.

"He couldn't even come inside my apartment so we were outside and we were just talking and I just busted out crying," Gomez said. "I said 'I'm so sorry, I don't even know why I'm crying.' It's just the first person I'm seeing in person, face-to-face and not through a computer screen."

A Day in the Secluded Life

Here's how the Chinese government recommends washing hands due to the coronavirus outbreak. Erika Gomez, who has been stuck there for weeks, says she thinks the government is doing the right thing.

Gomez starts a typical day making coffee, lots of coffee -- four cups to be exact because what else is there to do. Then, she does some yoga, binge-watches a few television shows and, as of late, learning to draw.

“It helps to learn a skill in quarantine,” she jokes.

One of the highlights of her day: taking out the trash. She never could have anticipated saying that before the quarantine but that moment gives her about a minute of freedom outside her building.

But, what has helped her the most to get through the loneliness is staying in touch with family and friends through technology.

At night, she even finds comfort by falling asleep with another friend on the other end of the phone or computer — just to have a human connection.

“I Facetime my other foreigner friends who are stuck in quarantine and we’ll probably leave the phone on the table like we are talking right now and sometimes just lay down in silence," Gomez said. "As long we have someone with us, we are fine."

When you've been in isolation for 40 days due to a coronavirus outbreak in your city, even simple things like taking out the trash can bring joy.

What's Next? Hopefully, a Hug

Gomez originally planned to remain in Yinchuan past the two-year mark to continue teaching at the English-immersion school she loves.

But the death toll of the virus coupled with the challenges of prolonged quarantine have made her appreciate family and home in Southern California even more.

She now plans to return when allowed. The question is when.

Chinese officials are not authorizing travel until at least a week passes with no new infections reported in her community. She hopes that will be soon.

As to what she anticipates the most after quarantine: comfort food like ice cream, but it’s not the first on the list.

NBC 7's Lauren Coronado spoke to a student who had to leave her Italy trip three months early.

The Spread of Coronavirus

The new virus, first detected in China, has infected more than 90,000 people globally and caused over 3,100 deaths. On Wednesday, health officials confirmed 11 people have died from coronavirus, known as COVID-19, in the U.S.

On Capitol Hill, lawmakers on Wednesday reached a bipartisan deal on a nearly $8 billion emergency bill to fund work on a virus vaccine and other measures, NBC News reported. The bill still needs to be voted on by the House and Senate before President Donald Trump could sign it.

The World Health Organization said about 3.4% of people infected with the virus COVID-19 globally have died, making it more fatal than the common flu. A study published last week in the New England Journal of Medicine assessing data from more than 30 Chinese provinces estimated the death rate was 1.4%.

Missing Attachment The Centers for Disease Control and Prevention recommends these seven tips to help prevent the spread of COVID-19.