The United States reported more than 205,000 coronavirus cases on Thursday, the most in a single day since the beginning of the pandemic, according to NBC News.

The new record follows another grim milestone -- more than 100,000 people were hospitalized with the virus on Wednesday as morgues and hospitals across the country risk being overwhelmed.

The head of the Centers for Disease Control and Prevention Dr. Robert Redfield warned the next few months of the COVID-19 pandemic will be among "the most difficult in the public health history of this nation" while signing off on a CDC panel's decision to vaccinate health workers and nursing homes first. The Pfizer vaccine could be approved by Dec. 10 or 11, Operation Warp Speed chief science adviser Moncef Slaoui said.

The U.S. has recorded more than 14 million coronavirus cases and 274,000 deaths during the pandemic, according to a tally by NBC News.

President-elect Joe Biden says he is keeping Dr. Anthony Fauci on as a chief medical adviser and a member of his COVID-19 advisory team.

Biden made the comments Thursday during an interview with CNN’s Jake Tapper. He said he spoke with Fauci earlier in the day about the need to instill confidence in any coronavirus vaccine and the fact that “you don’t have to close down the economy” to combat the virus.

Biden says he’d be “happy” to get a vaccine in public to prove its safety.

The president-elect said it was also his “inclination" that, on his inauguration, he would ask the public to wear masks for 100 days to help drive down the spread of the virus.

Fauci formally met with President-elect Joe Biden's transition team for the first time on Thursday to discuss the response to the coronavirus pandemic.

Fauci told NBC News he participated in a “very productive Zoom meeting," which lasted for an hour, with Biden’s team. Fauci said they discussed “a variety of Covid-related topics.” A senior transition official said Jeff Zients, who’s expected to be the incoming administration’s Covid-19 czar, led the discussion for the Biden team.

Fauci added that it will likely be the first of a series of transition meetings with him. He also said he fully expects to remain in his role as director of the National Institute of Allergy and Infectious Diseases as the new administration takes over.

The S&P 500 fell marginally from a record high in a late-day sell-off on Thursday after a report said Pfizer is dialing back its coronavirus vaccine rollout plan for this year due to supply chain issues.

Major averages cut gains quickly in the final hour of trading after Dow Jones reported Pfizer now expects to ship half of the doses it had previously planned this year after finding raw materials in early production that didn’t meet its standard.

But the sell-off was relatively mild as the report also said Pfizer and BioNtech are now on track to roll out 1.3 billion vaccines in 2021 and the 50 million dose shortfall this year will be covered as production ramps up. Shares of Pfizer dropped 1.7% following the news.

Still, the report raised concerns from investors that maybe the stock market’s recent run to records is pricing in a too-perfect rollout of Covid vaccines in the next 12 months.

Gov. Gavin Newsom on Thursday pulled the emergency brake even further in California, ordering regions with 15% or less capacity remaining in their hospital intensive care units to limit gatherings to outdoors for the next three weeks.

For the purpose of the new COVID-19 order, the governor said the state has been divided into five regions: Northern California, Bay Area, Greater Sacramento, San Joaquin Valley and Southern California.

California's quarantined governor was expected to announce new “drastic action” Thursday to combat the sudden surge in coronavirus cases, potentially issuing a new stay-at-home order for the state's nearly 40 million people amid fears that hospitals could be overwhelmed within weeks.

Newsom — who is staying at home after three of his children were exposed to the virus — already has imposed restrictions, including a nighttime curfew in 51 of the state’s 58 counties, an area with nearly the entire state population.

World War II veteran Major Wooten was released from the hospital on Monday after battling COVID-19.

The U.N. General Assembly president has opened the world body’s first special session on COVID-19 by calling it a historic and overdue moment of reckoning to forge a path to end the pandemic.

Volkan Bozkir said Thursday it must ensure people everywhere have access to vaccines and mobilize financial resources for economic recovery. He said the world is looking to the U.N. for leadership and action “to address the greatest challenge our world is facing today.”

Over 140 world leaders and ministers are scheduled to speak during the session that began with a silent tribute for the 1.5 million COVID-19 victims.

Moderna to Begin Testing Its Coronavirus Vaccine on Children

Massachusetts-based biotech firm Moderna is planning a clinical trial of its coronavirus vaccine with children ages 12 through 17, NBC Boston reports.

The study will include 3,000 children with half of the participants taking two doses of the vaccine over a four-week span and half of the group receiving placebo shots, according to its listing on clincaltrials.gov.

A timeline for when the trial will begin remains unclear, but Moderna’s CEO said he hopes it can be completed by the spring in order to receive FDA approval in time for the start of the 2021 school year.

Moderna announced Monday that early trial results show its COVID-19 is more than 94% effective and has applied to the Food and Drug Administration for emergency use authorization.

Most vaccine trials are generally tested on adults first to ensure safety before pediatric trials begin. As of late October, only Pfizer has included kids as young as 12 in its clinical trials.

Former Presidents Barack Obama, George W. Bush and Bill Clinton say they are willing to take the coronavirus vaccine in a public setting if it will help build confidence in the U.S. that the treatment is safe.

"I will be taking it, and I may take it on TV or have it filmed so people know that I trust this science,” Obama told SiriusXM’s “The Joe Madison Show” during an interview that is scheduled to air Thursday.

Bush aide Freddy Ford told NBC News that the 43rd president has offered "to do what he can to help encourage his fellow citizens to get vaccinated." And if deemed safe, after it's administered to the priority populations "Bush will get in line for his, and will gladly do so on camera."

"President Clinton will definitely take a vaccine as soon as available to him, based on the priorities determined by public health officials. And he will do it in a public setting if it will help urge all Americans to do the same,” Angel Ureña, a spokesman for Clinton, said in a statement to NBC News.

Their comments came as several polls find many Americans are skeptical about getting a government-approved COVID-19 vaccine, potentially jeopardizing U.S. vaccination efforts to control the pandemic. Their skepticism varies from fears about long-term side effects and concerns that President Donald Trump is pressing regulators to approve a vaccine before it is ready.

The United States on Thursday surpassed 14 million coronavirus cases nationwide, according to a tally by NBC News.

The United States reported the highest number of deaths in a day since the pandemic began in March.

On Wednesday alone, 2,777 people died of COVID-19 nationwide, according to NBC News.

'Cancel Everything,' LA Mayor Says as He Issues 'Safer at Home' Order

The order, which modifies an existing one, means the city rules now mirror restrictions put in place by Los Angeles County, the mayor's office said. Those, among other things, bar most gatherings with people from different households. People are urged to stay at home as much as possible.

"My message couldn't be simpler: It's time to hunker down," Mayor Eric Garcetti said. "It's time to cancel everything. And if it isn't essential, don't do it."

Wednesday saw the highest daily number yet of people hospitalized with COVID-19 in Los Angeles County, with 2,439, the county department of health said.

Should People Who Recovered From COVID Get Vaccinated?

Public health officials hope to vaccinate as many people as possible to turn the tide of the coronavirus pandemic once a vaccine becomes available — even those who have already recovered from COVID-19, NBC News reports.

And while it isn't yet known how the immune systems of COVID-19 survivors respond to a vaccine — particularly among coronavirus "long-haulers," whose symptoms linger weeks and months after their diagnoses — there is likely to be little risk in getting the shot.

"The general recommendation is to get the vaccine, even if you were previously infected," said Dr. David Thomas, a professor of medicine and director of the infectious diseases division at the Johns Hopkins University School of Medicine. "There are some nuanced questions that we don't have the answer to yet, but from what we know now, it's the right call to get the vaccine."

Several coronavirus vaccines are now in final stages for approval, but doctors are already worried that the public won't want to take them. Dr. Paul Biddinger, who sits on the Massachusetts governor's advisory group for COVID-19 vaccines, joined LX News to explain the many safety steps required for the vaccines to be approved for the general public and when to expect the first doses to be available. 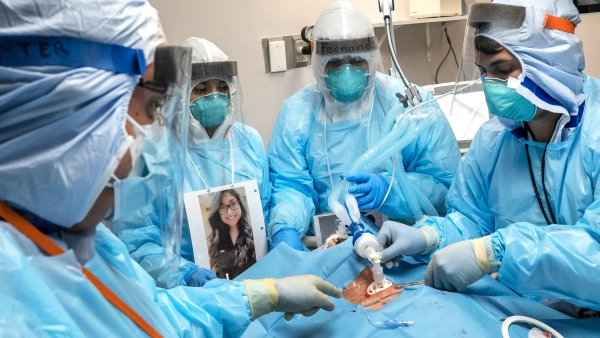 US Tops ‘Unfathomable' Milestone of 100,000 COVID Hospitalizations: ‘We're All on Edge' 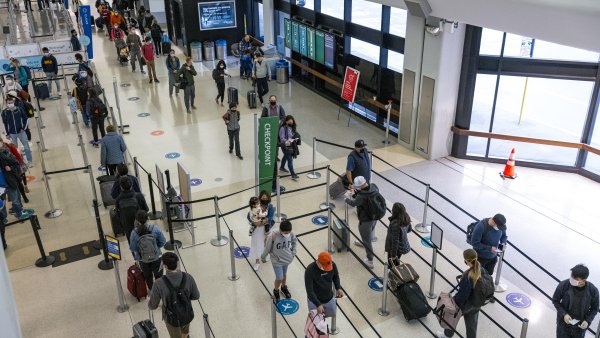 Couple Who Tested Positive for COVID-19 Arrested After Boarding Flight