The director brought a small urn containing some of his father's ashes to the ceremony, and he imprinted the bottom of the urn next to his footprints in the cement.

Actor-writer-director Kevin Smith and his longtime screen partner Jason Mewes sank their hands and feet in cement at the TCL Chinese Theatre in Hollywood today ahead of their latest film pairing as their characters Jay and Silent Bob.

Smith and Mewes first played the characters in Smith's 1994 film "Clerks," and they reprised their roles as comic foils in almost all of Smith's other movies -- taking the lead roles in 2001's "Jay And Silent Bob Strike Back."

Smith, who last year suffered a near-fatal heart attack, told the crowd gathered for the ceremony that he visited the Chinese Theatre forecourt 40 years ago with his family. 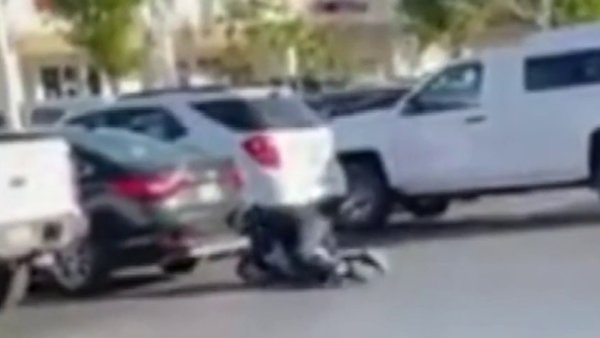 Smith brought a small urn containing some of his father's ashes to the ceremony, and he imprinted the bottom of the urn next to his footprints in the cement.

Mewes, who plays the outlandish and talkative Jay opposite Smith's mostly non-verbal Silent Bob character, called it "super surreal" to be honored at the famed theater.

"Kevin saw me -- 13-year-old kid handing around the community center -- and said, 'Wow, this kid has a weird sense of humor and says funny things,'" Mewes said. "And when he wrote his script 'Clerks,' he thought to write me in there."

Ben Affleck, who has appeared in multiple Smith films, including "Chasing Amy," "Dogma" and "Jersey Girl," spoke at the ceremony, which was also attended by actor Danny Trejo.