A pair of Black activists called on several Los Angeles officials Monday to withdraw their endorsements of Los Angeles County District Attorney Jackie Lacey in her bid for a third term.

"Lacey and her failure to protect us has demonstrated she is more concerned with protecting abusive and killer cops,'' a statement said. "Black lives don't matter to her, but what does matter to her is continuing to be the black face and tool of a justice system founded and steeped in white supremacy. Her tenure as District Attorney has been a complete disaster. Lacey has declined to prosecute several law enforcement officers involved in fatal shootings during her two terms in office.''

Ali, Hutchinson and representatives from the Coalition for Community Control of Police planned to hold a news conference at 11 this morning to publicly issue their endorsement rescission appeal -- part of an anti-Lacey effort that seems to be gaining strength. 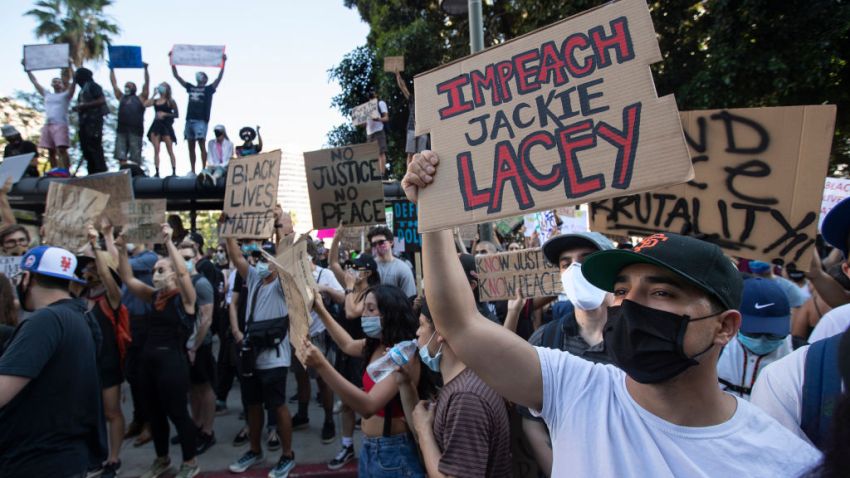 Over the weekend, Rep. Adam Schiff and Assemblywoman Laura Friedman withdrew their endorsements of Lacey.

"This is a rare time in our nation's history. We have a responsibility to make profound changes to end systemic racism & reform criminal justice. @LauraFriedman43 and I no longer feel our endorsement of Jackie Lacey a year ago has the same meaning. We have decided to withdraw it,'' Schiff, D-Burbank, tweeted Saturday morning.

Garcetti seemed to walk back his endorsement of Lacey last week, saying during an interview that "it may be'' time for a change in the District Attorney's Office.

In a response, Lacey said in a statement Saturday that "As the first African American woman to hold the L.A. County D.A.'s office, I am proud of my record of taking on systemic racism and reforming criminal justice -- from bail reform, to reducing juvenile cases by nearly 50%, to increasing our office's focus on mental health treatment instead of incarceration. I am singularly focused on doing the work of the people of L.A. County during this time of crisis.''

In November, Lacey will face former San Francisco District Attorney George Gascon, who is regarded as a progressive prosecutor.

About 90 minutes after Schiff's tweet, Democratic Sen. Elizabeth Warren of Massachusetts tweeted her endorsement of Gascon.

"(Gascon) has been a national leader in criminal justice reform and a powerful advocate for rethinking our approach to public safety and ending mass incarceration,'' Warren tweeted.

About 100 protesters descended on a park near Lacey's Granada Hills home Saturday to demand she charge the Los Angeles Police Department officers who fatally shot Alex Flores Jr. on Nov. 19 and Daniel Hernandez Bravo on April 30. Family members of both men led the protests, calling for her to be voted out of office.

Lacey has declined to prosecute several law enforcement officers involved in fatal shootings during her two terms in office.

Since being elected in 2012, Lacey's office has never charged a police officer with misconduct for an on-duty shooting, despite repeated appeals for her to do so. Her office, however, did charge Sheriff's Deputy Luke Liu in the Feb. 24, 2016, shooting death of Francisco Garcia.

Legal scholars say the law is heavily weighted in favor of officers who justify their actions by saying they reasonably perceived a threat to themselves or others when they opened fire -- even if that belief was mistaken.

Lacey supporters say she has been prudent in determining whether she would win at trial, avoiding the humiliation of losing high-profile cases.

Update: This article has been updated to add that Jackie Lacey's office charged a sheriff's deputy with voluntary manslaughter in 2019.