A California Highway Patrol cruiser approached the protesters, and one demonstrator opened the cruiser's passenger door. The person closed the door and the cruiser sped away, but another demonstrator chased after it.

Demonstrators in support of Armenia in its conflict with Azerbaijan and Turkey blocked traffic in various locations in the San Fernando Valley Tuesday night, including all lanes of the Ventura (134) Freeway in Burbank and Toluca Lake.

Vehicles, some decorated with Armenian flags, lined up and stopped all traffic on the freeway near Buena Vista Street in Burbank after 8 p.m.

A California Highway Patrol cruiser approached the protesters, and one demonstrator opened the cruiser's passenger door. The person closed the door and the cruiser sped away, but another demonstrator chased after it.

Traffic resumed at Buena Vista Street by 8:50 p.m., but vehicles on the freeway were blocked again near Cahuenga Boulevard in the Toluca Lake area shortly after.

Another batch of protesters waving Armenian flags blocked the intersection of Laurel Canyon and Ventura boulevards in Studio City about 9:30 p.m.

Los Angeles County is home to the nation's largest population of Armenian immigrants, and multiple demonstrations have taken place in recent weeks against what many of them call Azerbaijan's aggression against Armenia and Nagorno-Karaabakh, also known as Artsakh.

The mountainous region is controlled by ethnic Armenians but is inside Azerbaijani territory.

Armenia and Azerbaijan have been engaged in conflicts for years, but the situation escalated in July when Azerbaijan threatened to blow up a nuclear power plant in Armenia. 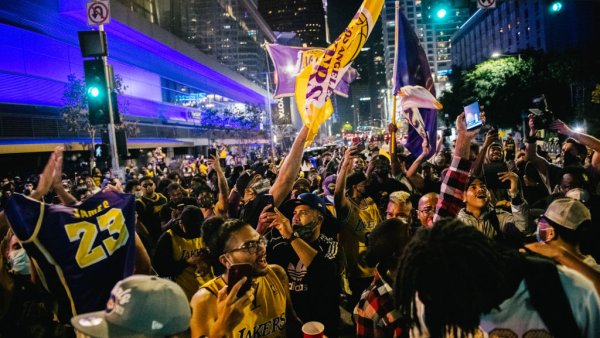 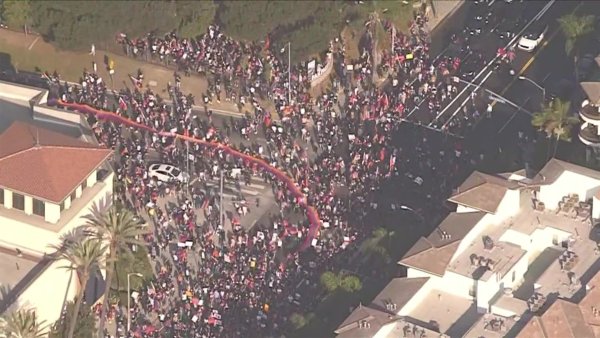 Estimated 100,000 March in Support of Armenia in Conflict With Azerbaijan and Turkey

Los Angeles City Councilman Paul Krekorian introduced a resolution Oct. 1 that was immediately passed by the City Council condemning the actions of the Azeri government.

Krekorian is of Armenian descent.

A statement from Azerbaijan's Ministry of Defense accused Armenia of violating a temporary ceasefire brokered by Russia this weekend. Azerbaijani authorities said four women were among at least nine people killed when a residential building compound was hit during an Armenian bombardment of Ganja, Azerbaijan's second-largest city.

A group of apparent pro-Armenia protesters, some carrying flags, temporarily halted traffic on the 134 Freeway on Tuesday, Oct. 13, 2020.

In addition to the ongoing pro-Armenian protests in Los Angeles, the Armenian community has been on the street raising millions of dollars to send back to Armenia and Artsakh as humanitarian aid, according to Maria Mehranian, president of the Glendale-based Armenian Fund. The money includes a $1 million donation to the fund by reality television personality Kim Kardashian West.