In February the I-Team questioned the head of Caltrans for the LA area about why his agency let trash on the freeways get so bad.

State clean up crews are now working overtime to remove the increasing tons of rat-infested trash that's been piling up on Southern California's freeways.

The move comes after the NBC4 I-Team questioned Caltrans officials. Sections of the 101, 170, and 10 freeways that the I-Team documented were literally covered with trash a month or two ago, are now they are nearly spotless.

"The I-Team put pressure on [Caltrans]. You said you were going to do another story, and the next day, wow, they’re out here cleaning all of a sudden," said Cam Grossman, who owns an historic duplex with a view of the trash covered 101 Freeway offramp at Highland Boulevard. 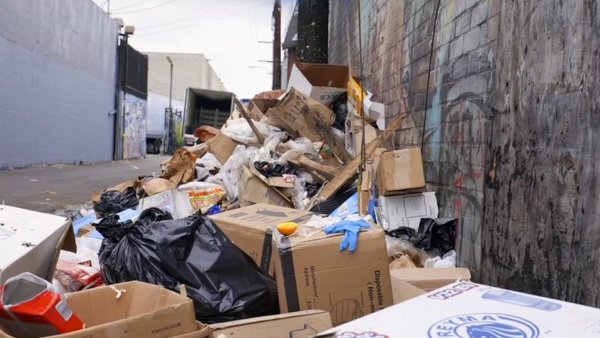 "Ask anybody on any street in this city—would they want that trash across the street from them? The answer is no," Grossman told NBC4.

It was a year ago that the I-Team began documenting segments of the freeway system, and saw the garbage getting worse and worse in many areas, like on the northbound 101 Freeway offramp at Sunset Boulevard.

In February, the I-Team questioned the head of Caltrans for the LA area, Tony Tavares, about why his agency let trash on the freeways get so bad.

"I'll be honest, I think we can do a better job," Tavares told the I-Team.

He blamed the growing heaps of freeway trash on the pandemic, saying it had made trash pickup efforts more difficult.

But the I-Team obtained records showing that some of the trashiest parts of the freeways, like the 10 near LA's Fashion District, hadn't had a clean up since early 2018 -- two years before the pandemic.

In response to the I-Team's questioning in February, Caltrans' Tavares said he was putting clean up crews on overtime to get a handle on the backlog of trash on the freeways.

The I-Team has now documented numerous spots that were recently covered with garbage but are now relatively clean.

The 101/Highland offramp across from Cam Grossman's duplex is a case in point.

The news comes after the NBC4 I-Team reported that CalTrans hadn't cleaned some stretches in years. Joel Grover reports for the NBC4 News on Thursday, April 29, 2021.

On Monday, the I-Team questioned Caltrans about the filthy conditions. Just two days later they sent a crew to the offramp, and now most of the trash has been cleaned up.

Cam Grossman is hoping Caltrans will now do regular clean ups on dirty sections of the freeways, like the offramp across from his duplex.

"I'm sure that in a month, they don't want the I-Team back here," Grossman said.