The 60/91/215 interchange in Riverside will be partially shut down this Friday night and through the weekend to facilitate work on a resurfacing project intended to improve travel between Riverside and Chino.

According to Caltrans, starting at 8 p.m. and continuing until 5 a.m. Monday, the connector bridge between the eastbound Pomona (60) Freeway and northbound Interstate 215, along with the bridge connecting the eastbound Riverside (91) Freeway and the westbound 60, will be out of service.

Crews will use the 55-hour shutdown to make modifications to the ramps, according to officials.

Detours will be in place, but motorists should anticipate lengthy delays at the heavily used interchange, according to Caltrans.

The work is part of what the agency dubbed the "60 Swarm."

Every night this week, as part of the swarm, contractors have been working on both the east- and westbound sides of the 60, between Interstate 15 and the 60/91/215, requiring multiple lane closures between 9 p.m. and 5 a.m. The work has resulted in traffic backups spanning several miles, even in the middle of the night.

From late July to mid-November, Caltrans completely closed either the eastbound or westbound 60 on weekends to facilitate work.

Officials said the rehabilitation project, which entails replacing slabs of degraded pavement, moved twice as fast because of the closures. Altogether, the swarm covers a 20-mile stretch, from downtown Riverside to the west end of Chino.

The other part of the 60 Swarm is comprised of bridge replacements, costing $23 million. According to Caltrans, the Benson Avenue, Monte Vista Avenue and Pipeline Avenue overcrossings in Chino are all set to be razed and replaced with new spans. Alternating east- and westbound lane closures for the bridge work started in July.

Officials said the current bridges were constructed with dimensions that make them prone to being bumped by oversized truck loads. Over the years, the repeated minor hits have had a cumulative impact, requiring the two lane bridges to be replaced. 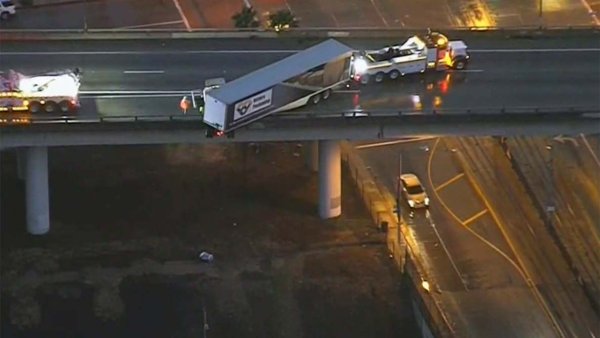