Long Beach also enacted a $4 hazard pay ordinance, which was challenged in court. Kroger announced last month that it would close two of its Long Beach stores -- a Ralphs location and a Food4Less store -- in response to the ordinance.

The Los Angeles City Council finalized an emergency ordinance Wednesday to require large grocery and pharmacy retailers to offer employees an additional $5 per hour in hazard pay amid the COVID-19 pandemic.

Council members last week approved the ordinance on a 14-1 vote -- but a unanimous vote was needed for passage on first reading. During the second reading, a dozen yes votes were required for approval and the measure was again approved 14-1, with Councilman John Lee reaffirming his dissent. 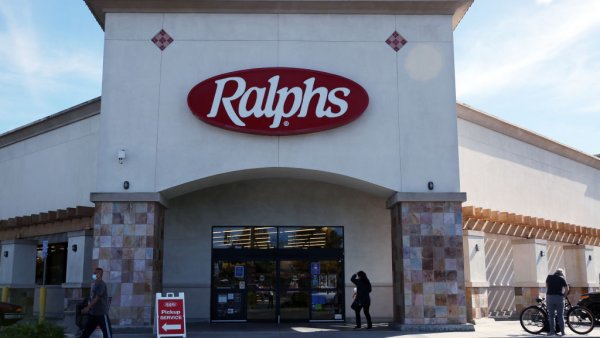 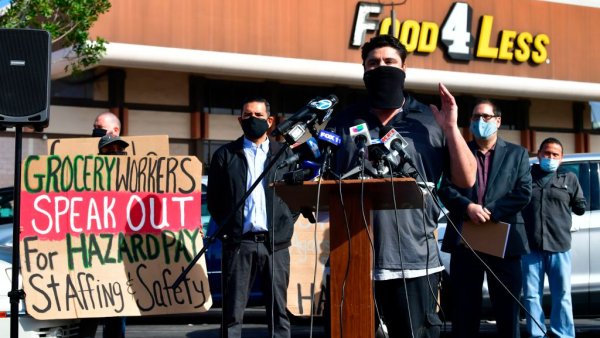 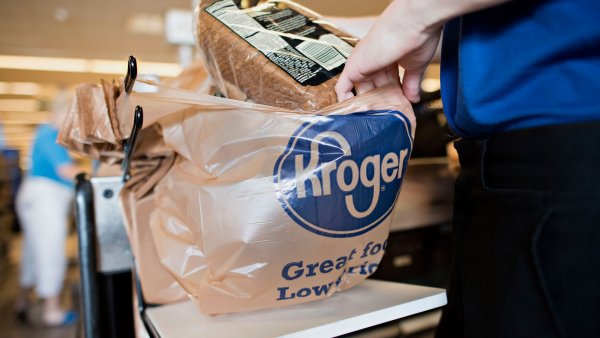 Kroger Giving $100 to Workers Who Get COVID-19 Vaccine

The hazard pay will be given in addition to employees' base wages for the next 120 days. According to a report by Los Angeles' chief legislative analyst, which cited ZipRecruiter, the average grocery store worker in Los Angeles earns $17.51 an hour.

"Fair compensation is the very least that our grocery store workers deserve after all they have done for us,'' Council President Nury Martinez, who introduced the original motion with Councilman Mitch O'Farrell, said during the council's discussion of the ordinance last week.

"Cashiers, stockers, baggers and so many more have risked their lives every day since March making minimum wage to make sure we have everything we need to stay safely at home to get through this crisis,'' she said. "While these companies have seen massive profits, it has not trickled down to their employees. These companies can afford to pay the hazard pay, they just don't want to.''

All through March, SoCal businesses are participating in an important fundraiser. Toni Guinyard reports for Today in LA on Wednesday March 3, 2021.

During Mayor Eric Garcetti's COVID-19 briefing last week, he affirmed his support for the ordinance.

"I absolutely 100% support the hero pay for our grocery workers, and with any good conscience, it shouldn't raise food prices because grocery stores are one area that have record profits, more money than they've had before,'' Garcetti said. "I hope they will see this and maybe be inspired by it instead of being threatened by it.''

The Los Angeles County Board of Supervisors adopted an urgency ordinance on Feb. 23 to require $5 additional pay for national grocery and drug retail employers in unincorporated areas of the county.

Long Beach also enacted a $4 hazard pay ordinance, which was challenged in court. Kroger announced last month that it would close two of its Long Beach stores -- a Ralphs location and a Food4Less store -- in response to the ordinance.

The California Grocers Association filed federal lawsuits against Long Beach, West Hollywood and Montebello, seeking to declare hazard pay mandated by those cities as invalid and unconstitutional, contending that grocers will not be able to absorb the additional pay without raising prices, closing stores, reducing hours or laying off employees. A federal judge denied the association's bid to temporarily overturn the Long Beach ordinance.

Los Angeles' CLA determined that potential economic impacts of the ordinance include temporary increases of labor costs as a percentage of the company's sales, potential higher prices for consumers, potentially delayed store openings, renovations and wage increases or promotions for employees, potential pressure on struggling stores that could lead to stores closing and reduced hours for some employees.

However, the CLA also determined that the higher wages could also benefit other city businesses, as more people would have extra money to buy additional goods. It could also help people pay down their debts and increase their savings.

"As the CLA report makes clear, this ordinance comes with trade-offs for both retailers and employees, pros and cons with anything we do, but it should be appreciated that this effort is a temporary measure that increases wages of our grocery and retail workers,'' Councilman Mark Ridley-Thomas said before the measure's first reading. "I want to underscore that it is a matter of justice.''

O'Farrell agreed, saying, "Grocery store workers continue to show up every day, serving customers and providing the essentials that residents across the city need to stay safer at home. Their greater risk of exposure to COVID-19 is by definition hazardous work, and the money they earn should be commensurate with those risks associated on the job.''

Councilman Curren Price said the CLA report "found that the mortality rate for Latino workers in food and agriculture has gone up by 59% because of this pandemic and for Black workers in retail at 36%. Those are not small numbers. Providing these workers with $5 hazard pay for the next 120 days is the least we can do.''

"We applaud the Los Angeles City Council members for doing the right thing and recognize the sacrifices our members do everyday to serve their communities during a prolonged global pandemic. It's unconscionable to see how grocery corporations have doubled their profits during the pandemic -- with Ralphs and Albertsons alone raking in $6.8 billion in profits -- while they still refuse to compensate the front-line workers making this windfall possible,'' Grant said.

UFCW Local 770 also distributed a statement from Celeste Ruiz, an employee of a Los Angeles Food 4 Less who tested positive for COVID-19 in January.

"Unfortunately, all my family came down with the virus. As essential workers we are still dealing with health and safety issues in the stores,'' she said.

"Employers can clearly afford a temporary premium. These chains crying poverty after a year of increased profit is hard to stomach. They have gotten away for too long without listening to us. Workers need hazard pay and if corporations keep ignoring us, we are grateful elected officials are listening.''

Lee, the lone dissenter, said he hoped the council could come up with a different solution than what he called "a gross overreach of government into business and what they should be paying their employees.