Could It Happen in LA? Voters in This City Force Politicians to Move Homeless Off the Streets

Proposition B, which is now being enforced in Austin, bans all outdoor camping in the city.

Homeless encampments had sprung up under freeway overpasses, next to schools, and in public parks. It sounds like Los Angeles, but these are scenes from Austin, Texas—a city whose voters identify mostly as Democrats and progressives, just like in LA.

Now, those same voters have forced their politicians to ban camping in all public spaces—an idea the Los Angeles city council recently decided was too extreme.

“I grew up poor. I’m a registered Democrat,” said Cleo Petricek who co-founded a group called Save Austin Now, which collected enough signatures to put Proposition B on the ballot in Austin last May and it passed with 57% of the vote.

Petricek told the I-Team that she started Save Austin Now two years ago when Austin’s Democratic mayor and city council stopped enforcing the city’s ban on outdoor camping, and the number of tents on the streets doubled.

“And like that, we had tents popping up everywhere,” Petricek told NBC4.

Proposition B, which is now being enforced in Austin, bans all outdoor camping in the city. 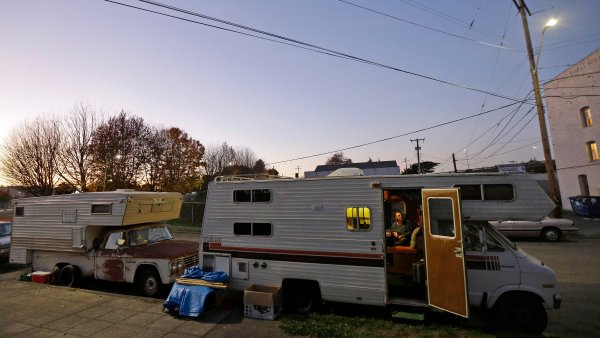 Petricek says the ban will force elected officials to find shelter and housing for the thousands of unhoused Austin residents currently sleeping in outdoor public spaces.

"Let’s set up safe campgrounds for them, where there’s security and access to water and toilets to restore their dignity,” said Petricek.

Proposition B was opposed by Austin’s mayor, Steve Adler, who spoke with the I-Team, saying he understands the frustration of Austin voters.

"They sent a very clear message that they don’t want to have people camping in our city,” said Mayor Adler.

The City of Austin is now clearing out encampments and moving people into shelters, including hotels and converted parking lots, in order to comply with the will of the voters. The ordinance even allows Austin Police to arrest those who refuse to move.

Advocates for the homeless in Austin say the new law criminalizes homelessness and targets the most vulnerable in their community. They also point out that Austin currently doesn’t have enough shelter and temporary housing for those who need it.

Trisha English is one the more than three thousand people experiencing homelessness in Austin and is concerned about how she and her friends will comply with the new ordinance.

“I want to know the reality of what’s going to happen to my brothers and sisters out here on the streets,” said English.

What’s happening in Austin is being closely watched by many here in Los Angeles. In June, City Councilmember Joe Buscaino proposed a similar, total ban on outdoor camping, but the City Council voted against it.

Instead, the Council instituted a partial ban on encampments, only in certain areas such as near parks and schools. The new rule will also often require the City Council to take a vote each time the ordinance is enforced, raising questions by some about the law’s power to create real change.

Some LA residents, who live near encampments, say it's time to let the voters weigh in on a total ban on public camping.

"I think that is a fabulous idea because I feel like the people want to solve this problem,” Heidi Roberts told the I-Team.

Roberts co-founded a group called Haaven, which provides shared housing for the homeless.

“The politicians just don’t have the will to solve the problem," says Roberts.

When Jimmy, a homeless man on the streets for years, saw the opportunity to live in a limo, he used what little money he had to buy it. For him, it's better than the tent he used to call home. John Cádiz Klemack reports for NBC4 on Monday, June 21, 2021.

Others point out that past attempts in Los Angeles to compel the unhoused off the streets were either blocked in court or by financial obstacles.

"All we see is the problem getting worse," says Joel Bellman, who worked for various LA County Supervisors on the homelessness issue for 20 years.

" I just don't see how we could ever develop the capacity to house everybody who is on the streets now," Bellman told NBC4.

But Austin, Texas officials are now being forced by the voters, and by Proposition B, to find ways to house everyone. It’s a message some say the voters in Los Angeles should also get the opportunity to send to officials here.

“[Elected leaders] have spent billions and billions of dollars and nothing has changed,” said homeless advocate Heidi Roberts.

“So the voters, at this point, need to hold their feet to the fire and make them accountable, to create the change that’s needed," Roberts added.