After 13 Years in Prison, Man Found Innocent of Crime Freed

A Los Angeles man who served 13 years of a 27-years-to-life prison sentence for a crime a judge and the California Innocence Project said he didn’t commit was released from custody on Tuesday.

Daniel Larsen (pictured below) was convicted in 1999 of possession of a concealed weapon after two police officers testified they saw him toss a knife under a car in the parking lot of a bar, according to the California Innocence Project, a legal aid organization that works to revisit convictions of people believed to be innocent of their crimes.

Larsen was sentenced to 27 years to life in prison under California’s Three Strikes Law because he had prior convictions for burglary.

The 45-year-old walked out of court a free man accompanied by his lawyer and the woman he married in September. He said little to reporters standing by after a federal judge ordered him released.

"To see Danny walk out of prison is one of the great moments in our work," said Jan Stiglitz, the co-director of the Innocence Project. "It's been a long time and it feels terrific."

The order for Larsen's release came while appeals in his case are pending.

During his trial, Larsen’s now disbarred attorney did not call a single witness to the stand, including up to nine who could testify that they saw someone else — not Larsen — throw the knife, the Innocence Project said.

His conviction was overturned in 2009 when a federal judge ruled that his constitutional rights had been violated.

The court found that Larsen had shown he was "actually innocent," that the police officers at Larsen’s trial were not credible, and that his trial attorney was constitutionally ineffective for failing to call witnesses on his behalf. 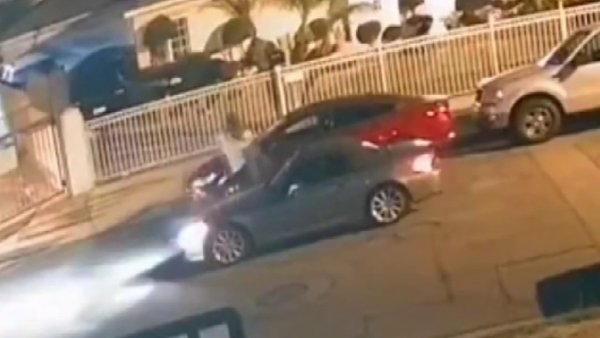 But before he was released, California Attorney General Kamala Harris is challenging Larsen's release, saying he hadn't presented proof that he was innocent quickly enough, the Innocence Project said.