Gov. Newsom Declares State of Emergency in LA on Fourth Day of Protests

Los Angeles and other neighboring cities are under a curfew through Sunday morning as the protests continued.

Los Angeles police officers in tactical gear and protesters clashed Saturday afternoon near Fairfax Avenue and 3rd Street in the Fairfax District. Several police vehicles were set on fire, sending plumes of black smoke over the area. Messages were written in spray paint on police cars, at least two of which had windows smashed out.

By 9 p.m., an hour after the curfew went into effect, people could be seen looting from stores on Melrose Avenue, and firefighters were battling a fire that was consuming several stores.

At a Saturday news conference, Mayor Eric Garcetti had planned to discuss Friday night’s protest and violence. Instead, he pleaded for peace.

"Whether you wear a badge or whether you hold a sign, I’m asking all of Los Angeles to take a deep breath and step back for a moment," Garcetti said. "To allow our firefighters to put out the flames. To allow our peace officers to re-establish some order. And, to let them protect your rights to be out there."

Garcetti announced a curfew that will be in effect in Downtown Los Angeles beginning from 8 p.m. Saturday to 5:30 a.m. Sunday. Later in the evening, the mayor told NBCLA that the curfew had been expanded to the entire city of Los Angeles. An alert was sent to phones across the city shortly after 7 p.m.

In addition, Garcetti said he asked the governor for National Guard assistance, with up to 1,000 troops expected to arrive in the LA-area by midnight.

LA County Sheriff Alex Villanueva also said he had requested "limited activation" of the National Guard and asked for the extra resources to be put on standby.

West Hollywood Mayor Lindsey Horvath also announced a curfew will also be in place in her city starting at 8 p.m. A short time later, the city of Beverly Hills said that a curfew would be in place from 8 p.m. Saturday to 5:30 a.m. Sunday to ensure the safety of residents, visitors and law enforcement. The city of Santa Monica also announced that it would be under curfews from 8 p.m. until 5:30 a.m.

Pasadena and Culver City also announced curfews to match what was happening in nearby Southern California cities.

Squad cars are set on fire during protests in the Fairfax District. As seen on the NBC4 News on Saturday, May 30, 2020.

Several rallies were planned across the city Saturday, with Black Lives Matter Los Angeles and BLD PWR scheduling a rally at noon at Pan Pacific Park, 7600 Beverly Blvd., to call for an end to police brutality against unarmed black Americans and justice in the death of George Floyd. The Fairfax District, where the aforementioned rally was planned, featured significant unrest and several police cars vandalized and and set on fire, resulting in a large police response.

As police and protesters clased, police announced the protests in the Fairfax District as an unlawful assembly.

The protests erupted Saturday as Los Angeles County reported the largest single day total of coronavirus cases since the pandemic began, confirming another 2,112 cases of COVID-19 and 48 additional deaths.

"We do need to make sure these protests do not become places that are super-spreader events," Garcetti said. "It is not a reason to not protest. We want to find peaceful ways for people to do that."

Garcetti was joined at the afternoon news conference by the Rev. Najuma Smith-Pollard, daughter of the Rev. Cecil L. Murray and program manager for the Community Engagement program named after her father at USC. She remembered the civil unrest that followed the 1992 acquittal of four LAPD officers in the Rodney King beating and her father’s powerful words that comforted the city.

Garcetti also announced that all COVID-19 sites were closed at 3 p.m. as a result of the unrest.

The marches and protests were part of several cross the United States against police brutality following the in-custody death of George Floyd in Minneapolis on Monday.

Saturday was the fourth straight day of protests in Los Angeles over police brutality targeting African Americans. Businesses were looted, freeways and streets were shut down and the protests have turned violent.

Five hundred and thirty-three people were arrested Friday during the protest, Los Angeles police said. The individuals were arrested on suspicion of burglary, looting, probation violation, battery on a police officer, attempted murder and failure to disperse, the LAPD said Saturday in a news release. All but 18 of those arrested were released on their own recognizance.

"While more protests are slated for various locations throughout the city today, we remain hopeful those demonstrations will be peaceful," the department said in its new release. "The Department will be deploying additional resources to maintain order and ensure the safety and security of not only individuals exercising their first amendment rights, but also the residents and businesses in our community."

LAPD said that six officers were injured during the protests on Friday night and Saturday morning. None of the injuries were life-threatening.

People are protesting to demand justice for Floyd, who died Monday after being handcuffed and pinned to the ground by a white Minneapolis Police Department officer, Derek Chauvin. Chauvin pressed his knee on the 46-year-old man's neck for several minutes while three other officers looked on.

Video footage of the arrest, in which Floyd is heard saying "I can't breathe," spread widely online, and all four officers were fired.

Police Chief Michel Moore appealed for calm ahead of the protests on Saturday in a tweet saying, "Last night was a dark reminder of the perils of a society in turmoil and how our people stand to support peaceful expression while being ready to protect the rights of all." 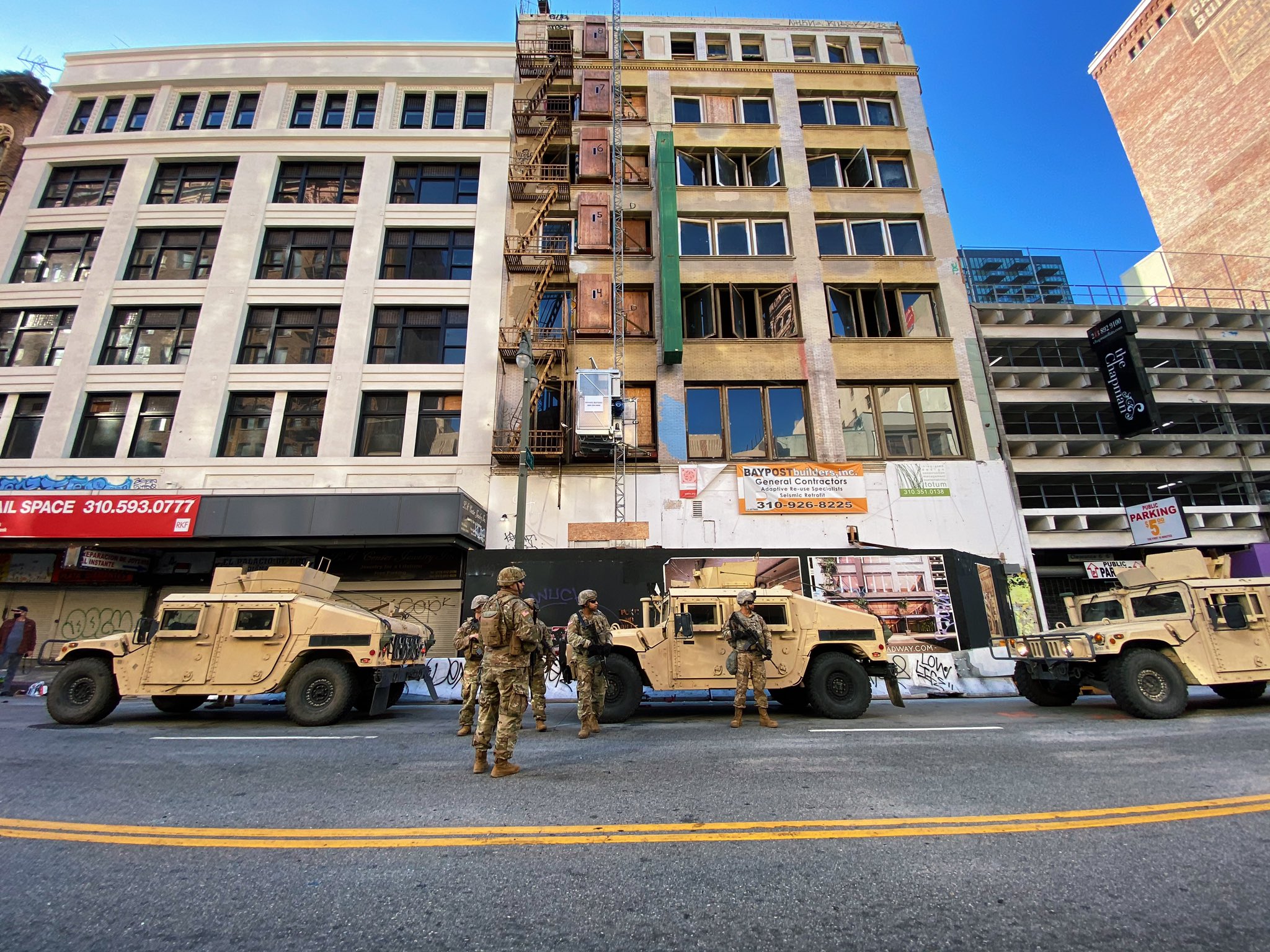 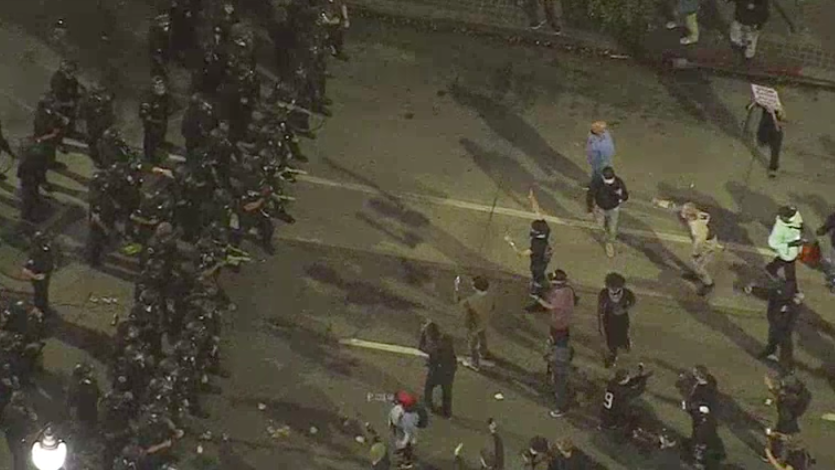