Driver in Fatal Anaheim Apartment Crash Not Under the Influence, CHP Says

Good Samaritans in the apartment building attempted to help the shocked driver after the crash, which the California Highway Patrol said was likely caused by either medical or mechanical issues.

Officials with the California Highway Patrol say they now believe the cause of Tuesday afternoon's fatal crash, involving a dump truck that veered off a freeway ramp and into an Anaheim apartment building, was either medical or mechanical.

The truck's driver, identified by the CHP as 54-year-old Rafael Pacheco, was not under the influence of alcohol or drugs when the crash occurred, the CHP said.

"He was in shock," Joshua Jones, a witness to the crash and resident of one of the apartments involved, said of the truck driver after the incident. "He was just sitting there blinking, [he] had blood running down his face."

Jones says it was pure adrenaline that led him to run through piles of debris to the rescue of the driver, who lost control of the truck and hit a car stopped at the bottom of the 57 Freeway ramp at Lincoln Avenue.

"I was just trying to get him to look at me and say something, you know?" Jones said. He and other neighbors in the building pulled the driver to safety, and the driver was alert and talking before paramedics took him away.

The truck kept going after veering off the freeway, hitting two other cars, plowing through a carport and two Corsican Apartment buildings before landing in a resident's bedroom.

"It was really bad," said apartment resident Zuhdit Mino. "I heard the three hits, it hit one wall, the second and the last... it was very loud. It shook the apartments as well."

That resident, who the CHP identified as 61-year-old Rory Antoine, died in the crash.

Police say Antoine was struck and killed, and carried with such force that it was unclear where his living room started and ended.

"We were trying to determine if that individual was in the second building or first building," said CHP officer Florentino Olivera. "But after our investigation it was determined he came from the first building."

Edgar Lua and his girlfriend were in one of the cars also hit by the Fullerton paving company truck.

"It was a big impact, it pushed us a little bit to the side, we almost lost control," Lua recalled. 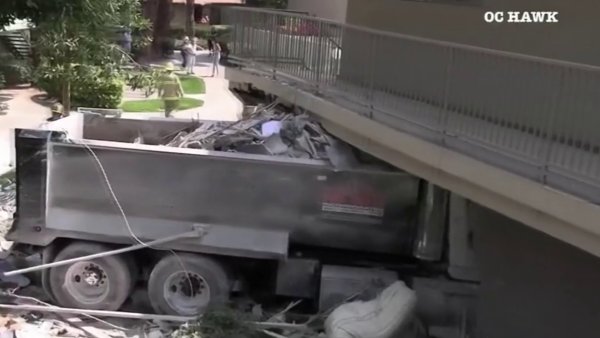 One Person Killed When Dump Truck Barrels Through Apartment Building

Dozens of apartment residents were displaced Tuesday night by the crash. The Red Cross was at the scene, helping place some of the families in nearby hotels.

Patricia Johnson, a resident who was formerly homeless, is without a home once again. But she was just grateful to have her dog, Ears, with her.

"I'm still shaking inside," Johnson said. "But to have Ears and me together again? That's what's important."