His family told NBC4 that the 18-year-old victim was not in a gang and did not have any enemies.

The teenage father of a 3-week-old baby was gunned down early Sunday while walking home from work, and police are searching for the killer.

Malcolm Mency, 18, was fatally shot in the back as he walked in the 2000 block of Broderick Avenue in Duarte, according to the Los Angeles County Sheriff’s Department. The report of a person down came in about 12:30 a.m.

Mency was taken to a hospital where he pronounced dead, authorities said.

The new father was walking home from his job at a Sonic Drive-In, a fast-food restaurant chain. He was wearing his uniform when he was killed.

His family told NBC4 that Mency was not in a gang and did not have any enemies. They said he graduated high school two years early, was working two jobs and planned to go to college and enter the medical field.

The day before he was killed, Mency spent time with his mother, laughing and playing with his newborn son. 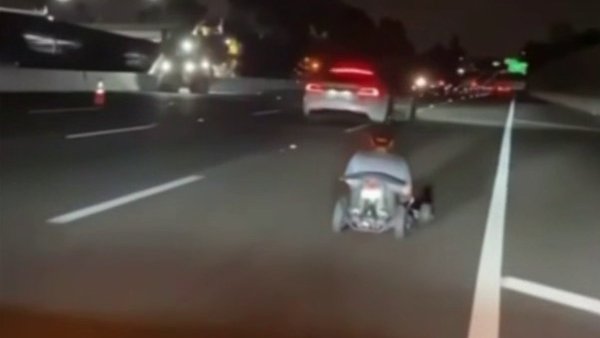 ‘Dangerous, Stupid and Illegal': CHP Pulls Over Go-Kart for Stunt on LA's 101 Freeway

Mency's family and friends have created a fundraiser to help the 18-year-old's mother with her son's funeral costs. To donate, click here.

A description of the shooter was not immediately available. Neighbors, family and friends speculated that the crime may have been racially motivated, saying that black men walking alone at night are being targeted by other minority gangs for no other reason than the color of their skin.

Hours after Mency was killed, another man was shot in Duarte just a few blocks away. In that case, the victim was struck with gunfire in the lower back in the 2300 block of Bloomfield Street.

He was transported to a hospital with what was believed to be non-life threatening injuries, according to the Los Angeles County Sheriff's Department.

Authorities were investigating late Sunday whether the two shootings were related.

Anyone with information in either case is urged to call the LA County Sheriff's Department's Homicide Bureau at 323-890-5500. Anonymous tips can be reported to Crime Stoppers by calling 800-222-TIPS (8477), by texting the letters TIPLA and the information to CRIMES (274637), or by using the website http://lacrimestoppers.org.