There are now more than a thousand illegal marijuana grows in San Bernardino County alone, the majority in the high desert.

Eradicating them is a time consuming effort.

The NBC4 I-Team followed the county marijuana enforcement team on a recent series of busts.

If brought to maturity each plant would be worth about $1,000 and there were about a hundred in one greenhouse NBC4 saw.

More Than 373,000 Plants and $1 Billion Worth of Marijuana Seized in SoCal Desert 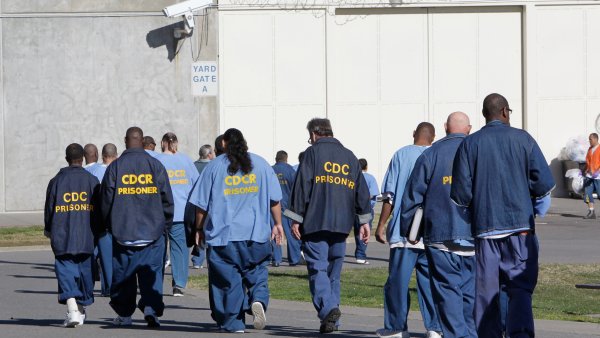 California Inmates Can't Have Marijuana in Prison After All, Judge Rules

On this day's sweep, the only person NBC4 encountered was a man, sitting in this vehicle when deputies arrived, with more than a ton of water loaded on the trailer, well over the vehicle's weight restrictions.

"I was just working," he said in Spanish.

Deputies cited and released him, but tending an illegal grow is just a misdemeanor, with a fine of only $500.

The CHP can't do anything either, since he wasn't driving.

NBC4 caught up with Officer Kuhlmann after he pulled over a vehicle hauling water near Victorville.

"The majority of people that I have stopped driving these vehicles have either not been licensed at all or do not have the proper license to drive," said Kuhlmann.

Trucking in water is one way to feeds these illegal grows in the desert.

From the air, NBC4 spotted the drilling of illegal wells, putting the already limited desert water supply in danger.

"We've had people say that they had to drill an additional 70 feet on their well just to try to hit water again because the water levels have dropped so far," said Sgt. Rich Debevec with the San Bernardino County Marijuana Enforcement Team.

Add to that the dangerous chemicals used at these illegal grows. From pesticides like methamidophos to the neurtoxic chemcial carbofuron.

'Because it was found on top of the water container, we're assuming that they were actually pouring chemicals into the water and then feeding into the plants," said Debevec. "It's deadly enough that we're going to cut the plants in place and we're just going to leave them."

Also left behind at these sites -- the hoop houses, irrigation supplies, abandoned trailers and more.

"Taking someone's legal entity that's on their property whether that is a tarp or PVC piping or anything that's used to construct what we call hoop houses, those are legal goods," said Supervisor Dawn Rowe, who represents the High Desert of San Bernardino County. "We've been sued for destroying people's private property that wasn't illegal."

Code enforcement officers are understandably wary concerned about approaching these properties, but that's upsetting to neighbors like Amy Tessier and her family in Twentynine Palms.

"So if it's unsafe for a code enforcement officer, a grown adult to come to my neighborhood, how am I supposed to raise four children in a neighborhood that has pit bulls running free, criminals growing illegal marijuana and all the elements that go with that?" Tessier said.

Rowe said they are working to tackle that part of the problem by pairing up more code enforcement with more sheriff's deputies.

Lt. Marc Bracco said the outdoor grows have likely doubled in the last year. The work to eradicate these grows is nonstop.

"It's one of the hardest working teams in our narcotics division," said Lt. Bracco.

Neighbors are grateful for the work of the marijuana enforcement team but frustrated that illegal operations keep reappearing.
"There was a third raid on this one parcel, different owners, different pot farmers," said Jeff Taylor.

It's a clear sign of the challenges facing law enforcement as they chip away at the problem, Illegal sites reappear and multiply.