A wind-driven wildfire that threatened homes near Banning in Riverside County that forced evacuations and destroyed at least one home continued to grow Wednesday evening, scorching nearly 3,000 acres.

The massive blaze, dubbed the Summit Fire, was at 30 percent containment as of 7:30 p.m. The fire was 35 percent contained by 9 p.m. and had a "slow rate of spread," according to Riverside County Fire Department's online incident report. 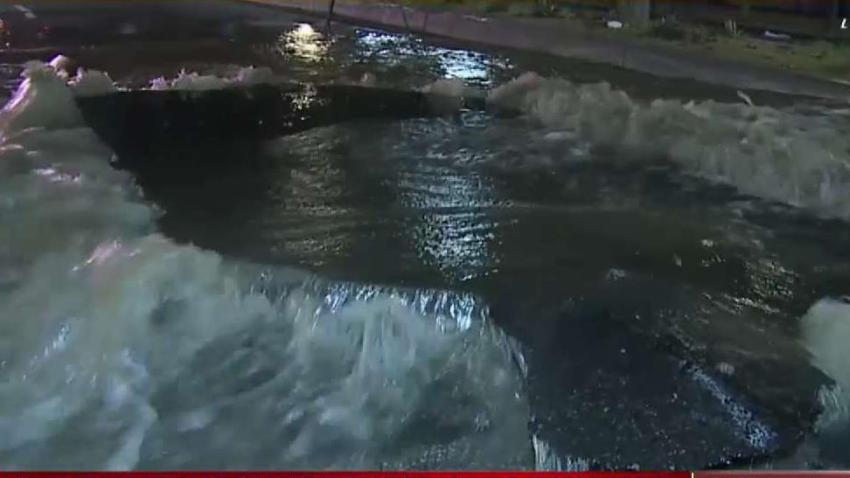 At least one home burned on Mesa Street at Sunset Avenue (map), and about 700 people had been evacuated and moved to aid centers. All evacuations were lifted by 8 p.m., according to Riverside County Fire officials.

Hawkins said crews from outside Riverside County were called to battle the blaze in the rolling foothills and canyons.

"We are bringing in everything we can to get a hold on this fire," he said, adding that the area had very difficult access.

Hawkins said there are two "heads" to the fire: one north of Banning that is heading west toward an area north of the neighboring city of Beaumont; and another in the rugged foothills headed in the direction of the apple-growing community of Oak Glen.

Winds began to slow down about 6 p.m.

"We're looking a lot better," Hawkins said at the time, adding that the blaze is still "nowhere near contained."

More than 200 families in the Highland Springs Mobile Home Park were also evacuated. Those orders were lifted at 8 p.m.

Banning PD asked residents in the Bench area just north of Banning to remain in their homes because surrounding roads were blocked by fire.

Evacuated residents were ordered to go to the Banning Community Center at 789 N. San Gorgonia Avenue.

Crews from Riverside County Fire Department and CAL Fire worked with multiple agencies  -- including from as far away as Orange County -- to control the wildfire that started near North San Gorgonio Avenue and Summit Drive in Banning (map).

"We had an abnormally early start (to the fire season)," Hawkins said. "This is very concerning."

Areas of Southern California on Wednesday were under a red flag warning, or increased wildfire danger, which indicates a dangerous combination of high winds, hot temperatures and low humidity.