Funeral Services Held for LAPD Officer Who Died of COVID-19

Valentin Martinez was a 13-year veteran of the department and is presumed to have contracted the virus on duty.

Martinez was a 13-year veteran of the department and is presumed to have contracted the virus on duty. He was 45 when he died on July 24, leaving behind his mother, his siblings and his domestic partner, who is pregnant with twins.

The service was held at Forest Lawn Hollywood Hills' Hall of Liberty Mosaic Deck, where Martinez's flag-draped casket was escorted to the front of the outdoor facility by pall bearers. Attendees sat in physically distanced chairs in the audience.

Among those on hand for the service were LAPD Chief Michel Moore and Los Angeles Mayor Eric Garcetti, who -- along with most of the others in attendance -- wore face coverings and observed social distancing.

A final farewell will be given to an LAPD officer who died of complications from COVID-19.

"As we all know, in the ongoing threat of this pandemic, it's been necessary to make significant adjustments to our services today; and I want to thank the members of our employee assistance unit, as well as the folks of Forest Lawn for all you've done to support this family and to allow the men and women in this organization, the friends, and others, to grieve ... together, in a manner that is safe,'' Moore said.

"As chief, it falls on my shoulders to bring to this moment some remarks to frame this senseless loss and to bring honor to the life and service of this man, who served this city so well," Moore said.

"He was well-known for his dependability and ability to get along with just about everybody. He carried himself humbly, but with also an air of dedication and integrity. He showed in his actions every day -- each day -- his belief in the mission of the department and the dedicated service to our communities. ... (He was) one of the good ones.''

The approximately 90-minute ceremony included a 21-gun salute and a helicopter fly-over.

Last month, following his death, the Los Angeles Police Protective League Board of Directors said in a statement: "He was a hero lost way too early in life. All of our officers have placed themselves and their families at increased risk throughout the response to the COVID-19 pandemic.'' 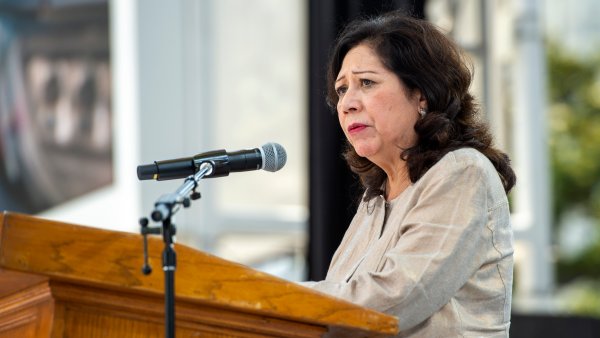 Martinez was the second LAPD employee to die from the illness. Erica McAdoo, a non-sworn senior detention officer, died from the virus July 3. She was 39.