No structures were threatened.

A brush fire in the Gorman area was 55% contained Sunday after burning 340 acres. The fire was reported at about 3:30 p.m. Saturday in the 36000 block of Quail Canyon Road, near Hungry Valley State Vehicle Recreation Park, according to the Los Angeles County Fire Department. The recreation area was evacuated, fire officials said. No structures were threatened.

By 5:20 p.m., the blaze had grown to 320 acres and spread into Ventura County but fire officials reported just before 6 p.m. that fire activity had decreased, and containment lines were cleared around 15% of the blaze. They reported forward progress of the blaze stopped at 6:53 p.m. and later revised the size of the blaze to 340 acres.

Less than an hour before the fire broke out, another blaze was touched off around 2:40 p.m. Saturday, when a white GMC pickup became engulfed in flames on the right shoulder of the Golden State (5) Freeway near Vista Del Lago Road, the California Highway Patrol said. The vehicle's occupants were able to get out safely.

The I-Team sits down with Captain Victor Aguirre and his family to talk about his terrifying experience and amazing recovery. Lolita Lopez reports for NBC4 News at 11 p.m. on July 22, 2021.

Those flames were burning uphill with winds from the south at 15 mph, the LACFD reported when it arrived. By 3 p.m., the flames had spread to five acres and into U.S. Forest Service jurisdiction.

The Forest Service reported at about 5:55 p.m. that forward progress was stopped after the fire consumed just over five acres. The two brush fires were about 10 miles apart and the Hungry Valley fire was not touched off by the first blaze, L.A. County Dispatch Supervisor Bernard Peters said. 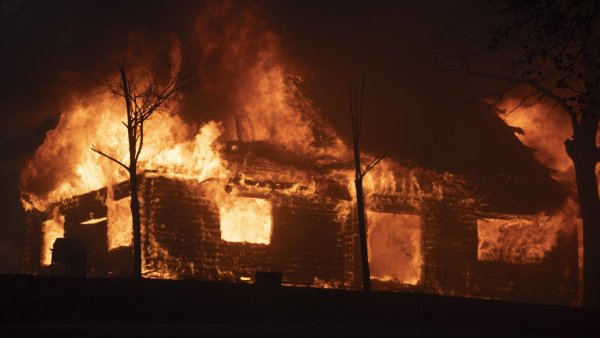