A leaking pipeline off the coast of Orange County sent oil into the Pacific Ocean, posing a threat to wildlife and the environment and closing at least six miles of coastline.

An oil spill from a leak in an underwater pipeline reached the sands of Huntington Beach, forcing closures along the coastline as teams tried to contain the oil and wildlife experts helped birds and other animals.

Below, you'll find an updated FAQ about beach closures, cleanup and containment, and the oil's devastating impact on wildlife and the environment.

Where is the Huntington Beach oil spill?

The oil spill covered about 5.8 nautical miles or 13 square miles between the Huntington Beach Pier and Newport Beach and appears to be moving south. The leak is believed to be about four miles offshore along a 17.5-mile pipeline that is 80 to 100 feet below the surface.

The Coast Guard, which has observed the spill from sea and air, characterized the spill as ribbons of oil and not one large blot.

Oil has been detected from Huntington Beach down to Dana Point and will continue flowing south with the current as it stands.

What caused the oil spill in Huntington Beach?

The spill was due to a pipeline leak from a facility offshore operated by Beta Offshore about five miles off the Orange County coast, officials said. The Coast Guard said a remotely operated observation vehicle indicated a bend in about 4,000 feet of the pipeline. That section of pipeline had been "laterally displaced."

The Coast Guard said there appeared to be a 13-inch split in pipe -- the likely source of the leak.

What caused the leak has not been determined, but there is mounting evidence that it might have been damaged by a ship anchor. Investigators believe a 1,200-foot cargo ship dragging anchor in rough seas caught the pipeline and pulled it across the seafloor, months before the leak.

A team of federal investigators trying to chase down the cause of the spill boarded the Panama-registered MSC DANIT just hours after the massive ship arrived over the weekend of Oct. 16 off the Port of Long Beach, the same area where the leak was discovered in early October.

During a prior visit by the ship during a heavy storm in January, investigators believe its anchor dragged for an unknown distance before striking the 16-inch steel pipe, Coast Guard Lt. j.g. SondraKay Kneen said Sunday.

The investigations include one by the Coast Guard and another by the California Department of Fish and Wildlife. That information will then be presented to prosecutors for possible charges, a department official said at a Monday news conference.

How much oil spilled?

A week after the leak, estimates vary wildly. But on Oct. 14, a Coast Guard official said the amount is believed to be close to 25,000 gallons, or only about one-fifth of what officials initially feared.

The leak was previously estimated to be at least 25,000 gallons and no more than 132,000 gallons . The final count for the spill will likely be closer to the lower figure, which correlates with the amount of oiling seen on the California shore, Coast Guard Capt. Rebecca Ore said Thursday.

How do you calculate the size of an oil spill?

David Pettit, a senior attorney at Natural Resources Defense Council who worked on the response to the massive Deepwater Horizon oil spill in the Gulf of Mexico, said the amount of oil spilled into the ocean should be easily and quickly known to Amplify.

The company should know the oil flow rate at the time of the pipe failure, how much the pressure dropped and for how long, he told the Associated Press. That leaves us with what should be an easy calculation.

When did the oil spill happen?

The leak likely began late Friday or early Saturday. The spill was reported at about 9 a.m. Saturday, although some people reported smelling oil in the water late Friday. Oil began to wash ashore in the hours that followed.

Officials said they believe the pipeline was likely damaged by a ship’s anchor several months to a year before it ruptured. It remains unknown when the crack in the pipeline began leaking oil.

How long did it take to respond to the pipeline leak?

Federal records show an alarm went off in an oil rig company control room at 2:30 a.m. Saturday — signaling a rupture. The company waited more than three hours to shut down the pipeline, at 6:01 a.m., according to preliminary findings of an investigation into the spill.

It's unclear whey the process dragged out for hours.

Some residents, business owners and environmentalists questioned whether the containment response was quick enough. An Associated Press review of records shows the U.S. Coast Guard received the first report of a possible oil spill more than 12 hours before the company reported the major leak in its pipeline.

Rear Admiral Brian Penoyer acknowledged to the Associated Press that the Coast Guard was alerted Friday night by a “good Samaritan” that there was a sheen on the water. It put out a broadcast to the many cargo and tanker ships anchored off the Los Angeles and Long Beach ports seeking more information, but did not receive any supporting reports.

What has Amplify Energy said about the initial response?

Amplify Energy CEO Martyn Willsher was asked repeatedly about the timeline at an Oct. 6, news conference. He said only that the company was cooperating fully with federal and local investigators.

"We are working with them, giving them all the transparency and information that we have,'' he said.

As for whether there was an alarm that alerted crews to a pressure drop, Willsher said, ``We are conducting a full investigation of that ... to see if there was anything that should have been noticed.''

But he questioned whether there were any signs of alarm.

"I'm not sure if there was a significant loss of pressure,'' Willsher said, adding that when his company's crews saw oil in the water at 8:09 a.m. an emergency response was initiated.

"We did not take any additional time,'' he said. ``People were notified very, very quickly.''

Willsher said his company was also unaware of any reports of a sighting of oil in the water as early as 6 p.m. Friday.

"If we were aware of something Friday night I promise you we would have immediately stopped all operations and moved forward,'' he said.

What beaches are closed?

Offshore recovery teams reported Saturday Oct. 10 that they have not observed any free-floating oil in the water for three consecutive days.

"The health and safety of our residents and visitors is of the utmost importance. We understand the significance our beaches have on tourism, our economy and our overall livelihood here in Huntington Beach,'' said Huntington Beach Mayor Kim Carr. "It is important that our decision to reopen our shoreline and water be based on data and that we continue to monitor the water quality going forward.''

The city of Huntington Beach plans to post updates here. 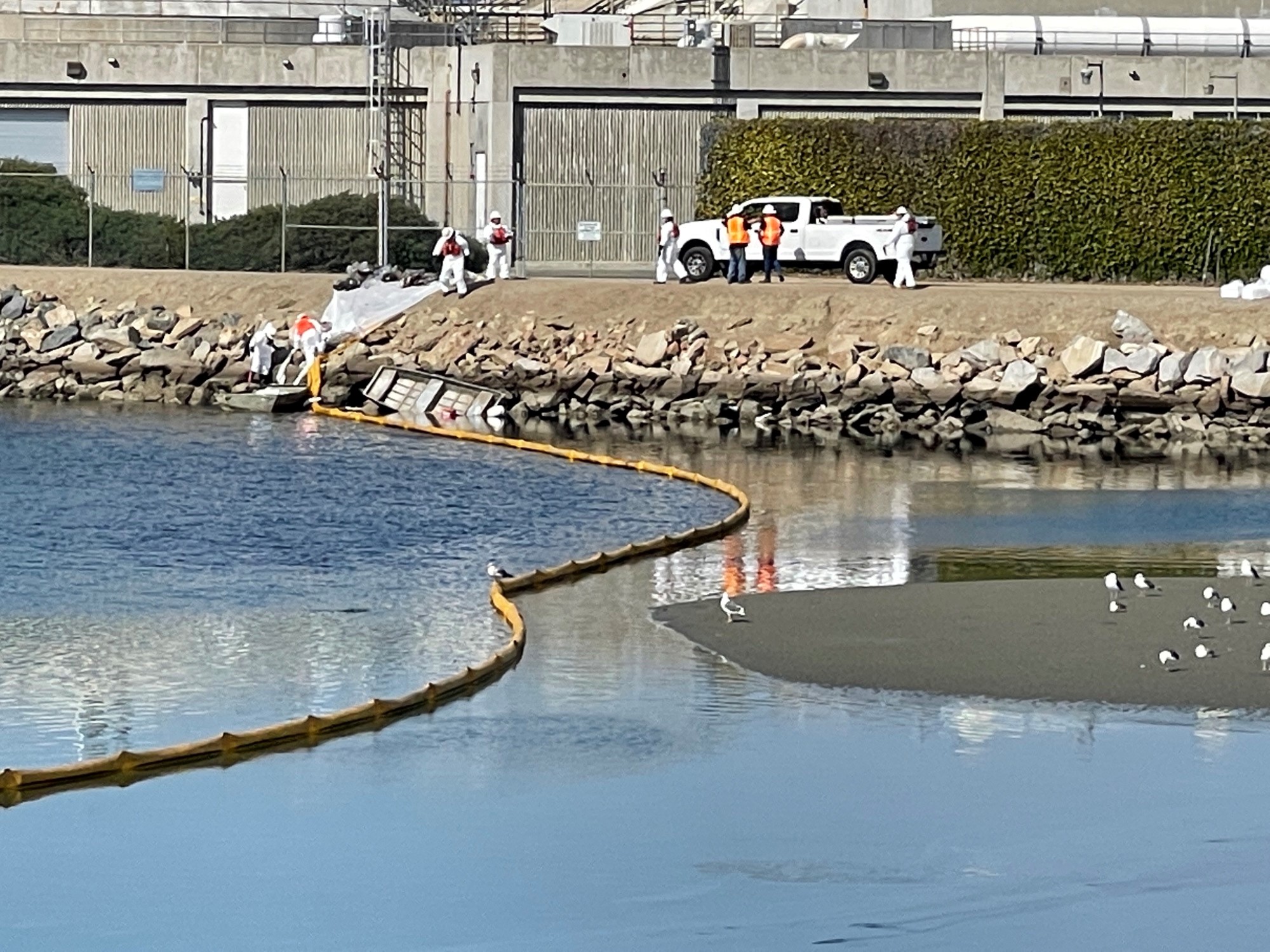 How are crews containing and cleaning up the oil?

Skimming equipment and booms were deployed to prevent the inflow of oil into the sensitive wildlife areas. The oil pipeline was suctioned out so no more oil would spill as the location of the leak was being investigated.

How is the oil spill affecting wildlife?

Oil is harmful to wildlife, but birds are of particular concern. Oil on their feathers prevents them from flying. They also can’t clean themselves and or monitor their own temperatures. Whales, dolphins and other sea creatures can have trouble breathing or die after swimming through oil or breathing in toxic fumes.

The impact on the environment will depend largely on how much oil actually leaked. Local officials, who feared an environmental catastrophe at first, have more recently voiced hope that the total spill will be less than initially feared.

More than 80 birds and fish affected by oil from a pipeline leak off the shores of have been recovered, with more than half dying, officials said Oct. 12. A total 73 birds were recovered, with 45 dying, according to the Oiled Wildlife Care Network. Nine dead fish have also been recovered.

Researchers say the impact on animals will take a while to understand. They are just starting to learn about some of the long-term effects from the 2010 Deepwater Horizon oil spill. And many problems remain unseen as oil components build beneath the surface of the ocean.

How can I help with wildlife recovery?

The California Department of Fish & Wildlife set up the Oiled Wildlife Care Network hotline, at 877-823-6926, for people to call if they see wildlife impacted from the oil. Members of the public were urged not to approach any animals themselves. People wishing to assist with cleanup or wildlife recovery efforts were asked to visit the Surfrider Foundation and HB Wetlands & Wildlife websites.

Here are more ways to help.

Does the oil spill pose a health hazard to humans?

Health officials warned people in the days after the leak not to swim, surf or exercise by the beach because of the potential health hazards. People were also urged not to fish in the area since the waters are considered toxic.

What do we know about the oil platform?

The spill occurred in federal waters at the Elly platform, built in 1980 to process crude oil from two other platforms, which draw from a large reservoir called Beta Field. Houston-based Amplify Energy Corp. is the parent company of Beta Offshore. Elly is one of three platforms operated by Beta Operating Co., which also operates Ellen and Eureka nearby. Elly processes oil production from Ellen and Eureka and is fed by some 70 oil wells. The processing platform separates oil from water.

Have spills like this happened before off the California coast?

During a 10-day period in early 1969, between about 3.5 million and 4.2 million gallons of crude spilled into the Santa Barbara Channel after a blowout six miles offshore on a Union Oil drilling platform. The disaster area was about 115 miles from the site of the 126,000-gallon spill over the weekend that fouled Huntington Beach. The Santa Barbara spill provided momentum for many modern day environmental protection laws.

An estimated 3,400 birds were killed when the American Trader oil tanker ran over its anchor and punctured its hull on Feb. 7, 1990, spilling an estimated 416,600 gallons of crude oil off the coast of Huntington Beach. As a result of the spill, the Wetlands and Wildlife Care Center was established March 31, 1998 at 21900 Pacific Coast Highway to help injured and orphaned wildlife including oil-soiled birds, according to the DFW. A makeshift facility at that site treated birds injured in the 1990 spill, according to the center's website.

We look at previous spills along the coast. Conan Nolan reports for the NBC4 News on Monday, Oct. 4, 2021.
The company said it's closer to confirming the source of the leak. Patrick Healy reports Oct. 4, 2021.