"This is a very good day for victims' rights," said attorney Matt Murphy, who represents four alleged victims in the case.

An Orange County Superior Court judge Thursday handed off the prosecution of a Newport Beach hand surgeon and his girlfriend, who are charged with drugging and raping several women, to the state Attorney General's Office.

Judge Gregory Jones recused the office of Orange County District Attorney Todd Spitzer, who had no objection to his prosecutors being removed from the case against Dr. Grant Robicheaux and Cerissa Laura Riley.

"I am confident that the state's Attorney General's office will resolve this case in a fair and just manner," Spitzer said in a statement released after Jones' ruling was handed down. 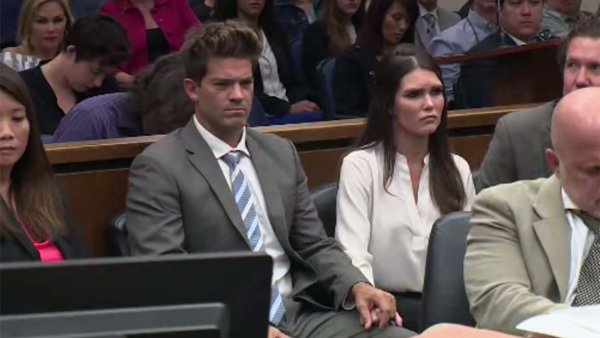 "This is a very good day for victims' rights," said attorney Matt Murphy, who represents four alleged victims in the case.

Mike Fell, an attorney for another alleged victim, said: "The victims are very pleased this case will be going forward and feel comfortable that a prosecutorial agency has finally been elected in order that they may obtain justice."

Robicheaux's attorney, Philip Cohen, sparred with Jones over case law on recusal of prosecutors. The defense attorney argued that Jones could not legally disqualify Spitzer's office and that only the defense could request a recusal.

Jones, however, said he had judicial discretion to remove Spitzer's office from the case.

The judge said the District Attorney's motion to dismiss the case was previously denied, so "that means the case is going to proceed" and added "what difference does it make" who prosecutes it.

Cohen argued that "prosecutorial shopping" is "not appropriate."

"Let's be candid," Cohen said. "What the conflict is in this case is the District Attorney's Office has said we ethically cannot proceed on this case."

The "reason the conflict has arisen is because of this court's action to deny the motion to dismiss and now they are in a position that if they go forward, they're breaching their ethical obligation," he said.

Jones replied that Cohen was arguing the wrong law and pointed to another law that he said shows "it is my obligation to guarantee the integrity of the process."

Cohen countered that the law Jones was citing is "an amorphous section that says the court can do whatever it wants."

Jones said "this can go on and on" and invited Cohen to appeal his ruling.

The judge cited what he believed were inconsistencies in Spitzer's public comments of when he said he ordered a review of his office's prosecution. Jones also said the prosecutors assigned to the case after Spitzer was elected never met with any of the alleged victims, who he said "were not contacted prior to the (D.A.'s) press conference indicating that the case would be dismissed" in February.

"All of the senior deputies in his office agree it should be dismissed, which leaves one to wonder who in the office would be left to prosecute the matter," Jones said.

District Attorney's Office spokeswoman Kimberly Edds said after the hearing that prosecutors "notified the victims shortly before the press conference and we offered to meet with all the victims before we officially made the request to the court to dismiss."

Edds also said prosecutors "met with several victims and both victims' attorneys on behalf of their clients."

The judge said during the hearing that any prosecutor in Spitzer's office who won the case would be in a position of making his boss look "foolish" for saying the case could not be prosecuted. And any prosecutor who did not "vigorously" pursue guilty pleas would leave themselves open to discipline from the State Bar, Jones said.

Cohen complained again about how Spitzer's predecessor, Tony Rackauckas, who filed the charges, said at a news conference that there were potentially thousands of victims and there was proof of it on video. The defense attorney said everyone agreed there is no such proof on the video seized by investigators.

"Mr. Rackauckas is not the District Attorney on this case at this point," Jones replied.

When Cohen tried to interject again, Jones said, "Stop. The issue here is who can proceed with the prosecution? We're not going to talk about (Rackauckas). It has no relevance."

Jones scheduled a hearing for next Thursday to discuss transferring of the case to the Attorney General's Office.

Spitzer's prosecutors in February attempted to have the case dismissed because they argued they did not have enough evidence to prove their case.

However, Jones rejected that motion in June. The defense team has a pending appeal with another Orange County Superior Court judge on Jones' ruling to refuse to dismiss the case.

A defense motion to recuse Jones failed when a Los Angeles Superior Court judge rejected it.

Jones' "intention and design is clear -- because it disagrees with the unanimous conclusion of District Attorney Todd Spitzer; his supervisory lieutenants; and the career sex prosecutors who are assigned to this case… regarding the strength of the evidence, the court is set on recusing the Orange County District Attorney's Office in hopes that the Attorney General's Office, or some other prosecutorial agency, will see this case differently," the attorneys argued in a motion filed last week.

"Despite the court's plain desire, it simply does not have the legal authority to recuse the District Attorney's Office under these circumstances," the attorneys argued.

The defense attorneys in the past have indicated they might file a motion to dismiss the case due to alleged outrageous governmental misconduct owing to complaints with how Rackauckas handled the case.

Victims' advocate attorney Murphy has alleged that the defense attorneys have been colluding with Spitzer to dump the case and argued for a recusal of Spitzer's office from the case.