"Making an image that says, ‘You have to pay bail’ is an important message because people don't know. They think it's easy," one of the artists said.

Several Latino artists have joined forces with pro-immigrant organizations to defend the rights of undocumented people currently in detention centers and to ask that detainees be released as soon as possible.

This effort has become a trend on social media, dubbed "Free Them All," in reference to immigrants detained at ICE centers. Many immigrants remain in custody, despite the country-wide rise in coronavirus cases.

"In the Adelanto Detention Center there are more than eight confirmed cases (of COVID-19)," Javier Hernandez, director of the Justice for Immigrants Coalition, said.

But that's only part of the concern, according to the organization. 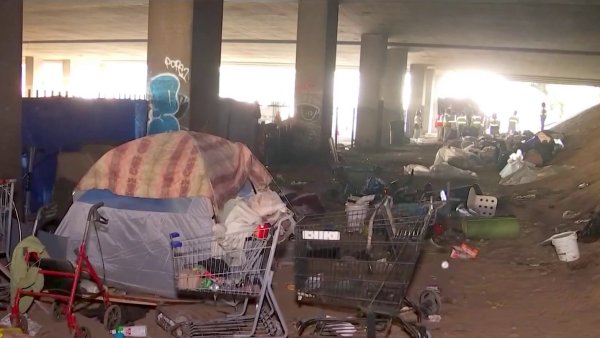 "And the way that GEO and ICE try to alleviate this problem is by putting people in solitary confinement, which is being 24 hours a day separated from anyone," Hernandez said.

He added that these agencies use certain chemicals to disinfect their spaces, which according to complaints, are harmful to the health of detainees.

"For me, it is so inhumane to think that there are people trapped in detention centers because the government is making it so difficult to be able to free them," Julio Salgado, of the Center for Cultural Power, said.

Salgado is one of at least five artists who through his creations is helping to raise funds for those detainees.

"Making an image that says, ‘You have to pay bail’ is an important message because people don't know. They think it's easy," Salgado said.

Salgado moved to the U.S. from Mexico as a child.

"This is not just making art, this is personal, because my family could be affected," he said.

Because of the efforts of these artists, organizations such as the Immigrant Liberation Fund have been receiving donations.

"They are being helped with money for the inmates’ use at the detention center or ‘commissary’, or they can be given money for their bails," Hernandez said.

In that way, the artwork and images put together by the artists have been key to the fight for justice, they say.

In an emailed statement to NBC News about its coronavirus safety practices, ICE stated: "Since the outbreak of COVID-19, ICE has taken extensive steps to safeguard all detainees, staff and contractors, including: reducing the number of detainees in custody by placing individuals on alternatives to detention programs, suspending social visitation, incorporating social distancing practices with staggered meals and recreation times, and through the use of cohorting and medical isolation."

The agency also said its detained population has dropped steadily since the start of March.