Celebrations of the Dodgers' first World Series championship since 1988 were marred by people in downtown Los Angeles looting a tractor-trailer, throwing objects at officers, and vandalizing a police vehicle.

What started as a celebration turned into chaos Tuesday night when vandals damaged buildings and looters grabbed what they could from a big rig trailer that was stopped in a crowd of people in downtown Los Angeles after the Dodgers' World Series victory.

People also stole items from a shoe store, vandalized buildings and at least one patrol car, and threw objects at officers. Some merchandise and shattered storefront glass could be seen on the sidewalk and street in front of Foot Locker store.

Police reported eight arrests and minor injuries to three Los Angeles officers. The arrests included four for looting, three for reckless driving and one for assault with a deadly weapon on a police officer.

Details about how many buildings were damaged were not immediately available. 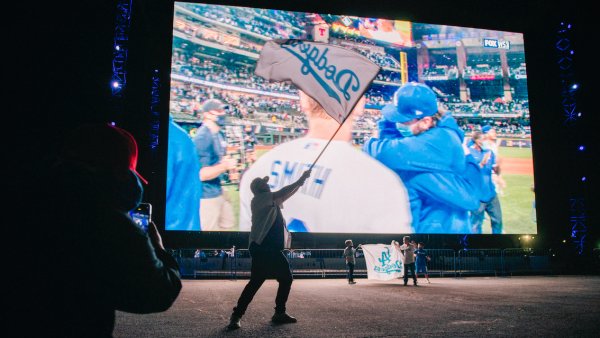 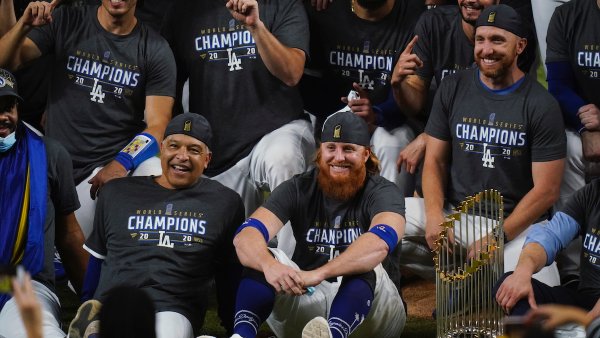 Police declared an unlawful assembly and issued a dispersal order to sometimes unruly and violent crowds early Wednesday morning. The unlawful assembly was declared in the area of Eighth Street to Pico Boulevard and Broadway and Figueroa Street, the Los Angeles Police Department tweeted just before 1 a.m.

"We are still dealing with a large, and at times unruly, crowd in the Downtown L.A. area," the Los Angeles Police Department tweeted just after midnight. "There are several street closures and areas of heavy traffic congestion. Please stay clear of the (downtown Los Angeles) area and expect a large police presence.''

Officers, some on horseback, proceeded through downtown streets, firing non-lethal rounds to disperse a crowd in the area of Eighth and Flower streets, video posted online showed.

Fireworks were being fired off in the area of Eighth Street and Grand Avenue and a bonfire was ignited near Flower and Ninth streets, where glass bottles were thrown at officers.

Video posted on social media showed a Los Angeles police cruiser covered in graffiti and the back window busted out with an officer wearing riot gear inside.

A big rig passing through a large crowd of fans celebrating in and around the intersection at Grand Avenue and Olympic Boulevard around 11 p.m. Tuesday was looted. Video showed people throwing items from the trailer into the crowd.

It was not immediately clear what was inside the trailer.

No arrests or injuries were immediately reported.

A stretch of Whittier Boulevard in East Los Angeles was completely blocked by celebrations until about 11:10 p.m., when Los Angeles County sheriff's deputies moved in and issued an order to disperse. Fans in vehicles in downtown Los Angeles and Pacoima did doughnuts, causing smoke from the tires to fill the streets.

There was also a celebration outside Dodger Stadium while fireworks erupted in Echo Park near the stadium.

Crowds in the street could be heard screaming and cheering as cars honked their horns. Dozens of people were on sidewalks celebrating at the intersection of Sunset Boulevard and Logan Street. 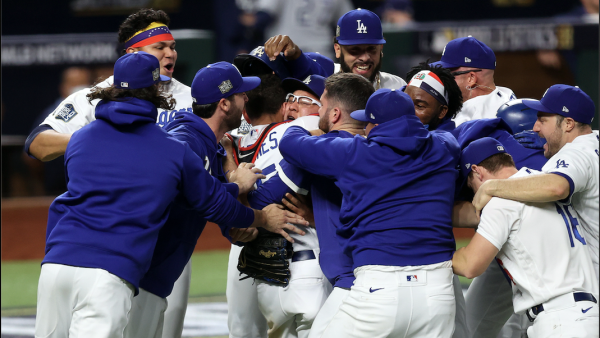 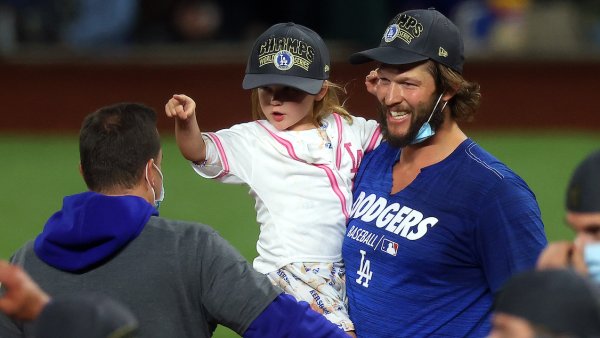 The Los Angeles Police Department is under a citywide tactical alert as a precaution during celebrations of the Dodgers' championship, according to Officer Luis Garcia.

A tactical alert is "an announcement of the anticipated redistribution of on-duty officers to achieve personnel levels necessary for controlling an emergency," according to the LAPD. Officers are kept on the job beyond the end of their shifts.

Streets around Dodger Stadium were closed to traffic, with police assisting drivers getting out of the area after the game, according to the Los Angeles Police Department.

People were urged to avoid the area and residents to have identification in order to be allowed through the area.

Metro bus service was delayed or detoured in certain areas due to fan celebrations, according to Metro's Rick Jager.

The following lines were being detoured around street closures:

"As we celebrate this incredible @Dodgers victory tonight, we need to remember that COVID-19 is still here and still dangerous," Garcetti tweeted. "Please don't host or attend victory parties, or gather in large groups to celebrate. Let's keep L.A. safe."

In a video played on the LAPD's Twitter account, Scully said, "I know you want to celebrate like everybody else, but let's do it properly, let's do it the way the Dodgers did, with pride in themselves and pride in our great city. Let's show the rest of the country that we know how to celebrate the proper way."

Moore tweeted his congratulations to the Dodgers for "a hard-fought #WorldSeries victory," then added, "Now let's all make them proud by celebrating with class and style."