In his interview with AP, Los Angeles County Sheriff Alex Villanueva also rejected claims the criminal justice system is biased against people of color, saying his department is committed to thorough investigations, including of its own employees.

The Los Angeles County sheriff on Monday criticized elected officials, sports figures and civic leaders for “fanning the flames of hatred” as America grapples with racism and police brutality, saying they instead should emphasize trust in the criminal justice system.

Sheriff Alex Villanueva’s comments to The Associated Press came after the weekend ambush of two deputies who were in their parked police vehicle when a man walked up to the passenger’s side and fired multiple rounds. The deputies were struck in the head and critically wounded but both are expected to recover, Villanueva said. The gunman hasn't been captured and a motive has not been determined.

The shooting occurred in Compton, one of the communities near South Los Angeles, an area with a large Black population that has long been a flashpoint for racial tension and mistrust of police. Hundreds marched Saturday to the Sheriff’s Department South LA station to protest the fatal shootings of a Black man on Aug. 31 and a Black teenager in 2018.

Both were killed by deputies from the station, which is about 6 miles (9.66 kilometers) from where the deputies were targeted Saturday. After that shooting, a handful of protesters gathered outside the hospital where the deputies were treated and tried to block the emergency room entrance. Videos from the scene recorded protesters shouting expletives at police and at least one yell “I hope they ... die.”

“They’re out there doing their job and yet we have people fanning the flames of hatred and just turning up the volume when we don’t need it. We need to be turning it down,” Villanueva said. “Particularly our elected officials and civic leaders and sports figures, they need to start emphasizing trust in the system, due process.”

Villanueva did not specify any particular people in the AP interview, but many politicians and athletes have harshly criticized police and called for defunding departments in the wake of the killing of George Floyd, a Black man who died in Minneapolis after a white officer pressed a knee to his neck, and shooting of Jacob Blake in Kenosha, Wisconsin.

The NBA playoffs were delayed last month when Los Angeles Lakers star LeBron James and other stars supported the Milwaukee Bucks' decision not to play following Blake's shooting. U.S. Open winner Naomi Osaka of Japan wore masks with the names of Black victims of violence throughout the tennis tournament.

In an interview Monday with 790 KABC radio about the shooting, Villanueva challenged James to match the reward money put up for information about the Compton shooter.

“I’d like to see LeBron James step up to the plate and double that,” Villanueva said.

After 29-year-old Dijon Kizzee was killed by two LA County deputies last month, U.S. Rep. Maxine Waters, a Democrat who represents part of South Los Angeles, said “while we don't know all of the details of this incident" she shares the community's outrage and that the message from police killings is “the lives of people of color do not matter and that the practice is to shoot first and ask questions later." 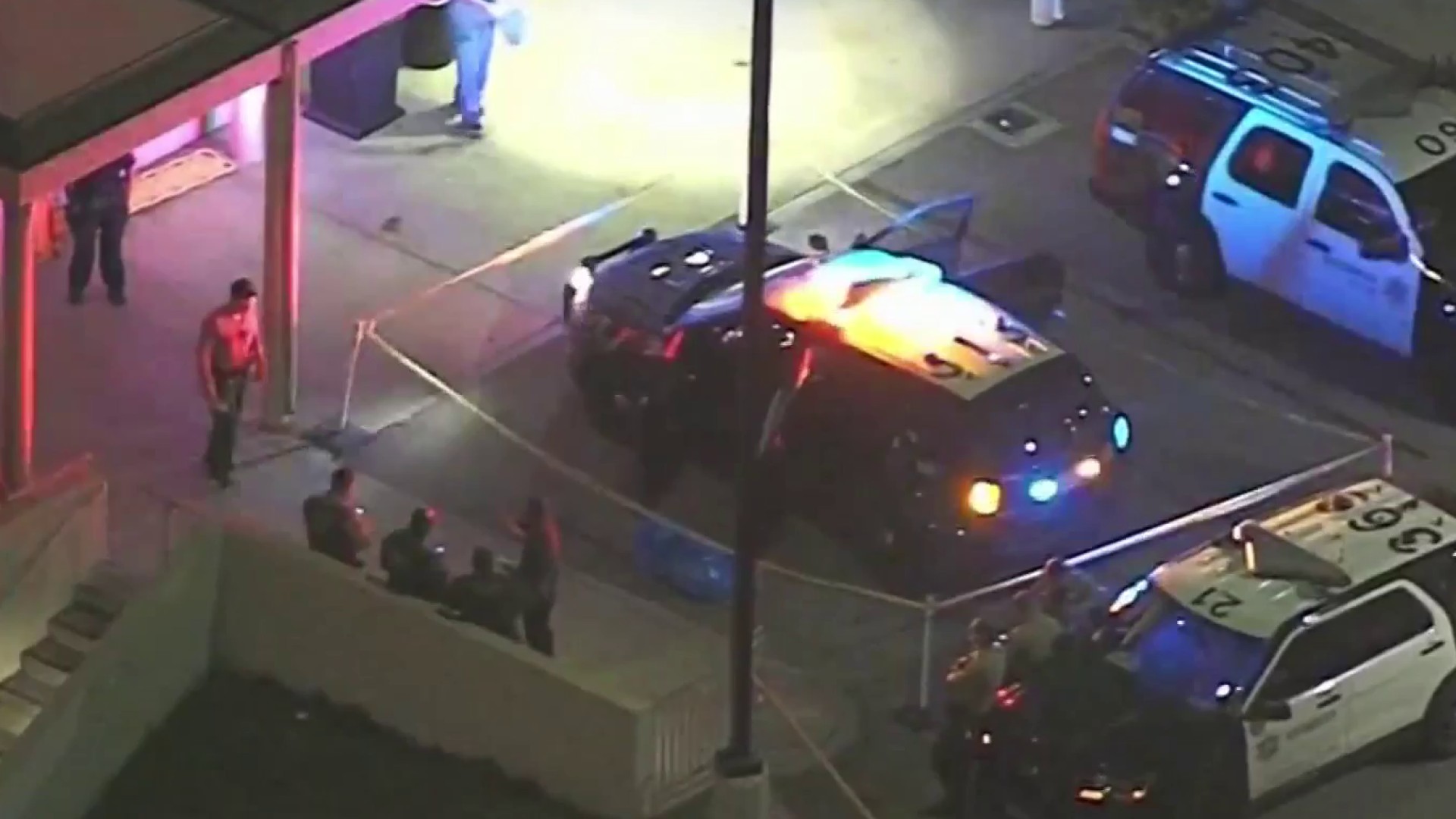 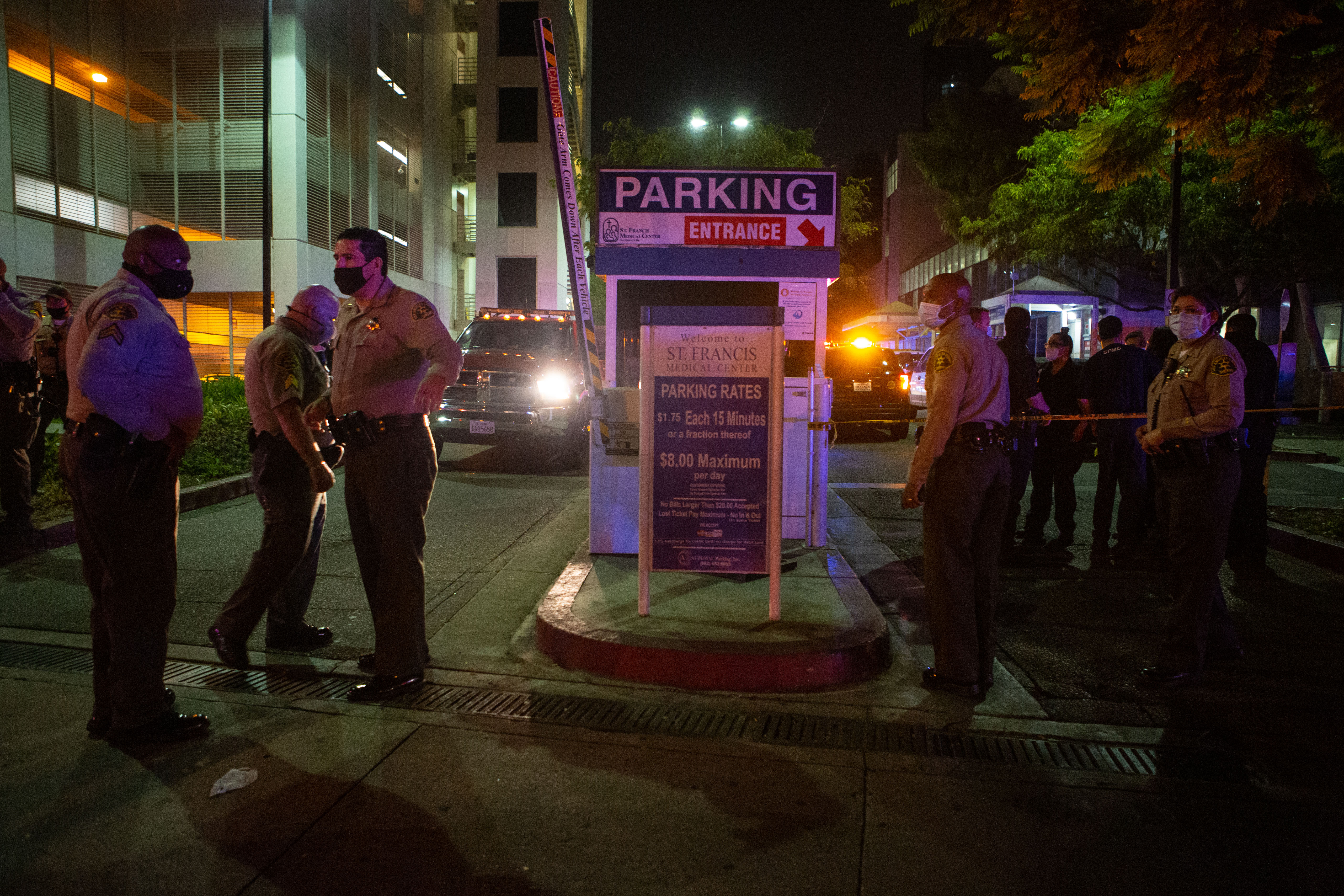 She said the Sheriff's Department is out of control and called on state Attorney General Xavier Becerra to investigate “the pattern of abuses."

The department has begun its own investigation of allegations that a renegade group of deputies calling themselves The Executioner s have taken control of the Compton station through threats, intimidation and harassment.

Ron Hernandez, president of the Association for Los Angeles Deputy Sheriffs, said his organization is open to overall reform — he disputed any claims of renegade groups of deputies — but Saturday's shooting could never be justified as part of potential anti-police rhetoric.

“When you're sitting there doing paperwork and providing safety for the community, and somebody from the public comes out and ambushes you and tries to kill you, there's no valid explanation for that,” he said during a Monday news conference outside the hospital. “I don't care how angry the public, I don't care how angry even the people that might protest are. That's not going to resolve anything.”

In his interview with AP, Villanueva also rejected claims the criminal justice system is biased against people of color, saying his department is committed to thorough investigations, including of its own employees.

“To someone who says they’re biased, the only bias we have is toward facts," he said. “We need to stop the false narratives. We have to let the system take its course and justice has to be based on facts, based on evidence. It has to be right.”

“We’re not going to speed up or slow down at the behest of anybody,” he said. “It’s going to be based on fact, not on emotion. Some people already have determined the results, so they’re trying to throw rocks at the process.”

Meantime, Villanueva defended the arrest of Josie Huang, a reporter for public radio station KPCC taken into custody during Saturday's demonstration outside the hospital. The department said Huang didn't identify herself as a journalist and interfered with the arrest of a protester.

After she was released, Huang tweeted she was “filming an arrest when suddenly deputies shout ‘back up.’ Within seconds, I was getting shoved around. There was nowhere to back up."

In a video of the incident, Huang can be heard shouting, “I’m a reporter. ... I’m with KPCC” as she falls to the ground. She said she was wearing a press pass.

Villanueva said Huang was too close to the deputies during the man's arrest. He claimed “that's where she crossed the line from journalism to activism.” He said he didn't know if the deputies heard her shouting “I'm a reporter.”

“You have to have a certain level of responsibility as a journalist,” Villanueva said. “Do your job but do it at a safe distance where you’re not interfering with the deputies doing their job.”

He added: "All I can say is, in the heat of the moment when these protesters are calling or chanting for the death of the deputies in the emergency room, she picked the worst time possible to try to get an up-close of the deputies making an arrest. That’s on her."