Prosecutors portrayed Michael Gargiulo as a "stone-cold serial killer who preys on women," ambushing victims in a series of calculated attacks.

A man dubbed the "Hollywood Ripper" was sentenced to death Friday for killing and mutilating two Southland women, including one who died hours before she was set to go out with actor Ashton Kutcher.

Shortly before being sentenced, Michael Gargiulo denied being involved in the slayings, said he is unjustly being sent to death row and blamed his attorneys for not allowing him to testify during his trial. 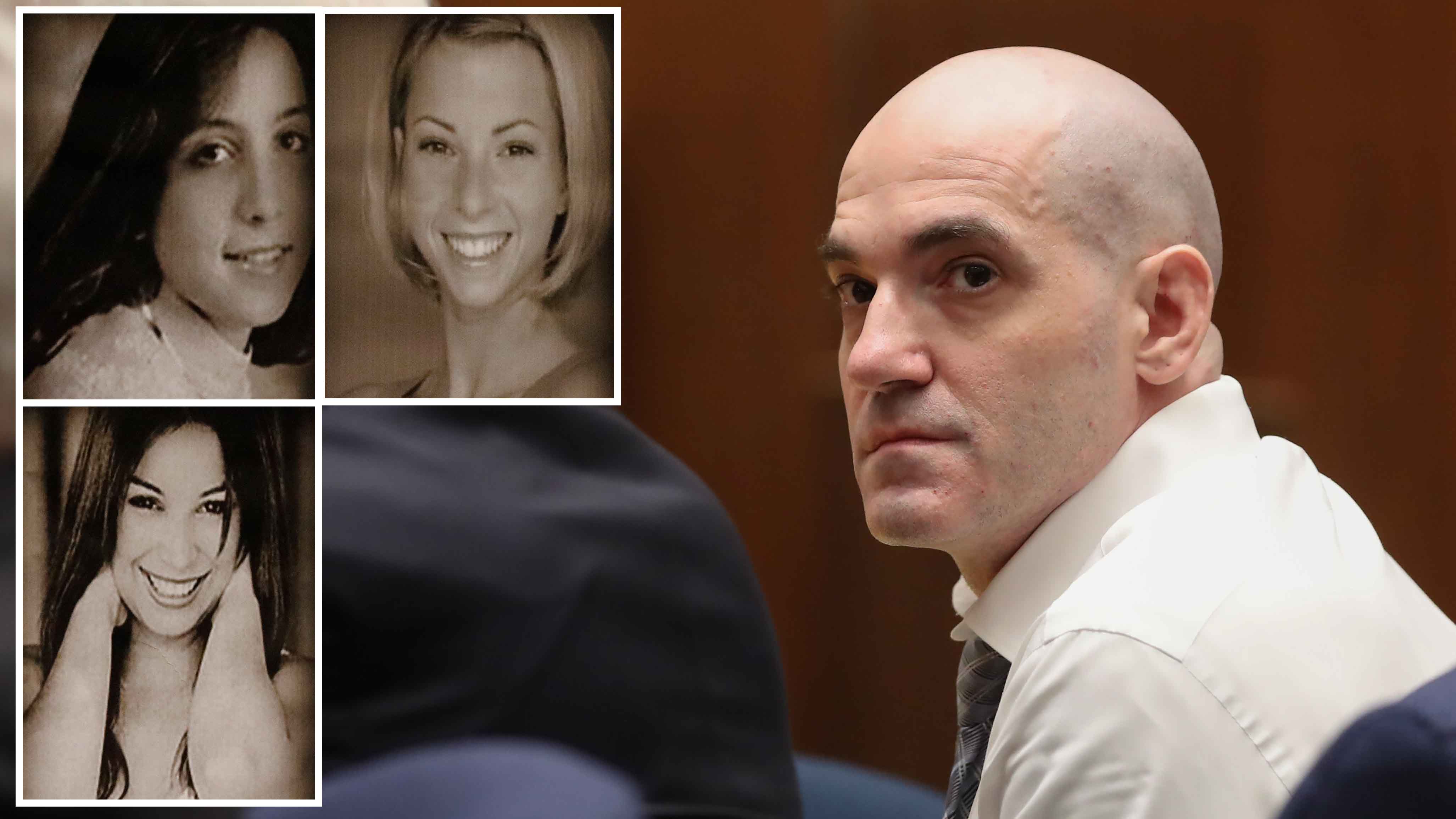 Gargiulo was convicted of the Feb. 22, 2001, slaying of 22-year-old Ashley Ellerin in her Hollywood bungalow hours before she was set to go out with Kutcher, along with the Dec. 1, 2005, killing of Maria Bruno, a 32-year-old mother of four young children, in her El Monte apartment.

He was also found guilty of attacking a third woman, Michelle Murphy, who survived, testified against him at his trial and returned to the downtown Los Angeles courtroom for his sentencing.

"In this case, everywhere that Mr. Gargiulo went, death and destruction followed," the judge said in denying the defense's motion for a new trial.

Calling the circumstances of the attacks "completely vicious and frightening," the judge also rejected an automatic motion to reduce the jury's October 2019 recommendation of a death sentence for Gargiulo to life in prison without the possibility of parole.

One of Gargiulo's attorneys, Daniel Nardoni, told the judge that "it's not right to execute a mentally ill person," while Deputy District Attorney Dan Akemon said he and fellow prosecutor Garrett Dameron objected to the sentence being reduced.

Fidler said he "read and considered" a statement from Gascon, which was not read in open court.

Ellerin's father, Michael, said he wanted to go on record to object to Gascon's "political intrusion into my daughter's murder trial," and said he also wanted Gov. Gavin Newsom to know that he has "no right to ignore the documented will of the voters" through the 2019 moratorium he imposed on the death penalty in California.

The victim's father noted that it took "two decades to get to the sentencing" of a man whom he said killed "for the thrill of it." He said his son "chose not to be here today with the evil sociopath that killed his sister."

Murphy told the judge that it has been an "exhausting journey" since she was stabbed eight times in her Santa Monica apartment on April 28, 2008, and said she still fears spending the night alone.

Gargiulo was convicted of first-degree murder for the two slayings, along with Murphy's attempted murder.

Jurors also found to be true the special-circumstance allegations of multiple murders and murder while lying in wait, and subsequently found that he was sane at the time of the crimes.

He is still awaiting trial in Illinois, where he was charged in 2011 with killing an 18-year-old woman, Tricia Pacaccio, who was repeatedly stabbed on her front doorstep after returning home in Glenview, Illinois, from a night out with friends Aug. 14, 1993. She was the sister of one of Gargiulo's childhood friends.

Jurors in Gargiulo's Los Angeles trial heard about Pacaccio's killing, with her mother and two brothers testifying during the trial's penalty phase.

The panel also heard from family members of Ellerin and Bruno, along with Murphy and her husband.

Gargiulo's son, then 16, testified that he didn't want his dad to be executed, telling jurors, "I don't see a psychopath. I don't see a murderer. All I see is (my) father."

Nardoni told the judge that he believed there was "ample evidence for third-party culpability that raises a reasonable doubt" that others may have been responsible for the killings.

The defense attorney had pleaded with jurors to show mercy to his client and urged them to consider testimony about Gargiulo's upbringing, including a forensic psychologist's account of childhood abuse by family members.

Another of Gargiulo's attorneys, Dale Rubin, told jurors during the trial that the attempted murder charge involving Murphy -- in which DNA evidence allegedly linked Gargiulo to the attack -- was the "only count in which the prosecution has shown Mr. Gargiulo was in her apartment and attacked her."

Rubin cited a defense expert's conclusion that Gargiulo suffered from dissociative identity disorder, arguing that it could have caused him to go into an "amnesiac" or fugue state during the attack on Murphy.

Akemon countered that there was a "mountain of circumstantial evidence" against Gargiulo linking him to the killings.

Fidler rejected the defense's request for a continuance in the sentencing based on a letter sent to Gargiulo by a former detective in Illinois who indicated that there may be a different suspect in Pacaccio's killing.

Akemon said he did not feel the letter was exculpatory and expects Gargiulo to be extradited to Illinois to stand trial there.

"There is nobody else who's about to be indicted for the murder of Ms. Pacaccio," the prosecutor said.

The violent nature of the attacks earned Gargiulo the moniker "Hollywood Ripper." Akemon also referred to the defendant during the trial as the "Boy Next Door" killer, noting that he lived near all of his victims and telling jurors that he targeted the women in "frenzied knife attacks" that are "inextricably linked."

After Pacaccio was killed outside her Illinois home, Gargiulo moved to Hollywood, where Ellerin's friends noticed that he showed up uninvited to a party and that he seemed to be fixated on her, according to the prosecution.

Kutcher -- known for co-starring in the TV sitcoms "That '70s Show" and "Two and a Half Men" -- testified during the guilt phase of the trial that he had spoken to Ellerin on the phone the afternoon she died and showed up at her home two hours later to pick her up. When she didn't answer her door, the actor said he looked through a window and saw what he believed was red wine spilled on the carpet. He said he left because he thought Ellerin had already gone out for the night.

Ellerin's roommate discovered her dead the next morning. She had been stabbed 47 times in the hallway outside her bathroom in an attack in which she was nearly decapitated.

Gargiulo subsequently moved to El Monte and lived in the same apartment complex where Bruno was "mutilated" as she slept, Akemon said. The prosecutor said Gargiulo stabbed the 32-year-old woman 17 times, cut off her breasts, tried to remove her breast implants and placed one of her breasts on her mouth.

Gargiulo was able to escape detection until he accidentally cut himself with a knife during the 2008 attack on Murphy -- near where he lived at the time in Santa Monica -- and left a "blood trail" during that attack, Akemon told jurors.

He was initially arrested in connection with the attack on Murphy and was subsequently charged with the killings of Ellerin and Bruno and later with Pacaccio's killing in Illinois.