In a recording from a police scanner, the injured deputy can be heard saying he has been shot in the head, while multiple rounds of shots are heard in the background.

Los Angeles County Sheriff's officials have arrested two suspects, after a Los Angeles Sheriff's Deputy was was wounded in a gunfight while responding to an armed robbery call in the Lynwood area Monday night.

The shooting happened around 7:15 p.m. near Lorraine Street and 112th Street in Lynwood.

Officers approached the suspects of a black pickup truck allegedly wanted for robbery. That scene quickly turned into an ambush near Lorraine and Fernwood Avenue, when the suspects made a U-turn and began driving toward the deputies while exchanging gunfire with them.

One deputy was struck by gunfire during the exchange.

In a recording from a police scanner, the injured deputy can be heard saying he has been shot in the head, while multiple rounds of shots are heard in the background.

The deputy, who has not been identified, was struck in the upper body and was rushed to St. Francis Medical Center by another deputy in a police vehicle.

The injured deputy was alert and responsive on the way to the hospital, and officials later confirmed that he is expected to recover. He underwent surgery to remove a bullet and was "awake and in good spirits" after the surgery, according to Koerner.

Our Newschopper4 was overhead for the aftermath of the gunfire. The black pickup truck and police vehicle had visible bullet damage from the confrontation.

The SWAT team arrived at the scene and closed a perimeter to begin the manhunt. Residents were told to remain indoors and as the investigation began.

The suspect that was inside the pickup truck fled the scene. He allegedly led deputies on a high-speed chase in a white pickup truck, during which he barely missed collisions with several vehicles on the southbound 710 Freeway.

After leaving the freeway, the suspect crashed into an electrical pole and a median near Eastern Avenue and was arrested, authorities said. He was taken to a nearby hospital with non-life-threatening injuries, according to Koerner.

At least one deputy discharged a weapon at the end of the pursuit, but sheriff's officials said it was determined that the suspect was not shot.

The other suspect was detained at the scene and detectives found three
handguns, which they believe were used by the suspects in the robbery, Koerner
said. 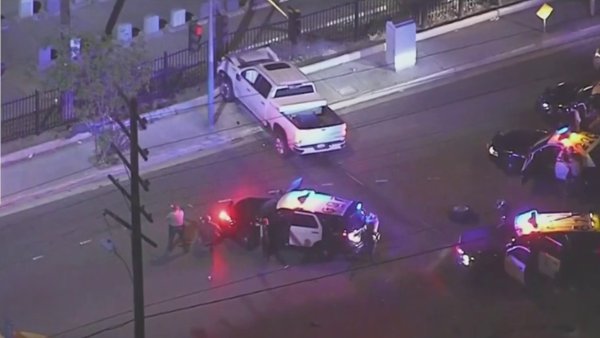