Four people, including a 9-year-old boy, were killed when a gunman opened fire Wednesday at an office building in Orange.

Authorities have identified four people, including a 9-year-old boy found by responding officers cradled in a woman's arms, who were killed when a gunman opened fire at an office building in Orange.

Police said Luis Tovar Sr.; daughter Jenevieve Raygoza, 28; Matthew Farias, 9, and Leticia Solis Guzman, 58, were killed in Wednesday's shooting. The 9-year-old boy was found by police cradled in the arms of a woman, according to authorities.

That woman was later identified as Blanca Tomayo, the mother of Matthew and Raygoza. She remains hospitalized in critical condition.

“He was a hard-working guy,” said Luis Tovar Jr. “He always put his family first. Always put others in front of himself."

Scott Clark, who is owner of Calco Financial that is two doors down from Unified Homes, described Luis Tovar as hard-working.

Clark left his office on Wednesday, around 4:45 p.m., earlier than usual. Police received the first reports of a shooting around 5:30 p.m.

“I must have had an angel from God watching out for me to make me leave an hour before I usually do,” he said.

Details about the connection between Tovar Sr. and the shooter were not immediately available, but authorities said all the individuals had some type of business or personal relationship. Gonzalez's wife worked at Unified Homes two years ago, police said.

"This was not a random act of violence," Orange Police Lt. Jennifer Amat said. "We believe everyone knew each other, whether through a business or personal relationship."

Aminadab Gaxiola Gonzalez, 44, was identified as the suspected shooter. He was in critical but stable condition. It wasn’t clear whether he was wounded by police or shot himself, Amat said.

He was charged Friday with four counts of murder and one count of attempted murder.

The son of one of the victims describes getting the call and word of the shooting. Vikki Vargas reports April 1, 2021.

"Why, is the only thing," said long-time family friend and business owner Alec Torres. "I don't know what his motive was.

"It's just, why did you do this? Why did you have to ruin so many lives?"

Gonzalez, from nearby Fullerton, was staying at a motel in neighboring Anaheim and used a rented car to arrive at the two-story office building on Lincoln Avenue, Amat said. 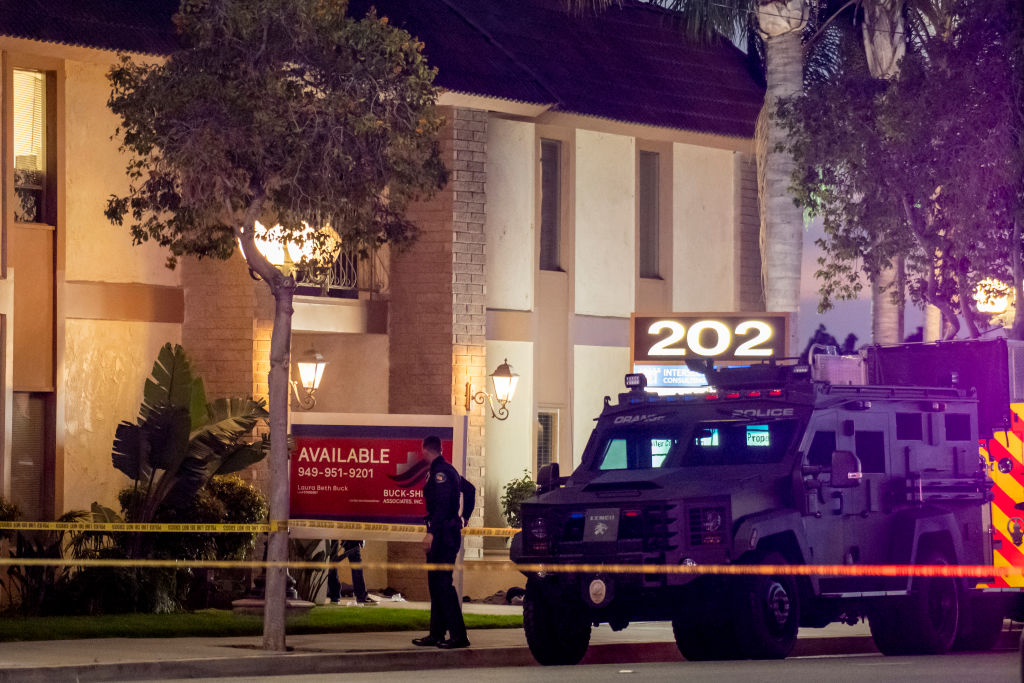 He chained the front and rear gates to the complex with bicycle cable locks and was spotted on security video wearing a bandana over his face, brandishing a semautomatic handgun and hauling a backpack that contained pepper spray, handcuffs and ammunition, police said.

Reports of shots fired sent officers to the scene within two minutes, and they exchanged gunfire with the shooter through a gate before the locks were cut, Amat said.

A man was found dead inside an office, a woman in another office and a second woman was found on an outdoor landing upstairs.

Gonzalez was taken into custody and remains hospitalized in critical condition.

The violence in the city of Orange was the nation’s third major mass shooting in just over two weeks. Last week a gunman opened fire at a supermarket in Boulder, Colorado, and killed 10. A week before that, six Asian women were among eight people killed at three Atlanta-area spas.