Protests broke up after a curfew that began late Monday in Santa Ana.

Dozens of people defied a curfew in Santa Ana to protest the recent shooting death of an 18-year-old man by Los Angeles County sheriff's deputies, but no arrests were reported.

The curfew began at 10 p.m. Monday and was set to expire at 5 a.m., according to the city, which implemented the curfew to prepare for possible civil unrest during the protest.

Protesters stood on a street corner at Bristol Street and McFadden Avenue, with officers nearby, video from the scene showed. The protest ended about 10:15 p.m., the Orange County Register reported. 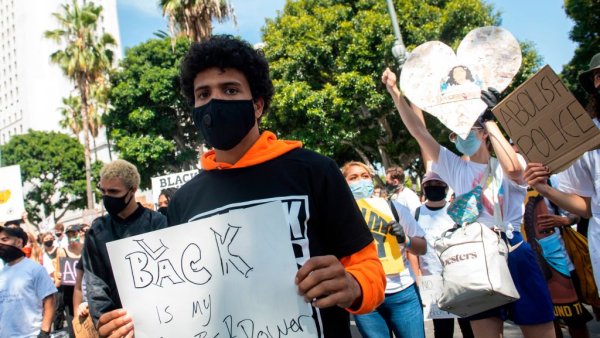 Father's Day Protests and Marches Against Racism and Police Brutality

“The City of Santa Ana supports the public's right to peaceably assemble and protest outside of the curfew hours,'' a post on the city's Instagram account read. “The Santa Ana Police Department will be actively monitoring the situation to maintain public safety.”

Earlier, protesters marched in the streets, set off fireworks and, at times, laid down on the road, to demand answers in the shooting death of Andres Guardado near Gardena on Thursday afternoon.

In Gardena, family members gathered at a vigil.

Guardado, whose family said he worked as a security guard, wasn't wearing a uniform at the time. Authorities have said he was armed, and that Guardado was not a licensed security guard.

Investigators do not believe he fired the gun.

An 18-year-old male was shot and killed by deputies in Gardena. As an investigation continues, Kim Tobin reports for the NBC4 News at 5 p.m. From Monday, June 22, 2020.

Reps. Maxine Waters and Nanette Diaz Barragan earlier said in a statement that there's a need for an independent investigation into the shooting death so the public will trust the findings.

Capt. Kent Wegener, the head of the department's Homicide Bureau, said Saturday that investigators have taken six or seven exterior cameras from the scene and are examining the footage.