A red flag warning issued for parts of Southern California will remain in place through Saturday afternoon as fierce wind gusts continue to howl in parts of the region.

The strong winds raise the risk of rapidly spreading wildfires and the possibility of public safety power shutoffs. A peak Thanksgiving wind gust of 79 mph was recorded in Orange County's Fremont Canyon.

A red flag warning that went into effect at 2 p.m. Thursday was expected to last until 6 p.m. Saturday for the Los Angeles County mountains and the Santa Clarita Valley. The red flag fire weather warning also is in effect for mountains and valleys of southwestern San Bernardino and western Riverside counties, and inland Orange County, including the Santa Ana Mountains.

The winds and low humidity — combined with dry brush in fire-prone areas — will create dangerous wildfire conditions through Friday night. The winds are expected to weaken over the weekend.

Our winds will be improving, but the fire danger will still stay high because of warming temperatures over the weekend," said NBC4 forecaster Belen De Leon.

Highs are expected in the middle to upper 70s.

The winds could mean public safety power shutoffs for some Southern California communities. SoCal Edison might shut off power when there's a risk of wildfires to prevent ignition from downed power lines.

"Turning off our customers' power is not something we take lightly, but Public Safety Power Shutoff events are one of the ways we can better ensure the safety of the public, our customers, and our employees,'' Edison said on its website. 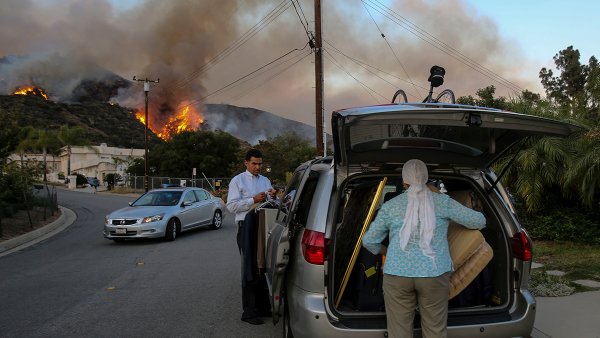 Several large fires in California have been linked to electrical equipment.

The utility says it generally sends customers a notice of a power shutoff 48 hours in advance.

"If your power has been shut off, we will restore power as soon as the weather conditions permit, and crews have inspected the power lines to confirm it is safe to restore power,'' Edison said.