The disorder began after the last day of Vans U.S. Open of Surfing events.

A violent crowd raged through Huntington Beach on Sunday night after a surfing competition, clashing with police, toppling portable toilets, brawling in the streets and vandalizing and looting at least one business, according to police and witnesses.

The violence erupted among a crowd of thousands gathered for the Vans U.S. Open of Surfing, which includes surfing, skateboarding and BMX biking events, possibly after a fistfight in downtown Huntington Beach (map). City vehicles, newspaper racks and street signs also were damaged in the wave of violence on and near Main Street. 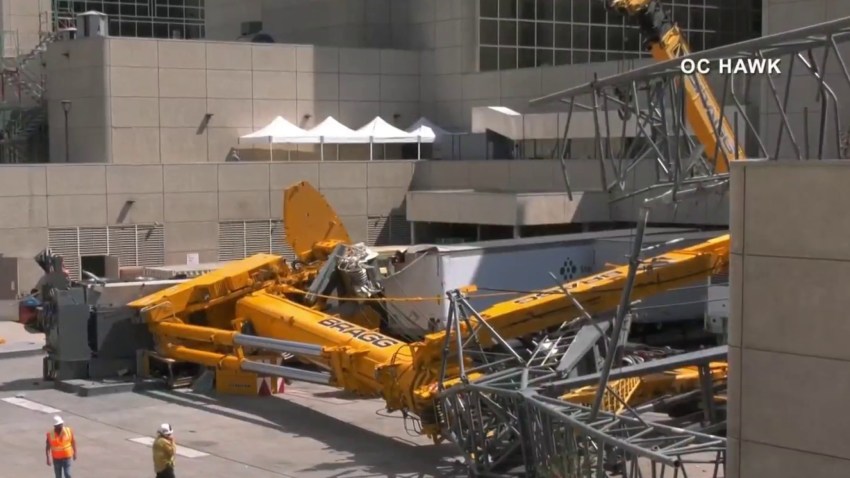 Police made eight arrests on suspicion of failure to disperse, according to a Huntington Beach Police Department statement.

People strapped bandanas across their faces and threw rocks and bottles at police officers. Police donned riot gear and fired back with pepper balls.

Aerial footage showed about 18 overturned portable toilets on the streets of downtown Huntington Beach. It was unclear exactly when the riots began, but witnesses began mentioning the riots in social media posts earlier than 8 p.m.

Witnesses said the violence stemmed from a fight and spread along the Main Street area.

"A lot of little fights broke out from there," said witness Doug Cavender.

A video posted to Facebook showed a group throwing a stop sign through a store window and making off with merchandise, including a bicycle. A stop sign post was sheared off and used to shatter the store window of the HB easyrider shop.

"We were all huddled inside the building and we had the lights off because all the people were up here mobbing around, and I was inside and I saw them tearing down the stop sign," he said. "As soon as that stop sign came down, I knew that stop sign was coming through the window. And sure enough, two seconds later, it did."

One of the people made off with a bicycle before others in the crowd stepped in and defended the store, Etheredge said. Video showed an employee inside the store window involved in a tug-o-war-style fight for a bike.

By about 9 p.m., the commotion appeared to have ended and the streets were mostly cleared, except for a heavy police presence.

Police asked that anyone with information, photos or video of crimes related to the violence call the Huntington Beach Police Department Hotline at 714-375-5066.