The Rams would like to beat the Saints this time without help from the absence of a flag.

Los Angeles' 26-23 overtime win over New Orleans in last season's NFC championship game had wild momentum swings and exciting performances from two of the best offenses in NFL history — and two defenses who did a surprisingly solid job of slowing them.

But the game is sure to go down in football annals mostly for the uncalled pass interference by Rams cornerback Nickell Robey-Coleman against Saints receiver Tommylee Lewis late in the fourth quarter. Although the legal challenges were dropped this week, many Saints fans still haven't stopped complaining about the non-call that prompted the NFL to change its replay review rules in the offseason. 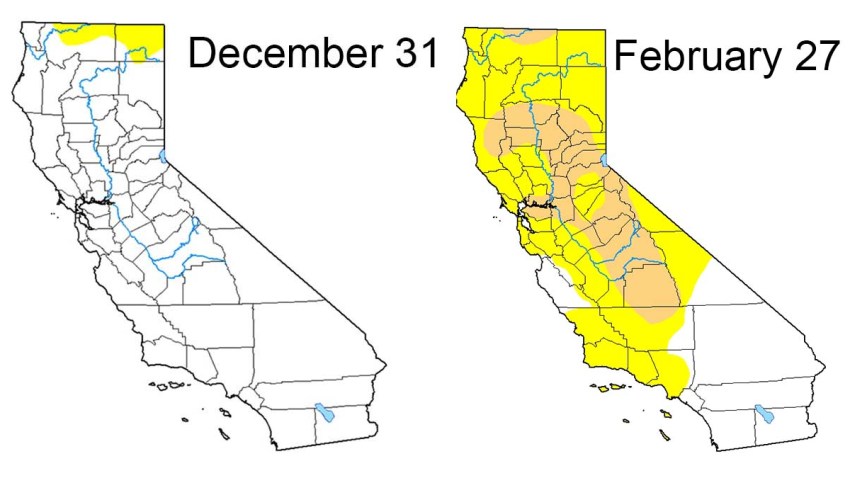 After a Dry February, Here’s Where Drought Conditions Expanded in California

The Rams and their fans have a different overriding reflection they're taking into the teams' marquee early-season rematch at the Coliseum on Sunday.

Indeed, the Rams reached their first Super Bowl in 17 years after holding the Saints' high-octane offense to 290 yards and allowing just 10 points after the first quarter. Phillips and his defense will try for a repeat of that excellence against Drew Brees, Alvin Kamara and Michael Thomas, while the Saints' defense must contend again with Todd Gurley, Jared Goff and the Rams' quietly devastating corps of receivers.

Their fans might be another matter, but the Saints (1-0) aren't wasting time thinking about the Super Bowl that got away. Coach Sean Payton realizes his team got the ball first in overtime, but couldn't finish.

"It feels like it was a long time ago," Payton said. "It's part of our game. These are two different teams now. A lot of roster moves from last year to this year. We're playing each other early in the season, so it doesn't feel like that many games ago ... but you're looking at two different teams."

They might be different, but they're both expected to be major contenders in the NFC again this year. The Rams' home opener will allow one team to set a tone in the conference race.

"There's nothing that we're taking from last year as motivation," Goff said. "If they are, great. It's just another game for us, and it's our home opener after not being at home for a long time."

Here are more things to know about the rematch:

The Saints' offensive line passed its first big test in Week 1, allowing one sack on a linebacker blitz and neutralizing 2018 AFC sacks leader J.J. Watt, holding him without a single significant defensive statistic. The only time Watt influenced the game was when Ryan Ramczyk, his main blocker, was flagged for holding early in the fourth quarter.

Now the Saints must find a way to slow down 2018 NFL sacks leader Aaron Donald. "He's got such a high motor," Brees said. "He is full-go, all the time. He is so multiple in the things that he can do, the moves that he can give you, the inside, the outside, the rip, the jump. I don't even have names for all the moves that he can do to get to the quarterback. You cannot block him with one guy. He's just that good a player. He's such an impact player. He can change the game. I don't know if I've ever seen anybody like him."

The concerns about Gurley's apparently balky knee looked fairly unfounded in the Rams' opener at Carolina, where he rushed for 97 yards and looked dangerous. The Rams still expect to use backup Malcolm Brown extensively, but Gurley and an offensive line with two new starters appeared to be in solid form so far. Gurley participated in practice on both Wednesday and Thursday this week, not taking a day off to rest.

The Rams appeared to find a formula for covering Thomas, the Los Angeles native whose Twitter handle includes the phrase, "can't guard Mike." It took getting burned once to do it. In a 2018 regular- season meeting, Thomas went off for 12 catches for 211 yards, highlighted by a 72-yard touchdown that he celebrated by pulling an old flip phone out of the goal post padding, as former Saints receiver Joe Horn had once done. In that game, Thomas was primarily covered by Marcus Peters. However, the Rams changed their strategy for defending Thomas in a rematch in the NFC title game, using a combination of Peters, Aqib Talib and Robey-Coleman. Thomas had just four catches for 36 yards and no touchdowns in that game.

The Saints didn't have to cover Cooper Kupp in the previous meeting, but Payton spoke highly of what the receiver adds to the Rams' offense. "He is such a smart, instinctive player, he does a lot of things well," Payton said. "It is not just in the receiving game. He is blocking. He is putting his hands on guys. ... I think he's very consistent and a very smart player. I think he brings a lot to what they do."