Man Shoots Himself in Front of Guests at Universal Studios: Police

A man shot himself in front of guests at Universal Studios Friday.

He died from an apparently self-inflicted gunshot wound near the new "Despicable Me" ride at around 2:20 p.m. The shooting occurred after a woman who works at a restaurant at the tourist spot called park security officers after seeing her ex-boyfriend within the park.

The two have a child together, but he had two restraining orders against him after incidents at the park. One was after he allegedly vandalized her car in the parking lot and another inside the park about a week ago. 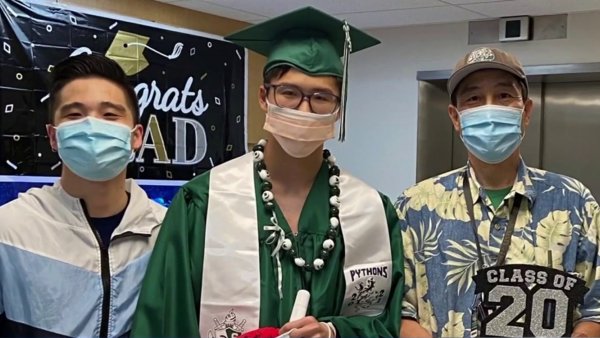 A deputy found the man in a secluded designated smoking area, but when she asked him to stand up, he instead pulled out a gun and shot himself.

"The deputy tried to talk him out of it, but after going back and forth for 30 seconds or so, he shot himself, " LASD Lt. Eddie Hernandez said. Four guests witnessed the suicide, he added.

The man was identified Saturday as Andrew Thomas Jones of Fullerton, according to LA County Coroner's investigator Kristy McCracken.

County firefighters were summoned on a medical call at 2:24 p.m. to assist the sheriff's  department.

Aerial footage showed rides in the area of the suicide had been stopped and the area was cleared of parkgoers. Because of the isolated area of the shooting, park visitors heard the shot but did not witness it.

Rosie Love was had just got off the "Minion" ride with her daughter just after 2 p.m, when she discovered the armed man was nearby.

"Everyone was hysterical and praying. We heard there was a guy with a gun near one of the water rides."

"I couldn't stop crying because I was really, really scared," her daughter Zanell Mitchell said.

Universal Studios said it was working with authorities.

"LA County Sheriff's has confirmed there was a possible suicide on our property. We are working closely with law enforcement and corporate security," a spokesperson for the theme park said in a statement.

"The safety and security of our guests is always of utmost importance. Business remains open."

No one else was injured. It's not clear if the man was an employee or a park visitor.

Universal Studios is owned by NBCUniversal, the same parent company as NBC 4.