An auto-theft suspect slammed into rental cars in a Hertz parking lot before crashing a stolen sport utility vehicle into a Chase bank at the end of a short pursuit in Anaheim.

The mayhem began around 11:30 p.m. Tuesday after a report of a vehicle being driven around the rental car parking lot and crashing into parked vehicles in the area of Lincoln Avenue and Loara Street, said Anaheim police. Responding officers heard the sound of the SUV crashing as they approached before the suspect vehicle emerged from the lot, prompting a short pursuit.

A witness said the driver crossed over a street through opposing traffic at about 40 mph before going airborne and smacking into the Chase bank in the 500 block of North Euclid Street. 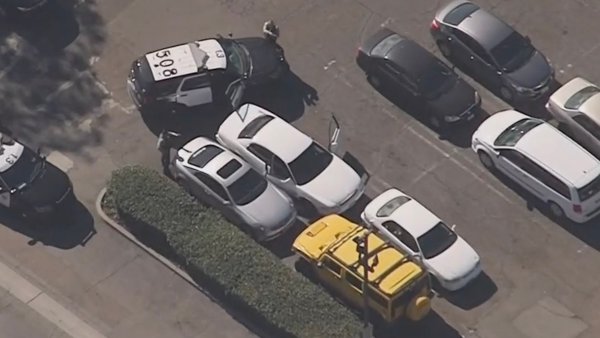 The driver ran from the SUV, but was taken into custody a short time later. He was hospitalized due to injuries suffered in the crash, but details about his condition were not immediately available.

The man was expected to be arrested on suspicion of burglary and auto theft, police said.