Tiffini Tobe, was due in court five days ago in connection with a dog that ate off its foot and had to be euthanized.

The driver who led officers on a freeway pursuit along with her six dogs had a bench warrant issued for her arrest because she didn't show up for her last court hearing, when she was to answer to a charge of keeping an animal without proper care.

Wednesday afternoon 47-year-old Tiffini Tobe of La Habra woman pleaded not guilty to driving under the influence, resisting an officer and driving without a license. The charges stem from a pursuit on the Long Beach Freeway Monday night.

The scene at the end of that chase on the 710 Freeway was chaotic. As Tobe surrendered after spinning out the car on the roadway, some of the six dogs jumped out with her and began running around the freeway, chased by CHP officers.

“I saw that Mercedes and I said ‘That looks like my brothers car,’ you know? And then I saw the dogs come out and I knew it was her,” said Richard Schoenborn, who said his brother is Tobe’s boyfriend.

Scoenborn said Tobe had been at his home that morning, asking for money.

“See, I don't really want to have too much to do with her. She's a little bit erratic … Unpredictable,” he said.

Schoenborn said tobe had been living with the dogs and his brother at a local motel. According to Tobe's cousin, the three adult females and three pups were not being bred for sale — they were her closest companions.

Police Pull Off Pursuit of Stolen Vehicle in Granada Hills 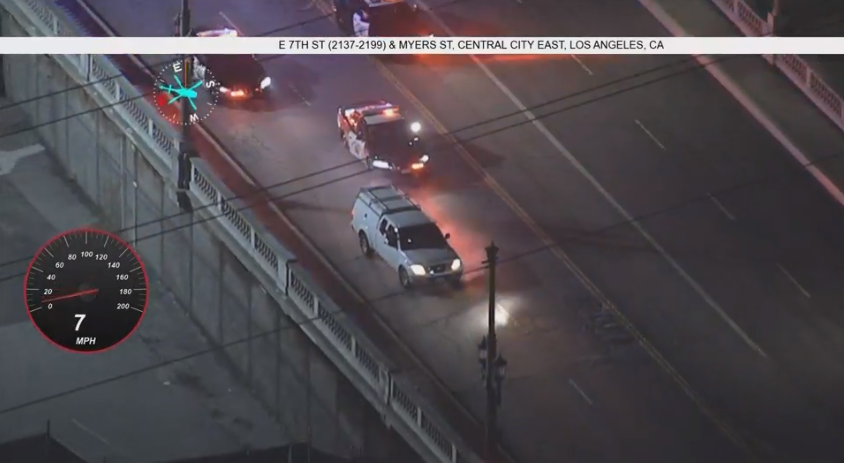 “She's really close to her dogs that's why they were in the car with her,” Tim Reed said.

But prosecutors said Tobe has a prior arrest for alleged animal abuse. Another of her dogs, Alan, had bitten off an infected foot and had to be euthanized. She was supposed to appear on that case five days ago, and when she didn’t, a bench warrant was issued for her arrest.

The dogs are currently in good health at the Long Beach animal shelter.

Tobe’s cousin said he has talked to relatives about claiming the dogs. Shelter officials said if no one does claim them they could be released for adoption in less than two weeks.

The charges against Tobe could put her behind bars for almost six years.