This year's ceremony will not have an official host.

The 27th annual Screen Actors Guild Awards will be handed out Sunday in a socially distanced format, likely solidifying various performers' claims to front-runner status ahead of Oscar night.

The late Chadwick Boseman is as close as you can get to being a sure thing in the best actor category for his role as an ambitious yet troubled young musician in “Ma Rainey's Black Bottom.”

He has already collected Golden Globe and Critics Choice wins for the role.

Boseman -- also nominated for his supporting work in “Da 5 Bloods” and as a member of the ensemble cast of that film and “Ma Rainey” -- is the first performer to receive four SAG nominations in a single year for motion picture roles.

Jamie Foxx and Maggie Smith have both had four nominations in a single year, but for a combination of film and television roles. Boseman will be squaring off in the leading actor category with Riz Ahmed of “Sound of Metal,” Anthony Hopkins of “The Father,” Gary Oldman for “Mank” and Steven Yeun for “Minari.”

We’ve been missing “California Live“ hosts Jess and Amber so we checked in on them to see how life at home with a newborn is going. Amber’s daughter, Lyla, and Jess’ son, Ian, make their first CA Live appearance getting us into the spirit of Easter as we celebrate new beginnings. By the way Jess and Amber, you’re doing a great job!

But she faces stiff competition from Frances McDormand for her work in “Nomadland,” which has been gaining awards-season traction as a best-picture favorite -- despite being left out of the SAG Awards top category of best ensemble in a motion picture.

Also vying for best actress will be Boseman's “Ma Rainey” co-star Viola Davis, Amy Adams of “Hillbilly Elegy” and Vanessa Kirby for “Pieces of a Woman.” Absent from the list is Golden Globe winner -- and Oscar nominee -- Andra Day of “The United States vs. Billie Holiday.”

Nominated along with Boseman for supporting actor are Sacha Baron Cohen for “The Trial of the Chicago 7,” Daniel Kaluuya for “Judas and the Black Messiah,” Jared Leto for “The Little Things” and Leslie Odom Jr. for “One Night in Miami.”

Olivia Colman, best known for her TV work in ‘The Crown,” is nominated for supporting actress for her work opposite Hopkins in “The Father.” The category also includes Adams' “Hillbilly Elegy” co-star Glenn Close, along with Maria Bakalova of “Borat Subsequent Moviefilm,” Yuh-Jung Youn of “Minari” and Helena Zengel of “News of the World.”

The CDC says fully vaccinated people can travel freely as long as they remain masked on planes, buses and trains. However, it is still being determined how people will prove their vaccination status. Patrick Healy reports for the NBC4 News on Friday, Apr. 2, 2021.

Competing for the best-ensemble prize -- the SAG equivalent of the Oscars' best picture -- are “Ma Rainey's Black Bottom,” “One Night in Miami”, “Da 5 Bloods,” “Minari” and “The Trial of the Chicago 7.”

“The Crown'' and “Schitt's Creek” are the top nominees overall, earning five nods each. “The Crown” and “Ozark” are both nominated for best ensemble cast in a drama series, along with AMC's “Better Call Saul,” HBO's “Lovecraft Country” and another Netflix hit, “Bridgerton.” “The Crown” won the award last year.

Three performers from “The Crown” -- Gillian Anderson, Olivia Colman and Emma Corrin -- are nominated for best actress in a drama series, while Julia Garner and Laura Linney of “Ozark” have the other two nominations.

Jason Bateman of “Ozark” and Josh O'Connor of “The Crown” are both nominated for best actor in a drama series, with Sterling K. Brown of NBC's “This is Us,” Bob Odenkirk of AMC's “Better Call Saul” and Rege-Jean Page of Netflix's “Bridgerton'' rounding out the category.

“Schitt's Creek” leads the comedy nominations, earning a nod for best ensemble cast in a comedy series, along with HBO Max's “The Flight Attendant,” Apple TV+'s “Ted Lasso,” Netflix's “Dead to Me” and Hulu's “The Great.”

The father-son team of Eugene and Daniel Levy are both nominated for best actor in a comedy series, joined by Nicholas Hoult of “The Great,” Jason Sudeikis of “Ted Lasso” and Ramy Youssef of “Ramy.”

“Schitt's Creek” also has a pair of nominations in the best actress category, with Annie Murphy and Catherine O'Hara both scoring nods.

“Dead to Me”co-stars Christina Applegate and Linda Cardellini are also nominated, with Kaley Cuoco landing the final spot for her work in “The Flight Attendant.”

Grab some popcorn and a slice, Lisa’s taking us to a very special drive-in movie night at L’Antica Pizzeria da Michele. Made famous by Julia Roberts in ‘Eat Pray Love’, the restaurant just celebrated its 150th birthday and has found a way to stay in business during the pandemic by creating an outdoor movie theater for guests in its own parking lot—you can even get your pizza delivered right to your car!

Nominated along with Taylor-Joy for best actress in a television movie or limited series are Cate Blanchett for Hulu's “Mrs. America,” Michaela Coel for HBO's “I May Destroy You,” Nicole Kidman for HBO's “The Undoing” and Kerry Washington for Hulu's “Little Fires Everywhere.”

Camp is joined in the best actor category by Daveed Diggs for Disney+'s “Hamilton,” Hugh Grant for “The Undoing,” Ethan Hawke for Showtime's “The Good Lord Bird” and Mark Ruffalo for HBO's “I Know This Much is True.”

This year's ceremony will not have an official host.

The broadcast “will highlight and expand on the show's signature ‘I Am An Actor’ stories through funny and intimate docuseries-inspired interviews, which will be woven throughout the telecast,” according to organizers. Winners were informed ahead of time and taped their acceptance speeches. 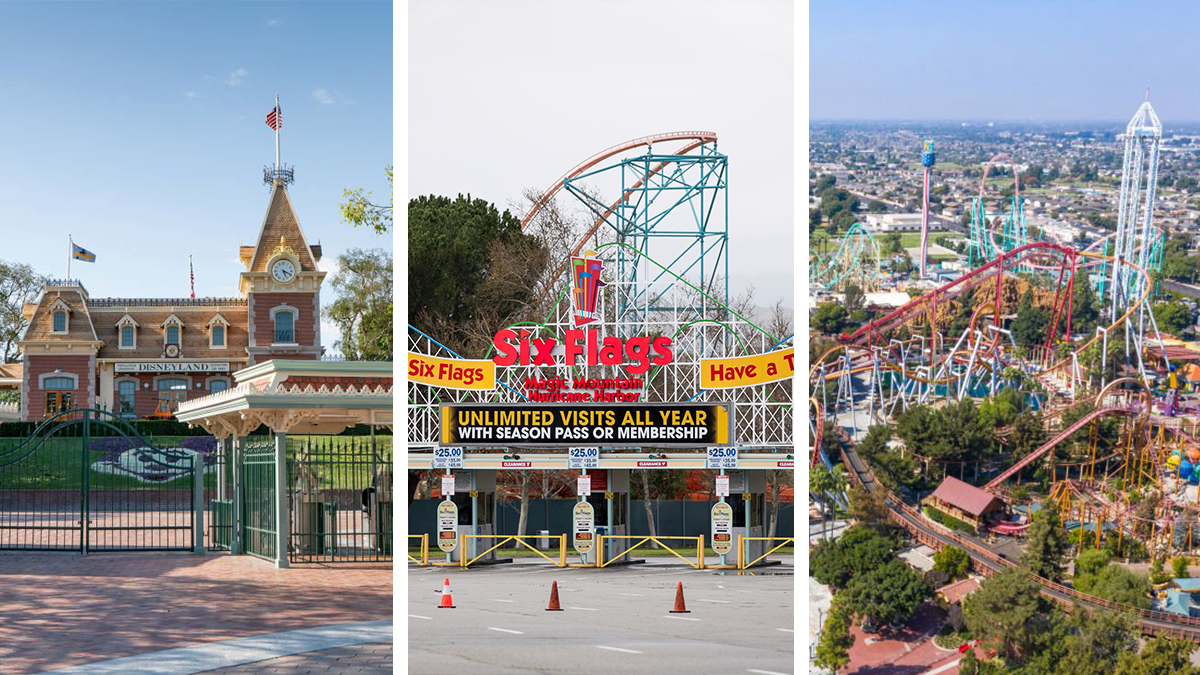 Looking for a Thrill? Here's Every Reopening Date for SoCal's Major Theme Parks