Miraculously, the driver of the crash walked away, and no other injuries were reported.

A trail of destruction was left in Hancock Park Tuesday morning, after an SUV crash near Wilshire Boulevard took out mailboxes, light posts and part of a BMW dealership building.

Miraculously, the driver walked away from the 3 a.m. solo-car crash. No other injuries were reported.

He first lost control of the vehicle around Highland Avenue, for unknown reasons.

The resulting path of destruction stretched over almost a quarter of a mile along a few blocks of the Los Angeles neighborhood.

The driver first hit a mailbox on the edge of the street, then slammed into the window of the "Beverly Hills BMW" dealership, shattering the window and damaging showroom cars inside.

On the way, the SUV he was driving sheared a fire hydrant in the road. Video taken shortly after the crash shows a small geyser shooting up into the air from the street, near the overturned car resting on its side.

One bystander, who said he works in the third floor of an office building across the street from the incident, thought the crash sounded like thunder, and went outside to check if it was raining.

"It turned out - I mean, I looked out the window, and I see it was not cloudy, it was clear," Garcia said. "I just came down and I saw the car flipped over and the paramedics and everything."

The damage to the SUV was so extensive by the end of the crash that it was difficult to ascertain what car it was. Officers from the Los Angeles Police Department later determined that the car was a Land Rover SR 4. 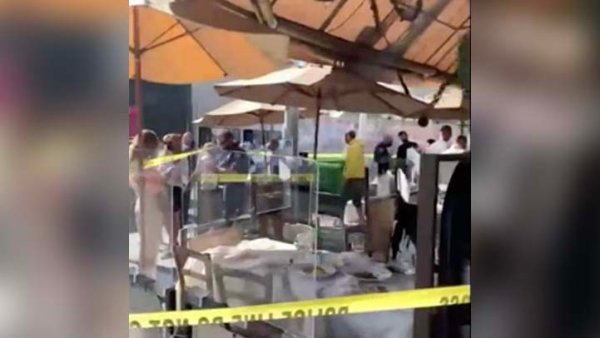 Police say they are looking into what the driver may have been under the influence of, if anything.

Officers found the driver about a block from the crash, after he miraculously walked away from the incident. He was visibly distressed, and police took him to the hospital for treatment and to see whether he was under the influence.

City crews are expected to come clean up the debris left on the street. One lane of Wilshire Avenue was blocked off for cleanup as of 6:35 a.m., but the rest of the road between La Brea Avenue and Highland Avenue had reopened by that time.