Two Weeks Later, That Foul Odor is Still in Carson

Something is rotting in the city of Carson -- and the smell has gotten so bad, the city is paying for over 200 residents to stay in hotels to get away from it.

The foul smell that has been emanating from the Dominguez Channel in Carson is still present, and has been for over two weeks.

It's now gotten so bad that more than 200 residents are staying in hotels outside the city, according to the mayor. Another 140 are on hotel waitlists.

The city has already allocated $100,000 in funds for the 700 hotel rooms they've secured for residents so they can avoid upfront costs, and to buy air purifiers for those residents who don't want to leave their homes.

LA County has mirrored those efforts, but the county requires residents to pay upfront and get reimbursed later.

"We're just coming out of a global pandemic and people don’t have the money to put out," said Jawane Hilton, Carson City Council member for District 1.

Carson leaders want Gov. Gavin Newsom to declare a state of emergency to free up FEMA funds, to help deal with the rotten-egg stench. But as of 8:30 a.m. Tuesday morning, according to Ron Eckstein of Congresswoman Nanette Barragan's office, there was no word on progress made toward that goal.

"I feel like it's getting worse, kinda," said Chris Masancay, who lives and works in Carson.

A boba shop manager, Masancay says he sprays Febreze each morning — only for the smell to come creeping back.

"It gets pretty bad, the smell," he said. "At one point, I couldn't really take it."

Officials say the odor is caused by rotting organic waste material drying out after low tide and producing hydrogen sulfide.

A strong, foul odor in the city of Carson has residents wondering what the smell is and if it’s dangerous. Lauren Coronado reports for the NBC4 News at 5 p.m. on October 9, 2021.

Those who live near the Dominguez Channel, the source of the smell, had hoped for some relief by now.

Since Friday, LA County Public Works crews have been trying to neutralize the odor by spraying a solution along the channel. But that solution isn't working fast enough, as some residents said Monday night that the smell was just as strong as before.

"The house is just real bad," said Luis Carcamo, another Carson resident. "Like someone just used the bathroom and just left it there. I'm like, no way."

Two weeks later, residents in Carson are still dealing with the terrible smell in the area. Hetty Chang reports for the NBC4 News at 11 p.m. on Oct. 18, 2021.

For some residents, the decision was easy.

"On Friday they ended up calling," said Paola Alvarez, one of the residents who left the area. "Friday night you guys are going to be relocated [to] Long Beach."

But the length of the temporary hotel stay is in limbo, at least until more decisions are made.

The Sernas chose the air filters for now, but they may soon be joining the 200 or so residents now staying in hotel rooms outside the area, courtesy of the city and county.

"It’s definitely on the table," said Alex Serna. "We are tolerating it for now, but there’s certainly nights where it’s really really bad."

And that's not just because the smell is unpleasant — it's also caused health issues.

"I called my doctor, I’m having really sharp pain," said Alyna Serna. "She’s like, 'You are in Carson, so.'"

Alyna Serna says her doctor prescribed antibiotics and an inhaler for inflammation in her lungs. 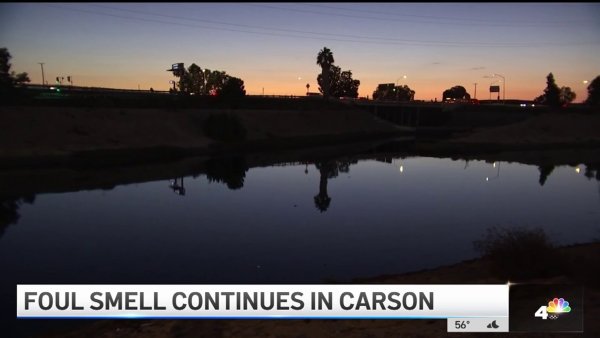 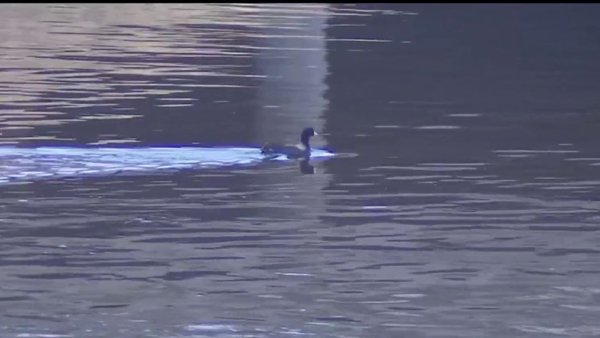 Carson has already declared the odor a public nuisance, but leaders are calling for a state of emergency declaration from the governor.

"We're looking for long term," said Lula Davis-Holmes. "We don’t want this to occur in our city again. It's affected the quality of life for our residents."

County officials said crews would return Tuesday to continue installing bubblers, which are supposed to help get oxygen into the channel. Efforts to spray deodorizer continue as well.

But they said it could take three to five days to notice, and smell, the difference.