At least 50 people were injured Thursday when a casino-bound tour bus rolled over on the Foothill (210) Freeway near the San Gabriel (605) Freeway about 20 miles east of Los Angeles in Irwindale, Calif., the CHP said.

The crash was reported just after 10 a.m. on the eastbound 210, the CHP said.

Aerial footage showed a large emergency response off the side of the freeway with firefighters tending to people on green, yellow and red triage tarps. The color-coded tarps indicate severity of injuries, with red being the most severe.

Of the 55 injured, 52 were bus passengers. The other three people injured were from other vehicles that were involved in the collision.

A majority of the injuries were minor. Some were moderate and a few suffered major injuries. All were adults, ages 60 to 80.

By Thursday night, five victims remained in the hospital, including an 86-year-old man suffering from broken ribs. 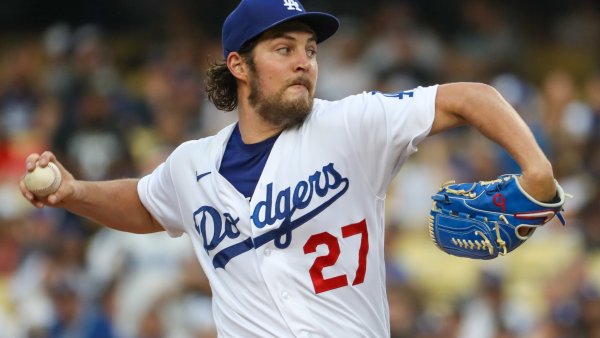 The son of one of the injured passengers told NBC4 his mother was nervous about the driver's speed before the crash.

"She told me that she was talking to the person next to her, the bus was driving a little fast and right after that, the accident happened," Steven Zhang said.

"She was in shock. She almost cannot remember anything because it happened all of a sudden."

The crash shut down a major Southern California freeway. It prompted some motorists to get out of their cars to get a look as some victims were carried away in stretchers and a heavy tow vehicle was sent in to pull the bus from a ditch.

The bus, belonging to Da Zhen out of Monterey Park, was due to arrive at the San Manuel Indian Bingo & Casino at 10:30 a.m. on a day trip, a casino spokesman said. Da Zhen is a Chinese tour bus company that frequently offers day trips to casinos in California and Las Vegas.

None of its nine buses have been involved in crashes in the last two years, according to the U.S. Transportation Department's Federal Motor Carrier Safety Administration.

But an NBC4 investigation found the company did had safety violations.

The CHP's Multidisciplinary Accident Investigation Team, which investigates all major crashes throughout the state, was leading the probe.

"It's a little early to determine whether it was driver error," said Saul Gomez, a CHP spokesman. "We are worried more about the injured people than the actual investigation itself."

Lt. Mark Garrett of the CHP said officers would conduct a "very thorough mechanical inspection" of the bus.

Traffic was backed up for miles as both sides of the freeway were shut down.