Valentina Orellana-Peralta, 14, was struck by a stray bullet when officers fired on an assault suspect. The round went through the wall and struck the girl as she was in a Burlington store dressing room.

The Los Angeles Police Department Thursday released the name of the officer involved in the shooting at a North Hollywood Burlington store that killed an assault suspect and a 14-year-old girl, who was struck by a stray bullet.

The officer was identified as Officer William Jones, who was assigned to the LAPD's North Hollywood station, according to a department statement.

The Los Angeles Police Department released no other immediate information. 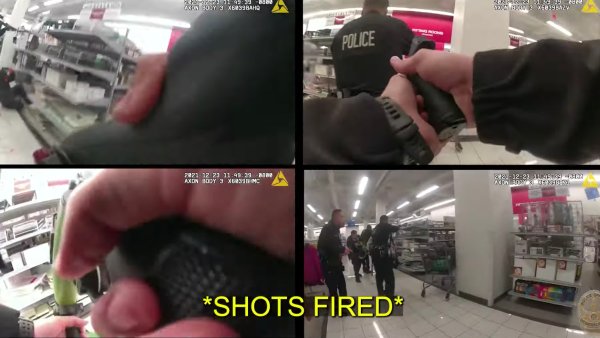 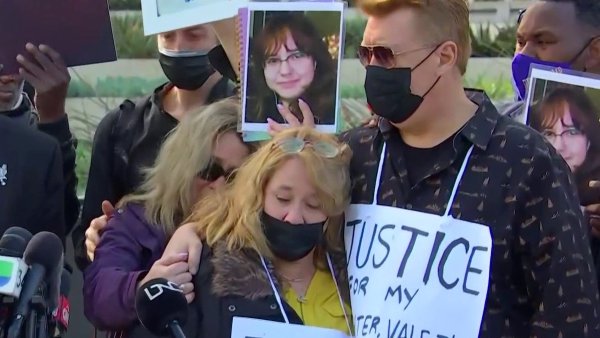 The girl was with her mother in a dressing room, trying on dresses days before Christmas, when she was struck by a police bullet that passed through a wall on the second floor of the Burlington store at 12121 Victory Blvd.

Valentina Orellana Peralta died in the arms of her mother, who said she and her daughter sat down and hugged when they heard the commotion in the store. The force of the gunshot that struck the teen and threw the two to the ground.

Los Angeles police on Monday released body-camera footage and other details of the shooting when officers responded to reports of a man assaulting people, and possibly firing shots, inside the Burlington store.

An attorney reads a statement from the mother Valentina Orellana-Peralta. Video broadcast Tuesday Dec. 28, 2021 on the NBC4 News at 11 a.m.

The narrated video released by the LAPD includes footage showing the assault suspect viciously attacking a woman on the second floor of the Burlington store, repeatedly beating her with a cable bike lock, leaving her bloodied on the floor as officers arrived.

Body-camera video captures the sound of police gunfire quickly ringing out as officers spot the suspect -- with the cable lock in his hand. More than a half-dozen officers descend on the suspect after the shots are heard, and the injured suspect is taken into custody, and later pronounced dead at the scene.

While the video shows the suspect with the cable lock in his right hand, there is no indication he is armed with a gun, and it is unclear if he advanced on any officers before the shots rang out. Police have said no gun was found at the scene.

The video released by the LAPD Monday includes audio from a series of 911 calls. In one call, a store employee tells a dispatcher a suspect is in the store attacking people with a bike lock. In another, a woman reports the sound of shots being fired in the store, saying there's "a guy with a gun.''

Another caller reports that her mother was hiding inside the store because of a man making threats. She added, "I don't know if he has a gun, I don't know what he has, but they're hiding.''

A GoFundMe page established to benefit the teen's family had raised nearly $30,000 by midday Tuesday.

One day after the LAPD released videos and 911 calls about their deadly shooting of an assault suspect and an innocent 14-year-old girl, the parents of the teen speak out. Beverly White reports for the NBC4 News at 11 p.m. on Dec. 28, 2021.

LAPD officers have shot at least 37 people — 17 of them fatally — in 2021 after another police shooting occurred on Friday, according to the Los Angeles Times. Those figures mark a dramatic rise in cases where officers shot or killed people in either of the last two years — 27 people were shot and 7 of them killed by LA police in all of 2020. In 2019, officers shot 26 people, killing 12.

The shooting recalled a July 21, 2018, confrontation in which LAPD officers accidentally shot and killed a woman at a Trader Joe’s market. Officers got into a gunfight with a man who authorities say shot his grandmother and girlfriend before leading police on a chase that ended when he crashed his car outside the market.

A police bullet killed Melyda Corado, 27, the assistant store manager, as she ran toward the store’s entrance after hearing the car crash.

The suspect, Gene Evin Atkins, took employees and shoppers hostage for three hours before surrendering, authorities said. Atkins has pleaded not guilty to the killing.