On Thursday, lawmakers in Maryland agreed to a 30-day suspension of the state's gas tax

With gas prices at record highs across the U.S., an increasing number of governors and state lawmakers are calling for the suspension of gas taxes to provide relief to motorists who are facing the prospect of even higher pump prices as the country cuts off Russian oil imports.

Proposals for a “gas tax holiday” to counter inflation had been moving slowly in Congress and state capitols before Russia invaded Ukraine, but they have gained momentum this week amid surging prices that averaged $4.33 a gallon on Friday, according to AAA.

On Thursday, Maryland Gov. Larry Hogan and legislative leaders agreed to a 30-day suspension of the state's gas tax.

“People across the country are being squeezed by surging inflation on everything from gas to groceries — Marylanders, especially our retirees, deserve and need this relief,” Hogan said in a statement.

Republican legislative leaders in Michigan and Pennsylvania announced proposals Wednesday to suspend or reduce state gas taxes. That came after the Republican governor of Georgia and Democratic governor of California both called for relief from state gas taxes Tuesday, when President Joe Biden ordered a ban on Russian oil imports.

Critics of the proposals say there is no guarantee the savings would get passed on to consumers and worry that suspending gas taxes could hurt funding for road projects. Even so, the eye-popping prices at the pump are prompting lawmakers to act.

“In the past several days, we have seen gas prices skyrocket to historic levels,” Pennsylvania Senate President Pro Tempore Jake Corman, a Republican running for governor, said in a memo seeking co-sponsors for the legislation. “We must do all that we can to address this now at the state government level and offer our support to hard-working families.”

Along with the war in Ukraine and America's ban on Russian oil imports, the federal gas tax is also playing a role in the surging gas prices in the Philadelphia region. NBC10's Lauren Mayk shows us the efforts from Pennsylvania leaders to change that.

Pennsylvania’s 57.6-cent-a-gallon gas tax is the highest in the nation, just ahead of California's. Corman said he is introducing legislation for a roughly one-third reduction through the rest of the year. The lost gas tax revenue would be offset by directing $500 million of federal COVID-19 relief aid to state police and issuing $650 million in bonds to ensure infrastructure projects remain funded.

Legislation pending in both the U.S. House and U.S. Senate also would offset lost revenue from a gas tax suspension by transferring an equal amount of general fund dollars to the accounts that fund state highway and public transit programs. The legislation is opposed by groups that advocate for road and bridge funding. They fear a tax suspension would set a poor precedent and become politically difficult to restore, if politicians are cast as supporting a tax hike when it kicks back in.

The potential for lost infrastructure funding has been one of the biggest obstacles to those seeking to suspend or reduce gas taxes, but some state officials say they can afford the financial hit. Many states ended their 2021 fiscal years with record cash balances due to an influx of federal pandemic aid and a resurgent economy that yielded greater income and sales tax revenue than expected.

Suspending Michigan’s 27.2-cent-a-gallon fuel tax from April through September would cost about $725 million. The bill passed the GOP-controlled House on Wednesday and now goes to the state Senate, also controlled by Republicans. The office of Michigan Gov. Gretchen Whitmer, a Democrat, said it could hamper road repairs.

“Michigan has billions of dollars in surplus revenue available,” House Speaker Jason Wentworth said in statement Wednesday. “The solution here isn’t complicated. Republicans are going to take action today and put a real plan on the governor’s desk to actually lower the cost at the pump.”

Though average gas prices are at record levels, they are not yet the highest that Americans have paid when adjusted for inflation. The previous record high of $4.10 a gallon in July 2008 would be equal to about $5.24 in today's dollars. 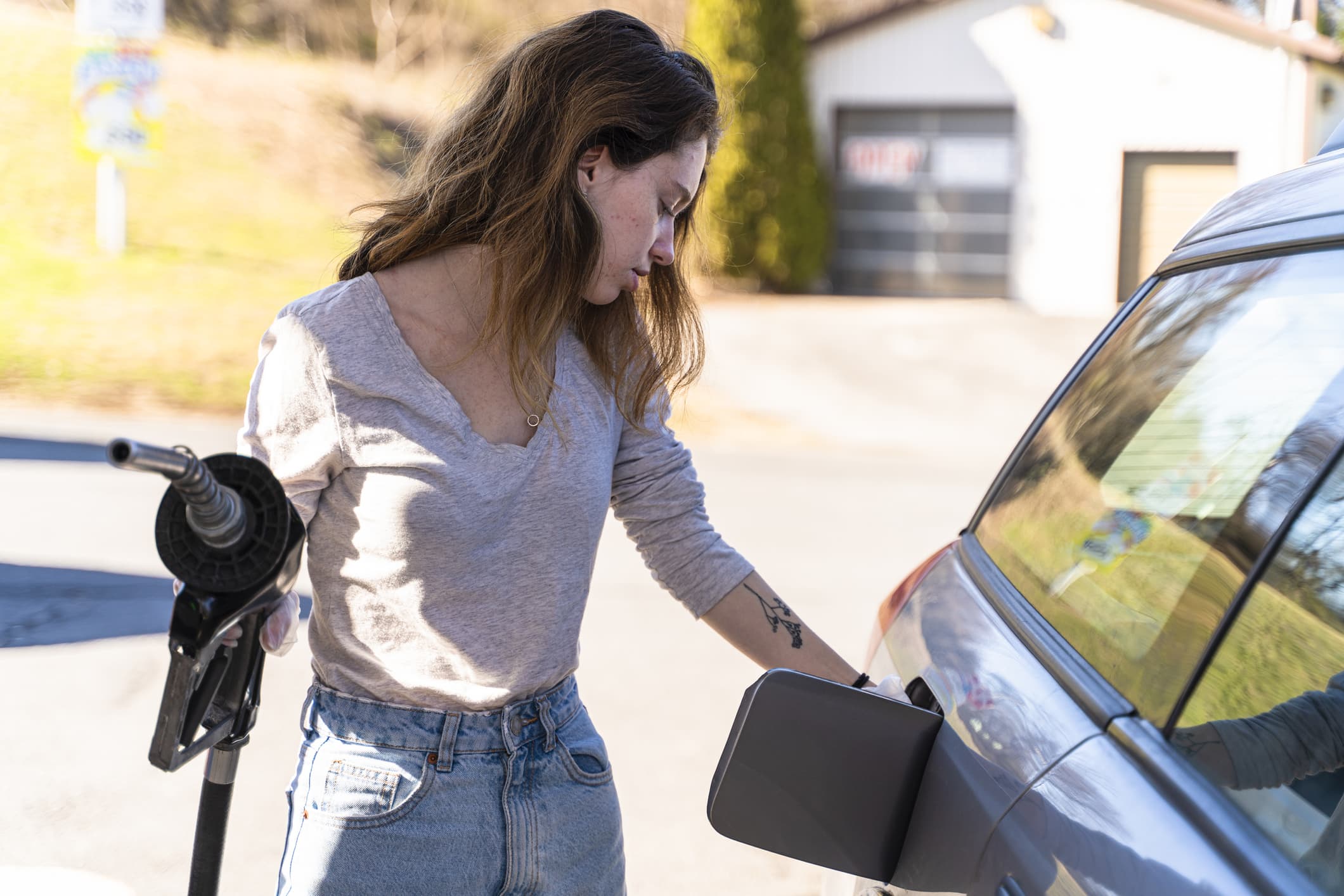 Proposals to suspend gas taxes are based on an assumption that the savings would be passed on to consumers.

“Money saved at the pump translates into dollars back in consumers’ pockets for groceries, childcare, rent, and more,” the six Democratic governors wrote in their letter Tuesday to Democratic and Republican congressional leaders.

But transportation advocates say that because of other factors affecting gas prices, the full amount of tax cuts may not be reflected at the pump.

On average, only about one-third of the value of previous gas tax cuts or tax increases were passed on to consumers, according to a 2020 report from the American Road & Transportation Builders Association that analyzed 113 state gas tax changes enacted over several years. That's because retail gas prices are influenced by complex factors, including the price of crude oil and supply-and-demand pressures.

"The real problem with this approach at both the federal and the state level is that there’s no way to ensure that the people will see this savings when they go to the gas pump to fill up their cars, their SUVs and trucks,” said Jim Tymon, executive director of the American Association of State Highway and Transportation Officials.

Last year, Georgia Gov. Brian Kempsuspended state motor fuel taxes for several days to offset increasing prices after a computer hack led to the shutdown of a key pipeline that carries fuel to much of Georgia.

Kemp on Tuesday said he again wants to suspend the state's 29.1-cent-a-gallon gas tax because of rising prices, though details remain to be worked out in legislation introduced in the General Assembly.

Gas prices across the country have surged in recent weeks, with San Francisco recently becoming the first U.S. city where gas costs over $5 a gallon on average. NBCLX storyteller Cody Broadway breaks down why prices are higher in California and whether drivers will have relief at the pump anytime soon.

California Gov. Gavin Newsom also renewed a call to provide relief from rising gas prices during his State of the State address Tuesday, after a previous proposal gained little traction in the Democratic-led legislature. The average price for a gallon of gas in California reached $5.72 on Friday — the highest nationally, according to AAA.

After Newsom's speech, California Senate President Pro Tem Toni Atkins and Assembly Speaker Anthony Rendon issued a joint statement saying they plan to pursue tax relief from the general fund instead of “a small cut to the gas tax that might not get passed on to consumers.”

Virginia lawmakers also were negotiating this week whether to suspend a recent gas-tax hike for one year. The proposal was a key campaign pledge of Gov. Glenn Youngkin, a Republican elected last November. The Republican-controlled House included the temporary 5-cent gasoline tax cut in its budget proposal, but the Democrat-controlled Senate did not.

Before Russia's invasion of Ukraine, Republican Gov. Ron DeSantis of Florida had proposed a five-month pause on the state’s gas tax this summer as part of a broader package of tax relief. Democratic Gov. J.B. Pritzker of Illinois also had proposed to halt an automatic 2.2-cent increase in the state's motor fuel tax as part of a broader tax-cut plan.

Lawmakers in other states — including Minnesota, New York and Ohio — also have proposed to suspend or roll back gas taxes. A day after Russia invaded Ukraine, Missouri state Rep. Andrew Schwadron, a Republican, filed legislation to suspend the state's motor fuel taxes for six months, citing an emergency to protect consumers from rising prices.

"The quickest way that we could provide that relief would be by temporarily suspending that gas tax," he said.

Associated Press writers from across the U.S. contributed to this report.