Evidence collected during the Navy's investigation is enough to direct a "preliminary hearing in accordance with due process under the military justice system," according to the Navy

Charges have been brought forth against a sailor in response to evidence found during the criminal investigation into the fire on the USS Bonhomme Richard docked by San Diego last year, according to a Navy spokesman.

U.S. Third Fleet Public Affairs Officer Navy Cmdr. Sean Robertson said there was enough evidence to direct a "preliminary hearing in accordance with due process under the military justice system."

The sailor was a member of the Bonhomme Richard's crew at the time and "is accused of starting the fire," Robertson said in a news release sent out on Wednesday afternoon.

The fire was one of the worst to rip through a U.S. warship outside of combat in recent years, according to Navy officials.

"Vice Adm. Steve Koehler, commander, U.S. 3rd Fleet, is considering court-martial charges and has directed a preliminary hearing, at which an impartial hearing officer will make determinations and recommendations required by the UCMJ prior to any further trial proceedings – including whether or not there is probable cause to believe an offense has been committed and to offer a recommendation as to the disposition of the case," Roberston said.

The identity of the sailor was not released, though Robertson did tell NBC San Diego that the accused is a Seaman Apprentice Sailor E2. The sailor's hearing is not yet scheduled, but it will likely not take place for another week at least, the spokesman said. 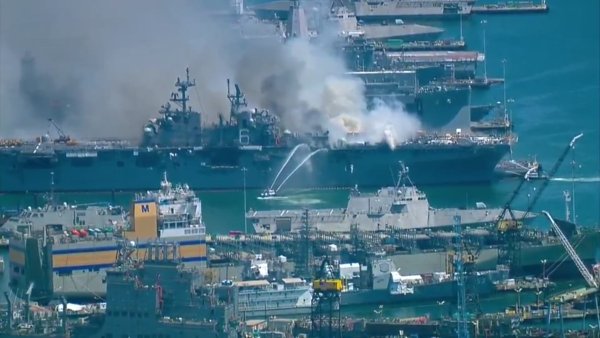 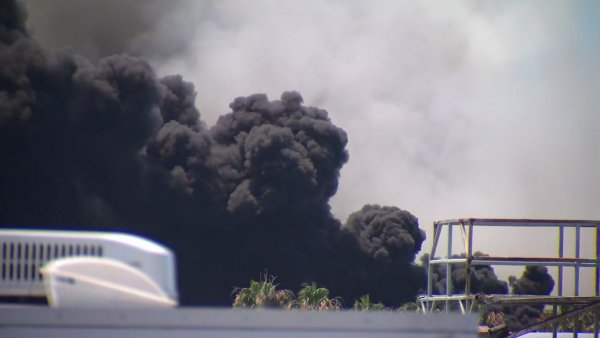 The fire began in the ship's lower storage area, where cardboard boxes, rags and other maintenance supplies were stored. But winds coming off the San Diego Bay whipped up the flames and the flames spread up the elevator shafts and exhaust stacks. The four-day inferno fought by hundreds of firefighters, including multiple water-dropping helicopters.

Then two explosions — one heard as far as 13 miles away — caused it to grow even bigger.

About 160 sailors were aboard the ship at the time of the fire and the entire crew was able to disembark; each sailor was later accounted for

About 160 sailors were aboard the ship at the time the fire was sparked and the were able to disembark. At least 57 people — 34 sailors and 23 civilians — were hospitalized with minor injuries, Naval Surface Forces said last year.

After the fire, the amphibious assault ship was left with extensive structural, electrical and mechanical damage and was later scrapped, costing the Navy billions of dollars.

Amphibious assault ships are among the few in the U.S. fleet that can act as a mini aircraft carrier.

The Bonhomme Richard had been nearing the end of a two-year upgrade estimated to cost $250 million when the fire broke out on July 12, 2020. The 840-foot vessel had been docked at Naval Base San Diego while undergoing the upgrade.

In April, the ship was decommissioned in a private ceremony at Naval Base San Diego.

The USS Bonhomme Richard was decommissioned after a fire tore through the ship.

The Associated Press contributed to this report -- Ed.