Former Minneapolis officer Derek Chauvin, 45, is charged with murder and manslaughter in George Floyd’s death on May 25

The chief medical examiner who ruled George Floyd’s death a homicide testified Friday that the way police held him down and compressed his neck “was just more than Mr. Floyd could take,” given the condition of his heart.

Dr. Andrew Baker, the Hennepin County medical examiner, took the stand at the murder trial of former Officer Derek Chauvin for pressing his knee on or close to Floyd’s neck for what prosecutors say was as much as 9 1/2 minutes as the 46-year-old Black man lay on the pavement last May.

Asked about his finding that police “subdual, restraint and neck compression” caused Floyd's heart to stop, Baker said that Floyd had severe underlying heart disease and an enlarged heart that needed more oxygen than normal to function, as well as narrowing of two heart arteries.

Baker said being involved in a scuffle raises adrenaline, which asks the heart to beat even faster and supply more oxygen.

“And in my opinion, the law enforcement subdual, restraint and the neck compression was just more than Mr. Floyd could take by virtue of that, those heart conditions,” the medical examiner said.

Other medical experts, including a leading lung specialist, have gone further, testifying that Floyd died of asphyxia — or insufficient oxygen — because his breathing was constricted as he lay on his stomach with his hands cuffed behind his back, his face jammed against the ground and Chauvin's knee on his neck.

Baker has not ruled asphyxiation as a cause of Floyd’s death. And at one point, he said he is not an expert on lack of oxygen because he doesn’t treat living people, and he would defer certain questions to experts on breathing.

Baker also said that based on his viewing of the video, he believed Chauvin’s knee was “primarily on the back, or the side or the area in between on Mr. Floyd’s neck.” And he said that in his opinion, the placement of Chauvin’s knee would not have cut off Floyd’s airway.

Chauvin, 45, is charged with murder and manslaughter in Floyd’s death May 25. Floyd was arrested outside a neighborhood market after being accused of trying to pass a counterfeit $20 bill.

Bystander video of Floyd crying that he couldn’t breathe as onlookers yelled at the white officer to get off him sparked protests and scattered violence around the U.S.

Chauvin attorney Eric Nelson has argued that the now-fired officer did what he was trained to do and that Floyd's illegal drug use and underlying health conditions killed him. An autopsy found fentanyl and methamphetamine in Floyd's system.

Ted Sampsell-Jones, a law professor at Mitchell Hamline School of Law in St. Paul, Minnesota, said evidence about Floyd’s cause of death is shaping up to be the biggest weakness for prosecutors. He said that with Baker’s testimony, the jury is starting to see that the prosecution has been forced to distance itself from its own medical examiner.

“It could possibly raise a reasonable doubt about cause of death," he said.

However, Sampsell-Jones said the legal standard for establishing causation is quite low. The state has to show only that Chauvin’s conduct was a substantial contributing cause.

“If the state had to show that Chauvin’s conduct was the sole or even primary cause of death, the case would be in real trouble,” he said.

In his testimony, Baker said that neither Floyd’s heart problems nor drugs caused his death. Under cross-examination, though, he agreed with Nelson that those factors “played a role” in the death.

Dr. Martin Tobin, world-renowned pulmonologist, testified at the murder trial of former police officer Derek Chauvin that overall health was not a factor in the death of George Floyd. “Any healthy person subjected to what Mr. Floyd was subjected to would have died as a result of what he was subjected to.”

A medical expert who testified Thursday said a healthy person subjected to what Floyd endured would also have died.

Nelson asked Baker whether he has certified deaths by fentanyl overdose at levels lower than that seen in Floyd’s blood, and Baker said yes. But Baker also noted that levels of fentanyl must be considered in the context of how long someone had used the drug, any tolerance built up to it, and what other substances may be involved.

The medical examiner said that he did not watch the harrowing video of the arrest before examining Floyd so that he would not be unduly influenced by what he saw.

“I did not want to bias my exam by going in with any preconceived notions that might lead me down one pathway or another," he said.

Other medical experts called as prosecution witnesses have likewise blamed Floyd’s death on the way he was pinned down on the ground.

Dr. Lindsey Thomas, a forensic pathologist who retired in 2017 from the Hennepin County Medical Examiner’s Office and did not work on Floyd’s case, testified earlier Friday that she agreed with Baker’s findings, but appeared to go further, saying the “primary mechanism of death” was insufficient oxygen.

She said she reached that conclusion mostly from video that showed Floyd struggling to breathe.

The emergency room doctor who pronounced George Floyd dead, Dr. Brandford Langenfeld, said Monday that "oxygen deficiency," commonly referred to as asphyxia, was most likely the cause of death. This challenges the defense’s argument that Floyd’s death was caused by a heart attack related to drug use, as opposed to Derek Chauvin’s use of force.

During cross-examination, Nelson noted that Floyd’s bigger heart needed more blood and was working hard in a moment of stress and adrenaline, and that one of his arteries had a 90% blockage.

The defense attorney pressed Thomas by posing a hypothetical question.

“Let’s assume you found Mr. Floyd dead in his residence. No police involvement, no drugs, right? The only thing you found would be these facts about his heart. What would you conclude to be the cause of death?” Nelson asked.

“In that very narrow set of circumstances, I would probably conclude that the cause of death was his heart disease,” Thomas replied.

In response to another hypothetical posed by Nelson, she agreed that she would certify Floyd’s death as a drug overdose if there were no other explanations.

“Aren’t those questions a lot like asking, ‘Mrs. Lincoln, if we take John Wilkes Booth out of this ...'” Blackwell began, before Nelson objected.

For the first time, a seat designated for Chauvin’s family was occupied Friday, by a woman. She wasn’t immediately identified. Chauvin’s marriage ended in divorce in the months after Floyd’s death.

Also on Friday, Judge Peter Cahill called in a juror and questioned her about whether she had been subject to any outside influences. She replied that she briefly saw TV coverage with the sound off and said that her mother-in-law had texted her, “Looks like it was a bad day” but that she didn’t reply.

The judge allowed her to remain on the jury. 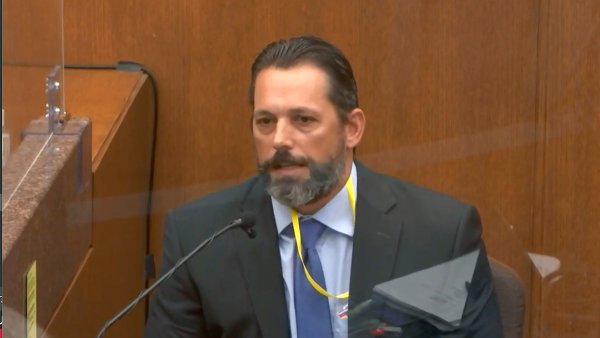 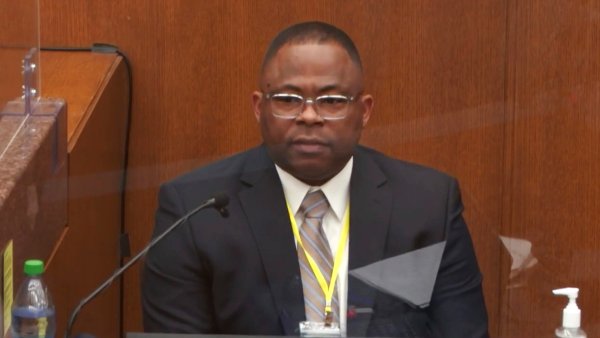