Ingenuity has already made three successful flights, but an ambitious fourth attempt failed to get off the Martian surface.

Mars mission team members are trying to figure out what happens next after the tiny experimental helicopter on the Red Planet failed to get off the ground during its fourth attempt to fly.

Jet Propulsion Laboratory tweeted that the history-making Ingenuity helicopter on "didn't get off the ground'' Thursday. Mission managers assessing data from the rotorcraft to determine the next steps later said the helicopter is "safe and health," but apparently did not enter flight mode -- considered a possible outcome. 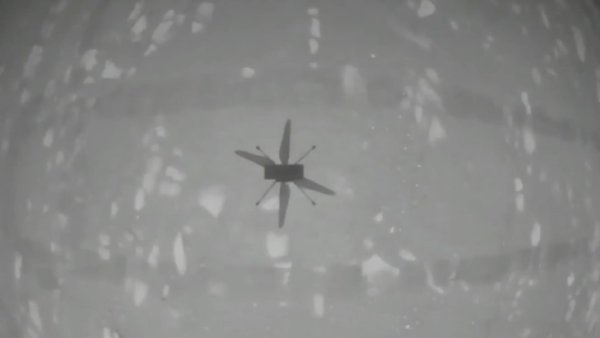 "Aim high, and fly, fly again. The #MarsHelicopter's ambitious fourth flight didn't get off the ground, but the team is assessing the data and will aim to try again soon. We'll keep you posted," SoCal-based JPL tweeted.

The little helicopter has already made three successful flights on Mars, something that wasn't guaranteed months ago when Ingenuity hitched a ride to Mars on the belly of the rover Perseverance. Managers were planning to push the performance envelope during Thursday's flight.

The flight from Wright Brothers Field -- the name given to the helicopter's base on Mars -- was scheduled to occur at 7:12 a.m. California time. Data from the flight wasn't expected back at JPL until roughly three hours later, at 10:21 a.m. It was just before noon that JPL announced the flight had not occurred.

The fourth flight was expected to see Ingenuity climb to a height of 16 feet, then fly south over rocks, sand ripples, and small impact craters for 276 feet. The helicopter's downward-facing camera was then expected to begin snapping photos every four feet, until it reached a distance of 436 feet from its starting point. Ingenuity was then programmed to stop, hover and return to Wright Brothers Field.

"To achieve the distance necessary for this scouting flight, we're going to break our own Mars records set during flight three,'' Johnny Lam, Ingenuity's backup pilot at JPL, said prior to the attempt. ``We're upping the time airborne from 80 seconds to 117, increasing our max airspeed from 2 meters per second to 3.5, and more than doubling our total range.'

NASA and JPL officials are expected to hold a media briefing Friday to discuss future plans for Ingenuity.