Prime Minister Boris Johnson, whose support for Brexit helped push the country out of the EU, called it “an amazing moment for this country"

A steady trickle of trucks rolled off ferries and trains on either side of the English Channel on Friday, a quiet New Year’s Day after a seismic overnight shift in relations between the European Union and Britain.

The busy goods route between southeast England and northwest France is on the front line of changes now that the U.K. has fully left the economic embrace of the 27-nation bloc, the final stage of Brexit.

“For the majority of trucks they won’t even notice the difference,” said John Keefe, spokesman for Eurotunnel, the railway tunnel that carries vehicles under the Channel. “There was always the risk that if this happened at a busy time then we could run into some difficulties, but it’s happening overnight on a bank holiday and a long weekend.”

Britain left the European bloc’s vast single market for people, goods and services at 11 p.m. London time, midnight in Brussels, on Thursday, in the biggest single economic change the country has experienced since World War II. A new U.K.-EU trade deal will bring new restrictions and red tape, but for British Brexit supporters, it means reclaiming national independence from the EU and its web of rules.

Prime Minister Boris Johnson, whose support for Brexit helped push the country out of the EU, called it “an amazing moment for this country.”

“We have our freedom in our hands, and it is up to us to make the most of it,” he said in a New Year’s video message.

The break comes 11 months after a political Brexit that left the two sides in the limbo of a “transition period” in which EU rights and rules continued to apply to Britain.

The trade agreement sealed on Christmas Eve after months of tense negotiations ensures that Britain and the EU can continue to buy and sell goods without tariffs or quotas. But companies face sheaves of new costs and paperwork, including customs declarations and border checks.

The English Channel port of Dover and the Eurotunnel braced for delays as the new measures were introduced.

The vital supply route was snarled for days after France closed its border to U.K. truckers for 48 hours last week in response to a fast-spreading variant of the virus identified in England.

The pandemic and a holiday weekend meant cross-Channel traffic was light on Friday. Britain has also delayed imposing full customs checks for several months so that companies can adjust.

The British government insisted that “the border systems and infrastructure we need are in place, and we are ready for the U.K.’s new start.” 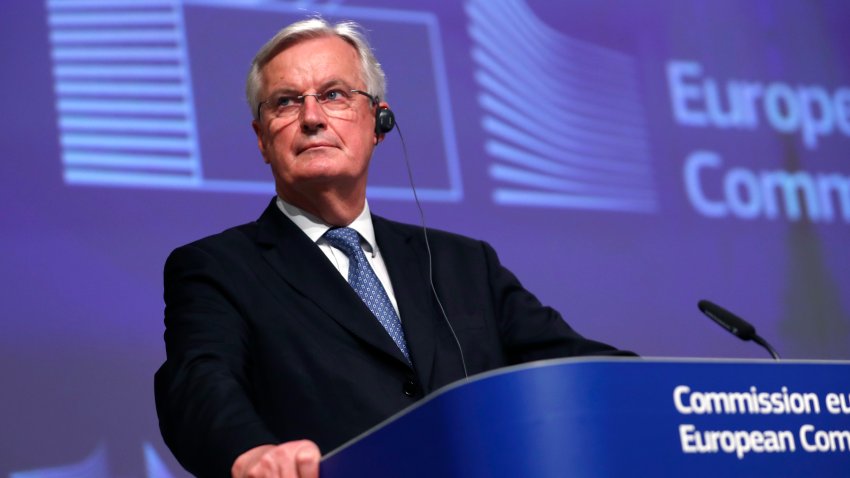 New checks were also in place across the Irish Sea. A dozen trucks rolled off the first ferry to arrive at Dublin Port from Wales before dawn, clearing the new customs inspections without delays.

“We have avoided the kind of dramatic disruption of a no trade deal Brexit, but that doesn’t mean that things aren’t changing very fundamentally, because they are,” said Irish Foreign Minister Simon Coveney.

“We’re now going to see the 80 billion euros ($97 billion) worth of trade across the Irish Sea between Britain and Ireland disrupted by an awful lot more checks and declarations, and bureaucracy and paperwork, and cost and delay.”

In Scotland, which voted strongly in 2016 to remain, Brexit has bolstered support for separation from the U.K. The country’s pro-independence First Minister Nicola Sturgeon tweeted: “Scotland will be back soon, Europe. Keep the light on.”

“The United Kingdom remains our neighbor but also our friend and ally,” said French President Emmanuel Macron in his New Year’s address to the nation. “This choice of leaving Europe, this Brexit, was the child of European malaise and lots of lies and false promises.”

Jo Kearney in Folkestone, England, contributed to this story.