"The Ellen DeGeneres Show" had Cheer star Jerry Harris on the 2020 Oscars red carpet where he talked to everybody from Billie Ellish and Regina King to Kathy Bates and Rene Zellweger, and just about everybody who stopped for him knew who he was and was more starstruck to see him than the other way around.

"Jerry. Jerry. Jerry, this is what I want to say to you: You've got this! You can do this Jerry," Dern said to the college student. "Because my daughter was giving me some mat talk as I was driving in the car. And we love you and we love your big, beautiful heart."

Dern went on to win her first Oscar. Just saying.

What the Stars of Netflix's Cheer Are Up to Today

Lin-Manuel Miranda freaked out. Greta Gerwig had a moment. "I feel like I manifested you in front of me," Gerwig told him. Ellish and Bates tried on his Daytona championship ring. "I fell in love with you! I just saw the whole show," Bates said bowing to the 20-year-old.

Al Pacino told him he won an Oscar in 1993, before Harris was born.

Take a look at the biggest moments from the 2020 Academy Awards. This year’s Oscars were held at the Dolby Theatre in Hollywood, California.

Rebel Wilson and Harris even did a cheer. Idina Menzel requested some mat talk for her performance of "Into the Unknown."

It didn't stop on the Oscars red carpet. According to The Los Angeles Times, Harris was the most popular person at Vanity Fair's annual bash.

Back in the talk show studio, Ellen DeGeneres gifted Harris with a scrapbook from his time on the carpet, complete with photos of him interviewing many Oscar winners, and a special $10,000 gift from Shutterfly.

"For loans, for joy, everything you do," DeGeneres told him.

Harris, for once, was speechless.

Season one of "Cheer" is now streaming on Netflix.

A Breakdown of the Gowns, Bling and Beauty From the Oscars 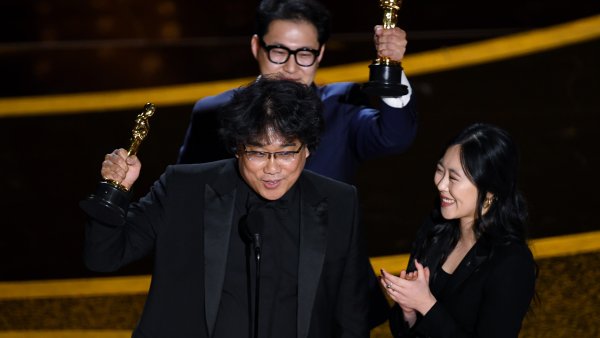