Biden unveiled a framework for the package last week, a sizable investment in social service programs and climate change strategies

Senate Majority Leader Chuck Schumer announced the deal, which is one of the few remaining provisions that needed to be resolved in Biden's big package as the party moves closer to wrapping up negotiations. Schumer acknowledged it's not as sweeping as Democrats had hoped for, but a compromise struck with one key holdout Democrat, Sen. Kyrsten Sinema of Arizona.

And Biden sounded upbeat about winning overall backing from another holdout, Democratic Sen. Joe Manchin of West Virginia, who threw the president's plan in flux this week by refusing to endorse it.

"He will vote for this,” Biden said of Manchin during remarks at a global climate summit in Scotland. 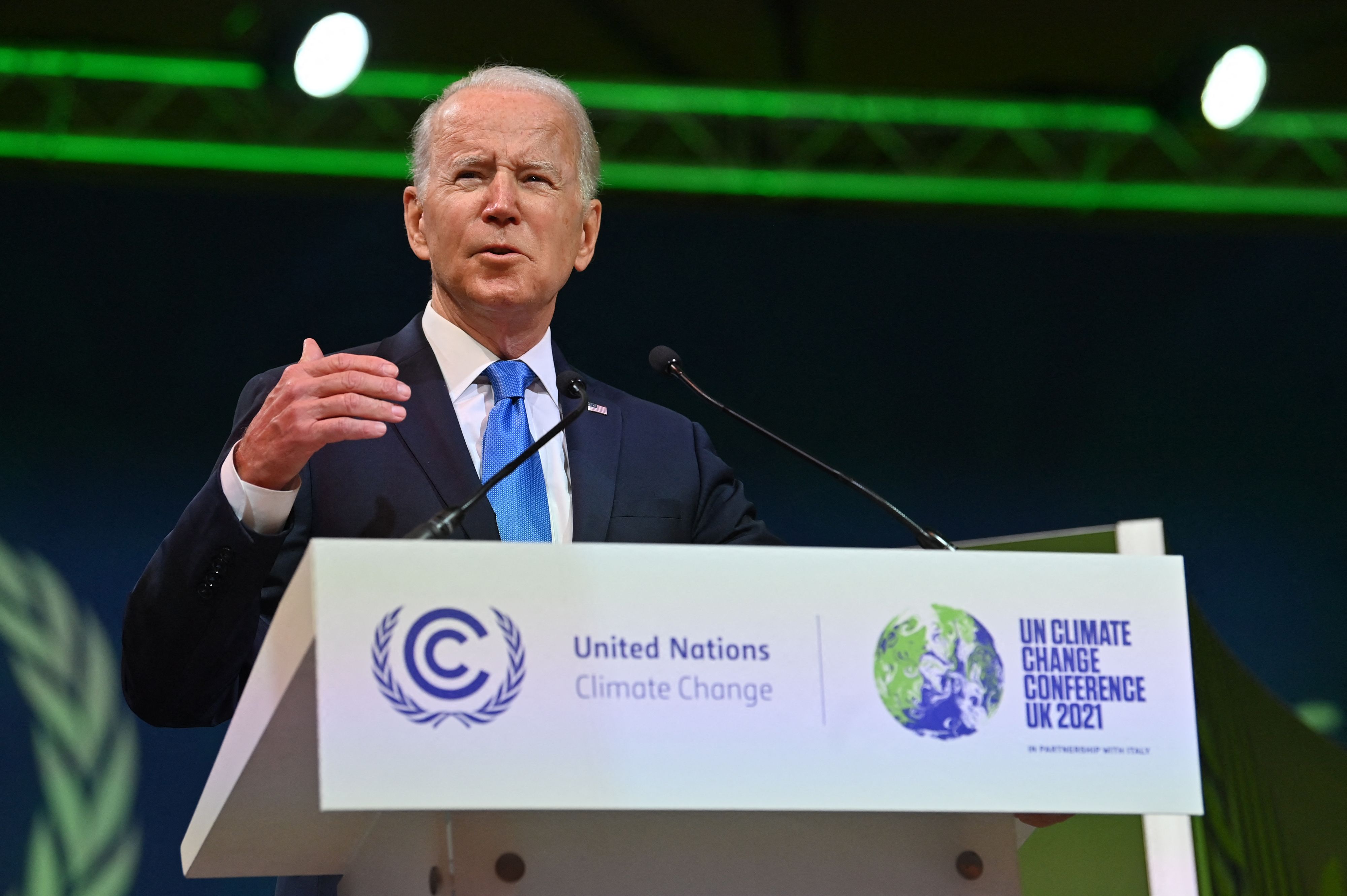 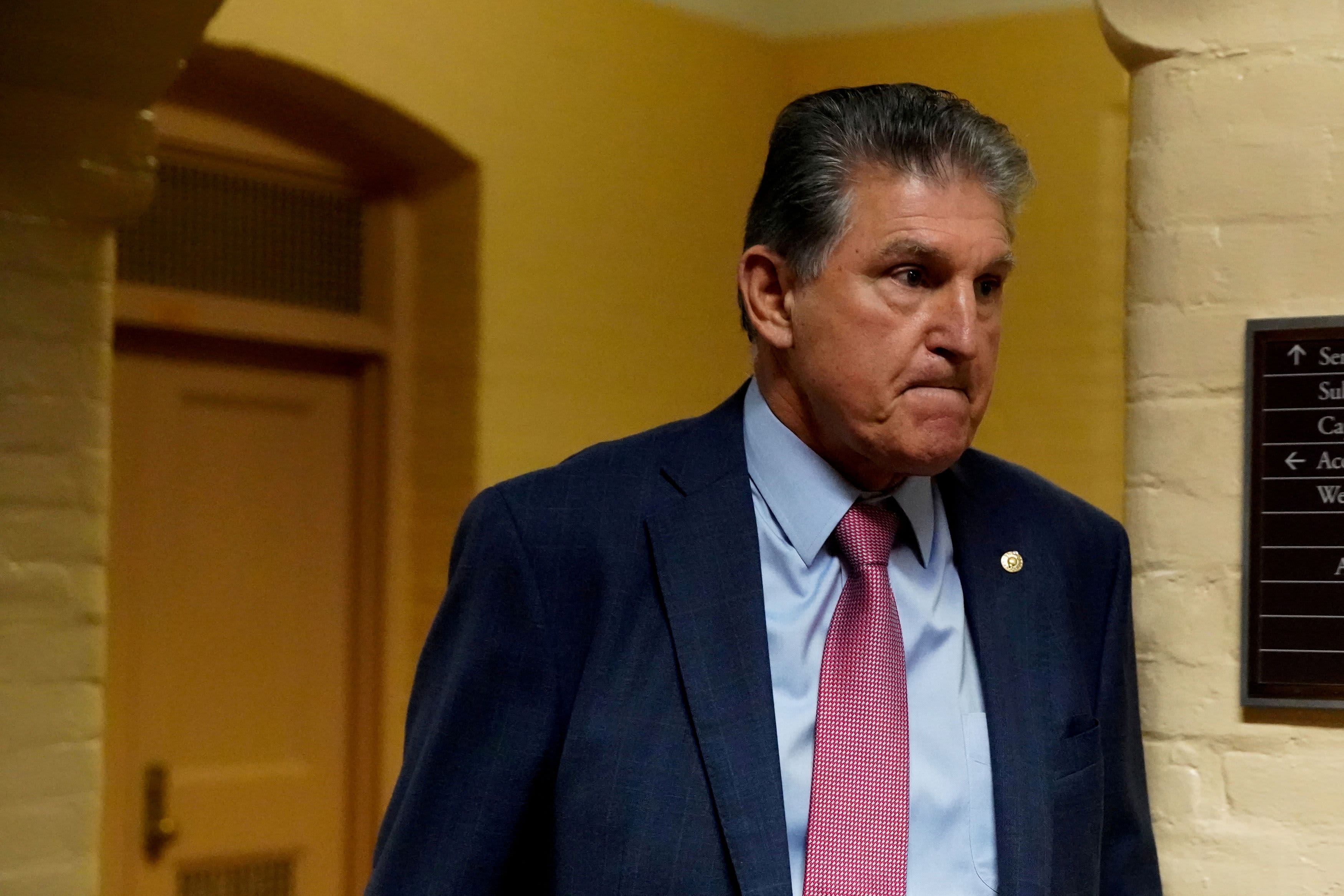 Without divulging their private conversations, Biden said the senator was looking at the fine print of the legislation. “But I think we’ll get there,” the president said.

Democrats are rushing to overcome party battles and finish a final draft of Biden's plan. House Speaker Nancy Pelosi had hoped to wrap up the draft and pave the way for voting as soon as Thursday on the overall package, according to her remarks at a closed-door caucus meeting. But no votes have been scheduled.

The stakes are stark as Democrats are warily watching governors' races Tuesday in two states — Virginia and New Jersey — that are seen as bellwethers in the mood of the electorate. Democrats are struggling to hold states that recently favored the party over Republicans.

Fingers are pointing all around as negotiations over Biden's ambitious package have dragged on, with Democrats unable to pass the bill. Progressive and centrist lawmakers, particularly Manchin and Sinema, have fought over details of the sprawling 1,600-page package.

“I think what most people think: The situation is like, ‘Okay, we elected Democrats to have the majority in the House, the Senate and the presidency. They should be getting things done,’” Democratic Rep. Elaine Luria, who represents a swing district in Virginia, told reporters at the Capitol.

Still, Democrats shored up at least one unsettled provision — reviving a prescription drug deal that had been scrapped from Biden's framework in a blow to Democrats' years-long effort to reduce pharmaceutical costs by allowing Medicare to negotiate for lower prices.

“It’s not everything we all want. Many of us would have wanted to go much further, but it’s a big step in helping the American people deal with the price of drugs,” Schumer said at the Capitol.

Schumer said that for the first time, Medicare will be able to negotiate prescription drug prices in its Part B and Part D programs. The $2,000 cap on out-of-pocket costs would benefit those older Americans with the Part D prescription drug benefit, who number some 48 million, Democrats said.

And there would be "a new monthly cap on the price of insulin, and an ‘inflation’ rebate policy to protect consumers from egregious annual increases in prices,” Schumer said. The insulin prices would fall from as high as $600 a dose to $35.

The penalties on drug manufacturers for raising prices beyond the inflation rate begin this year.

AARP, the powerful organization for older Americans, signaled support as it waits for details. CEO Jo Ann Jenkins said in a statement there was “no greater issue affecting the pocketbooks of seniors on Medicare than the ever-increasing costs of prescription drugs.”

Pfizer says the child-sized doses of its COVID-19 vaccine are more than 90% effective in kids 5-11 years old. The Food and Drug Administration will soon review the data and make a recommendation.

But Pharmaceutical Research and Manufacturers of America president and CEO Stephen J. Ubl said the proposal “gives the government the power to dictate how much a medicine is worth.” The pharmaceutical lobby warned it “threatens innovation.”

On another issue, Democrats neared agreement on a plan to do away with the $10,000 limit on state and local tax deductions that particularly hits New York, California and other high-tax states and was enacted as part of the Trump-era 2017 tax plan.

While repeal of the so-called SALT deduction cap is a priority for several northeastern state lawmakers, progressives want to prevent the super-wealthy from benefiting. Under an emerging plan, the cap would be repealed from 2021 to 2025, but reinstated from 2027 to 2031, according to a person who requested anonymity to discuss the private talks.

Despite efforts to drive momentum, Manchin interjected fresh uncertainty Monday by publicly wavering again over whether or not he would support the party's ambitious effort.

The conservative West Virginia Democrat has been an unreliable partner for Biden's big vision, raising questions and concerns about the president's plans expand health care, child care and other social services and tackle climate change.

A group of House Democrats huddled with Manchin privately Tuesday at the Senate. Manchin's outlook angered some lawmakers who have tired of his protests but energized others, particularly progressives, to speed up the vote. He showed no signs of relenting Tuesday, despite widespread criticism over the power of a single senator to hold up the party's signature domestic priority.

“It's going to be a while,” Manchin said in brief comments Tuesday at the Capitol.

Rep. Pramila Jayapal, D-Wash., the leader of the progressive caucus said, “I don’t know what Sen. Manchin is thinking, but we are going to pass both bills through the House and we are going to deliver transformative change to the people.”

With Republicans staunchly opposed and no votes to spare, Democrats have been trying to unite progressive and centrist lawmakers around Biden’s vision.

“I think we're going to pass both bills — hopeful this week if we get the differences that are still outstanding resolved,” Majority Leader Steny Hoyer, D-Md., said at the Capitol.

Biden unveiled a framework for the package last week, a sizable investment in social service programs and climate change strategies, but Democrats are trying to negotiate immigration law changes and other final updates.

The $1.75 trillion package is sweeping in its reach, and would provide large numbers of Americans with assistance to pay for health care, education, raising children and caring for elderly people in their homes. It also would provide some $555 billion in tax breaks encouraging cleaner energy and electrified vehicles, the nation's largest commitment to tackling climate change.

Much of its costs would be covered with higher taxes on people earning over $10 million annually and large corporations, which would now face a 15% minimum tax in efforts to stop big business from claiming so many deductions they end up paying zero in taxes.

Some moderate Democrats in the House said they want to see the final assessment from the Congressional Budget Office on its entire budgetary costs, before taking the vote.